“Oh baby, do you know what that’s worth?”  $88 dollars a day!  That is the cost of the lift ticket to Heavenly, .
In my opinion, there is no such thing as a ‘bad’ ski resort.  Even a snowy mountain with no lifts is a good place to ski.  These days, people pay more to cat-ski and heli-ski in these places, so a bad ski resort is just a mountain that gets no snow.  But then you can hike, bike or maybe even kayak down it – so maybe I should say there is no such thing as a bad mountain – though perhaps that newly awakened, sleeping- for-200-years volcano in Iceland could be classed as ‘naughty’!
So, now that I’ve established that mountains are generally good, lets couple their magic with lakes and deserts, and hey presto – Heavenly Ski Resort!
Heavenly has some of the best ski mountain vista that I’ve ever seen.  Skiing down from the top of the Sky Express, it is possible to see Lake Tahoe on one side and the desert terrain on the other.  On a sunny spring day, it’s worth taking of the skis and walking to some of the views, though be careful, roped-off areas are usually roped-off for a very good reason, a fact I discovered in my very early ski days and better left for discussion in a future possible blog – “Ski disasters and extremely close shaves!” 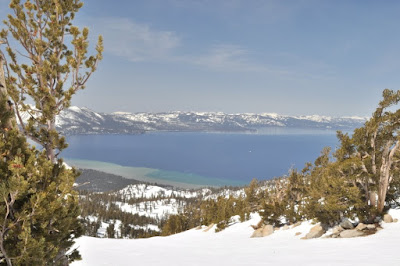 Like all the North American resorts that I’ve experienced to date, (Tahoe area and a whole bunch in , ) once you leave the base area you are on the mountain and that’s it.  Unlike the European resorts, that have restaurants, cafes and chateaus from the highest peaks scattered all down the mountainside, allowing the skier to “warm up” at any stage of their journey, the North American resorts tend not to have facilities up the mountain.  Why?  I’m not sure.  Do I like it?  No.  But for conservation reasons, it may be a good thing.  It also tends to give the skier a keener sense of being “at one with the Mountain”!  (Did I really use this phrase?  I seem to remember a million years ago slagging a spaced out snowboarder for talking like that – Oh well, maybe is rubbing off on me – though the snowboarder was Austrian and full of schnapps!)
When writing about resorts, I think about what’s important to me as a skier.  Navigability is high up there after the obvious, snow quality, lift system, variability of terrain etc.  Steepness is not a concern unless there are simply no escape routes down for less proficient skiers, or for me when I’m feeling lazy, which happens a lot these days.  And not having enough challenging runs doesn’t apply – I enjoy the easy carving stuff as much as the adrenalin pumping thigh burners on those crazy steep runs which we affectionately call “brown” runs!
In , having a car is essential to getting to the piste if you are going to go to more than one resort.  If you are going to stay put for more than a few days you’ll need to ski the large resorts.  When I lived in a ski trip lasted a week.  We went to one (usually European) resort and did the package deal thing.  Your price included a transfer from the airport to the hotel.  You never needed to rent a car, and the hotel was chosen based on proximity to the lifts and the bars.  Apres Ski is HUGE in .  You can even go for a pub crawl down the slopes.  Not so here.  And maybe that’s a good thing – at least my liver thinks so!
The three largest resorts are Heavenly,  Squaw Valley and Northstar.
Heavenly is in .  Whilst you can stay in some of the more expensive luxurious accommodations, like the Marriot at the Gondola base, South Lake caters for all pockets.  There is an abundance of low cost (low quality) accommodation.  Divided by the California/Nevada Stateline, you can choose to stay in and avail of the casino’s and their cheap accommodation too.  Smoking laws are pretty slack in so we tend to stay in the Holiday Inn Express on the side.  It is a reasonable price and provides a solid, good standard I’ve come to expect from Holiday Inn.
In general, is very busy, even during the week.  It tends to attract a young college crowd and it can be noisy at night.  Compared to the rest of the Tahoe area, it feels somewhat tacky – South Tacky!  It is as if Heavenly is just so good that the town doesn’t have to put in much effort to attract its clientele.  They’ll go there – guaranteed.
The Heavenly Ski area is big.  Like the town, it runs from to .  I get a kick out of the signs – “Welcome To…” either or depending on your direction.  This photo was taken in Janurary 2006.  It snowed the whole time and we skied the entire time in waist deep powder, though we didn’t see the view until we returned the following year! 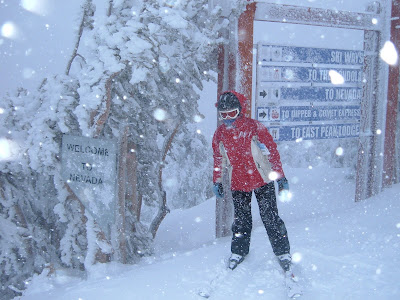 The Stage Coach Lodge, on the most extreme side (left as you view the piste map or trail guide, as the Americans call it) is a nice place to get a bite to eat though the chair lift out of here is really slow.  The side has lovely blue runs named after either chocolate bars or things from space, depending on how you look at it – Galaxy, .
I’d avoid the Gondola from the village, if you can.  The dismount area is really flat and there is a fair bit to walk to the nearest run or lift.  If you only have one day for Heavenly, start at California Lodge, go to the top of Sky Express and descend on the side first.  Explore that area then make your way back to the California Lodge side (skipping the Gondola area in the center).  One day in late December 2006, the year after we had skied in blizzard conditions for the best part of a week, my husband and I were lucky enough to catch sunset and moon rise from Ridge run back to California Lodge.
Another of my favorite runs is Powder Woods on the California Lodge side.  On the piste map it is blue.  The sign at the top says it is black.  Gradient wise it is blue, but the trees upgrade it to a black.  It is not groomed, so it is like skiing off piste.  You can take a new line through Powder Woods each time you ski it and never do the same line twice.
– 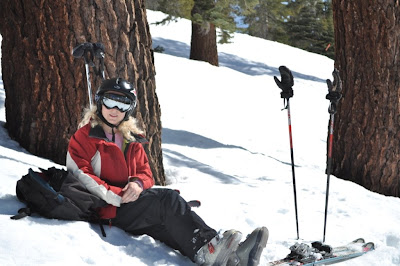 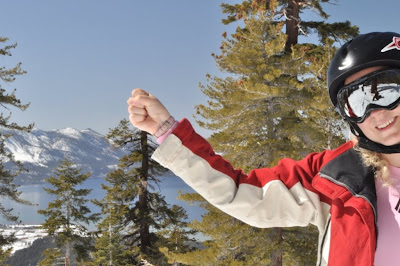 We stayed in Squaw Valley in January 2010.  This resort is on the western side of the lake, a beautiful 50 minute drive north from Heavenly, past the spectacular Emerald Bay.  We had ski-in-ski-out accommodation at the Red Wolf Lodge.  The accommodation was very expensive (over $200 a night) but gorgeous!  I love piste side accommodation.  It’s just so easy.  I was disappointed with the Squaw Ski Resort though.  The signage for the runs was bad, so we got lost often and felt glad that we could tackle whatever terrain we stumbled across, perhaps not gracefully, but we’d get down it.  I reckon it would be a nightmare for beginners!
This is me resting after walking up to the top of a hill after the slope just ran out of steam.  It was supposed to be a blue! 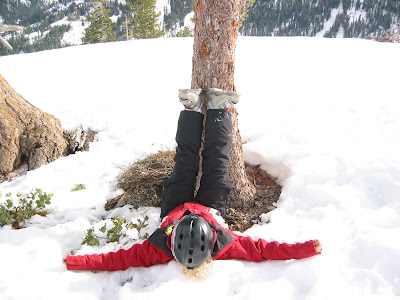 The views were amazing the day we were there.  The lake, and only the lake, had a blanket of fog so that we could look down on the clouds. 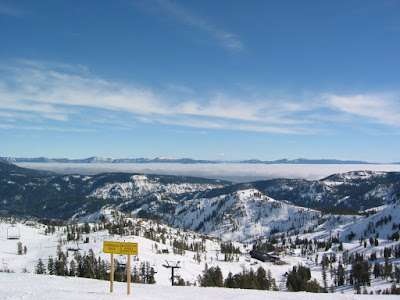 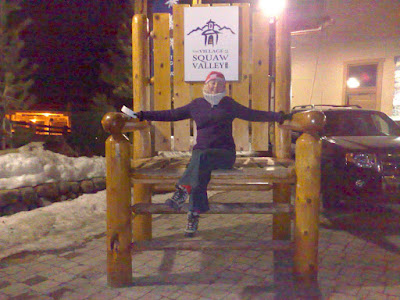 We skied Northstar a couple of years ago.  I really liked it.  I thought it would be fantastic for families (though also expensive – but once you move away from South Lake Tacky everything is!), the resort is purpose built (most are, but this one is very nicely done) and there is an Ice rink, fire pits, cafes and shops in a bustling little center village.  It would be great to stay in this resort, if you could afford it, and just roll out of bed on onto your skis.  The lift is right there!  The intermediate runs are mostly off the Arrow Express and the back side of the mountain has a couple of fun but challenging bowls.  Plenty to keep most people occupied for a few days.
Some of the smaller, out of the way resorts are worth doing.  I really liked Mount Rose, a ski resort in and very close to – a good source of great value accommodation.  It has a homely, friendly feel to it and it really has a surprising range of terrain to offer.  At $65 for a day’s skiing it is great value for money. 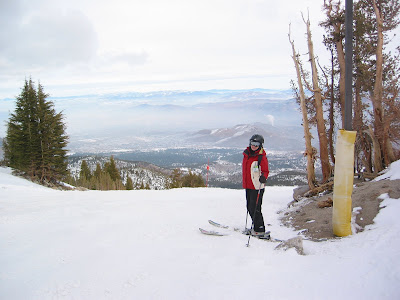 The smaller resorts tend to be cheaper.  Trying a new one each day is a great way to see the area.  You can even buy half-day tickets at a slight reduction – not half off, as the name may suggest.  If you are mad for freshies then that option is not for you.  If you are like my sleepy-headed husband, it’s a nice relaxing way to resort hop, have a ski trip and a holiday – from the girl who used to pride herself on being in the lift queue before the lifts opened and didn’t stop ‘til the last lift closed.  Once, on a school trip I was awarded a prize for being THAT keen – I was one of the teachers!  How sad.  And how times have changed…
Byddi Lee
Filed Under : Heavenly, Icelandic Volcano, Lake Tahoe, Mount Rose, Northstar, Skiing, Squaw Valley