Sometimes, it’s the small things in life that make my heart glow.  When I say small, I mean measuring about one eight of an inch (3-4mm), like the tiny cotyledons, the first leaves, of a germinating seed poking bravely up through the soil. 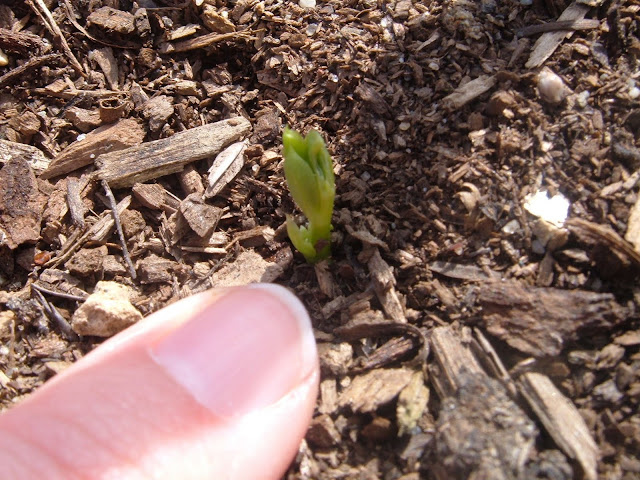 It always amazes me that a shiny, stone like seed can transform into a green, growing, living thing.  Nature’s struggle for survival is truly amazing.
Spring has sprung, and it made me think of all the ways we gardeners get things to grow.  We buy plants already started, like I did when I started my native plant shade garden.  It’s a buzz to see them prosper, get stronger and even blossom.  My neighbor, Al, dug up some oregano and chives from his garden and gave them to me. 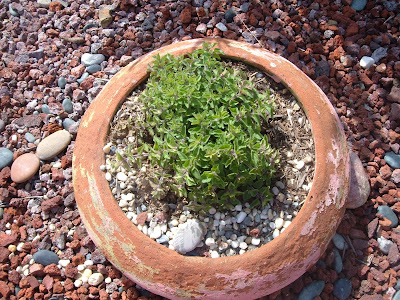 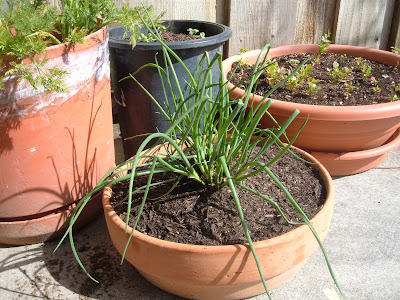 In the background you can see (from left to right) dill, basil and coriander/cilantro (depending on which country you are reading this from).
I do prefer to try to grow things from seed.  I get such a thrill from germination.  Did I really write that?  Perhaps I should get out more.  But it’s true!  And it’s cheaper. 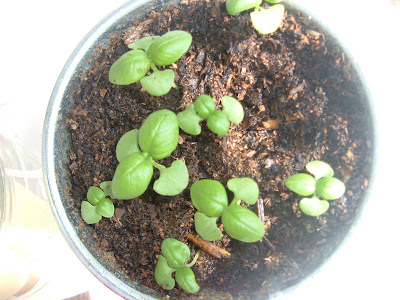 This is baby basil. Cute!
Last night, as I munched on delicious sugar snap peas, I thought about how I had put those little green seeds into the garden last October, and now we have food.  The pea flowers were pretty too.  Here are some photos that my friend and gifted photographer, Cait Hutnik, took of them. 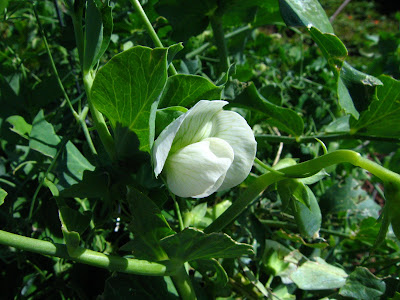 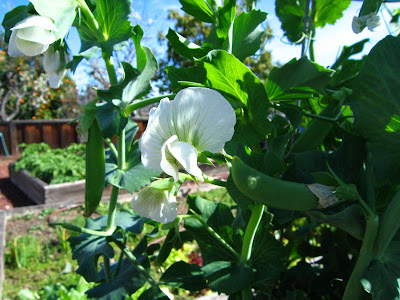 Even when the odds are against survival, nature doesn’t give up.  We had an old cherry tree with a rotted trunk.  On Al’s advice, an expert in growing fruit trees, we cut down the tree and replaced it with another cherry. 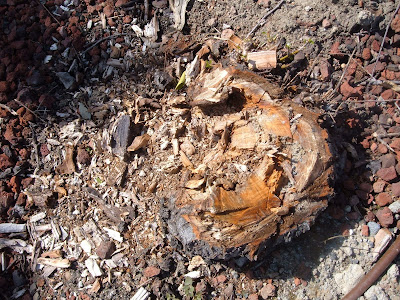 The cherry tree stump.
Cherry branches grow very straight, and I saved a few of the smaller limbs to use as rods for my newly sewn pea plants.  A week later, the buds on the twigs had burst and blossoms were flowering – the tree that grew them, long since gone.  It was as if they were ghost flowers.  Cait was captivated by these also and took some beautiful shots.  You can see more of her amazing photographs on her Light of Morn website. 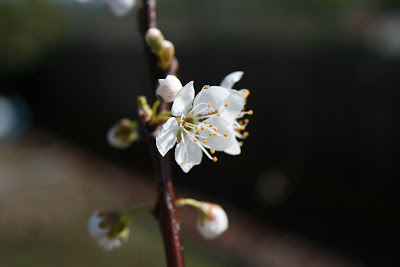 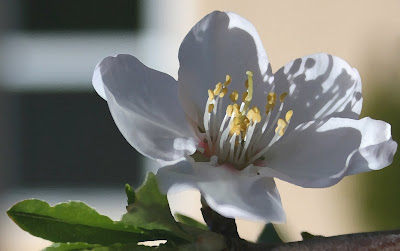 Al and his wife, Karla, helped me choose three new fruit trees for the garden to replace other trees that had either fallen down or were too old and needed taken down.  I chose a cherry, an almond and a nectarine tree.
The local adult education center had free classes in January about grafting.  Never one to overlook free stuff, I attended and was inspired to have a go.  Al knows all about grafting.  Each of his fruit trees sport different colors of blossoms on the same trunk where he has grafted different species together. 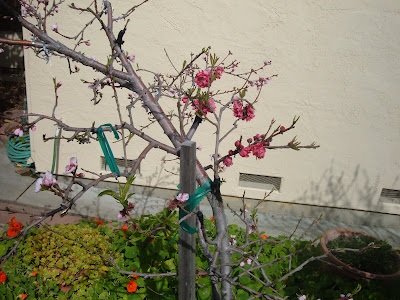 I understood the biology of it – bring two branches together, their cambium tissue (the growing tissue that  produces new cells continually, just under the bark) touching and they will fuse together.  It’s just hard to believe that if you stick a plum twig, no more than 3 inches long, onto the end of an almond branch that it will actually grow there.
Al gave me grafts or scions, as the twigs are called, for each of my new trees and showed me how to do the first one.  He had the grafting tar and tape and generously gave them to me for the other two grafts.  He told me to check the grafts every couple of days and then laughed – knowing I’d be out everyday, hail rain or shine inspecting them!  After a couple of weeks the buds seemed to be swelling, but it was hard to tell, because as Al had predicted, I was scrutinizing them on a daily basis, even multiple times a day.
First thing I did when I got back from the trip was go check on the grafts – and joy of joys, one of them had burst into leaves!  Within a few days it was obvious that they had all taken.  Another garden miracle!  And now I’m a believer….next year I plan to graft some more.

This is a different type of cherry grafted to the new cherry sapling. 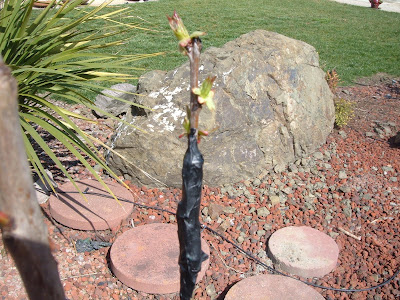 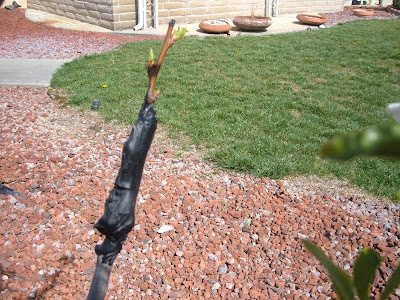 This is also one of those mystery ones!  I’m nearly certain it is plum, grafted on to nectarine. 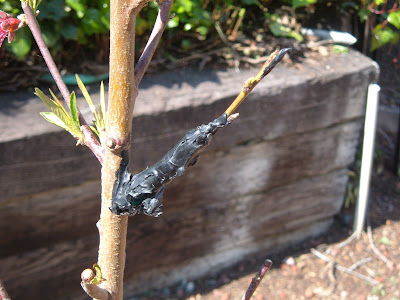 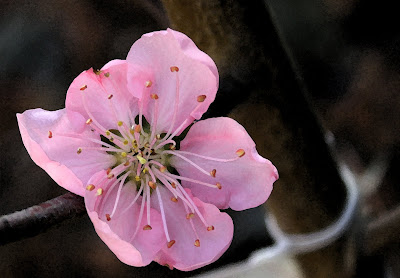 Bulbs, rhizomes and tubers also amaze me.  Bulbs look so dead when they are dormant, but grow into such beautiful flowers.  Daffodils were my Dad’s favorite flower. 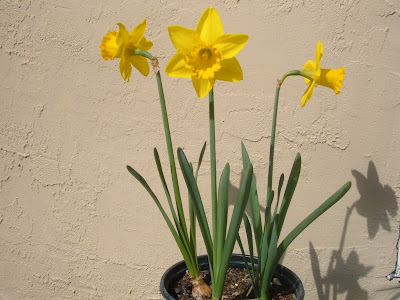 With rhizomes and tubers, you break a piece off a plant (or buy it at the supermarket – even more fascinating) and hydrate it, or in some cases you can stick it straight into the ground, and hey presto you have new, identical plants. This works for potatoes, garlic and ginger.  I bought garlic from the supermarket and just let it start growing in a cupboard.  When the shoot was about half an inch long, I planted them, last December. 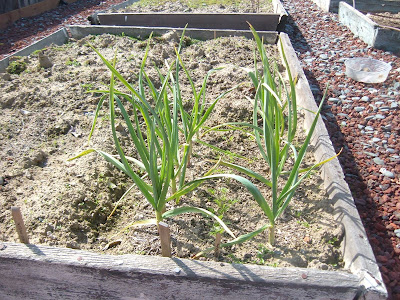 Same with some potatoes: 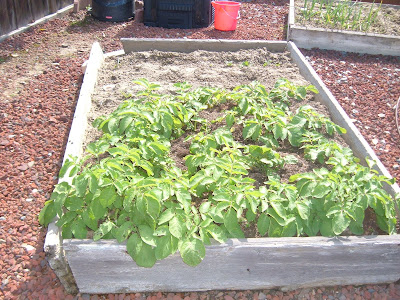 I tried it with sweet potato, and it didn’t work, but it should.  I think it was too cold when I did it, hence the gap at the end of the row where my one sweet potato plant should be (note the label!).  I’m planning on trying again when the weather is warmer. 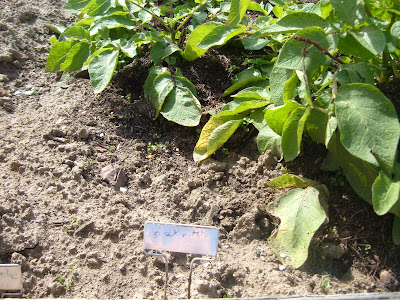 This is my first time trying ginger, and I’m only at the stepping it in water stage, though I will keep you posted. 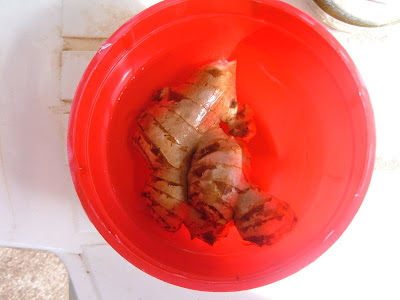 Then there are the plants whose stems you stick in water and they magically produce roots (sometimes with the help of a little rooting hormone).  I’m trying this with lavender and rosemary, though the lavender looks like it is wilting.  The rosemary looks happy enough.  Notice the fancy designer plant pot! 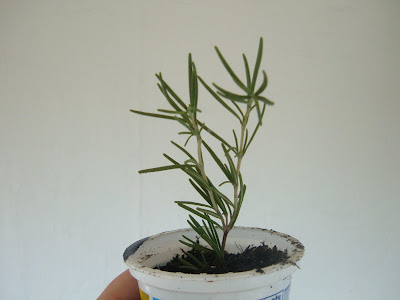 Lemon grass falls between this category and the next – I’m soaking the very bottom of its stem, i.e. where its roots would have been before they were cut off.  According to ‘You Grow Girl’, roots will develop and I can grow this also at home.  My grocery list is getting shorter and shorter! 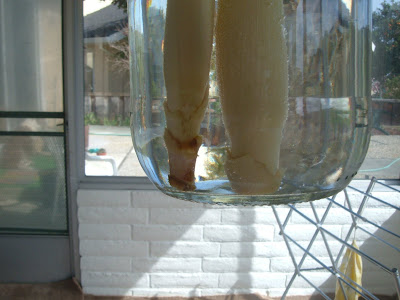 My spider plant is magnificent!  In fairness, it’s nearly impossible to kill a spider plant, although my green fingered mother is the only person I know of who has achieved it. 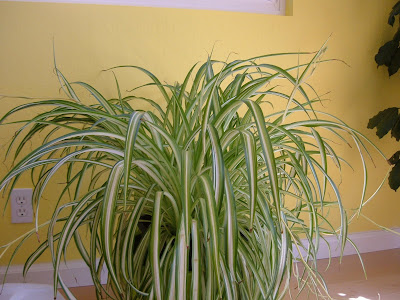 I love when it produces babies.  I pot them up and give them to friends.  Even my friend Eileen, the self proclaimed, notorious plant murderer, has managed to keep the one I gave her alive! 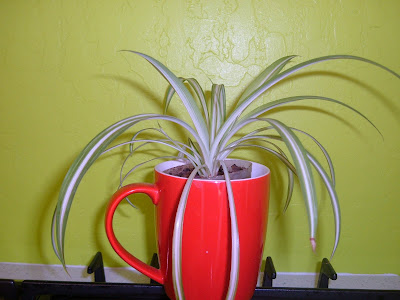 Here is another example of vegetative propagation – aren’t the babies cute!  This was a present from my friend, Thanh, who has a veritable nursery of succulents and their babies. 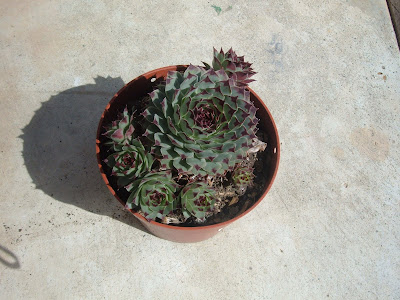 Many succulents and cacti do this.  It works well, especially for cacti that may have to wait a long time for rain to germinate seeds.  They clone themselves, and as their environment is usually very stable and doesn’t change much they are not disadvantaged by the lack of variation typical of asexual reproduction.
Isn’t nature just magical – and if these examples weren’t proof enough, here is the view from my garden one rainy day last week, some where under the rainbow. 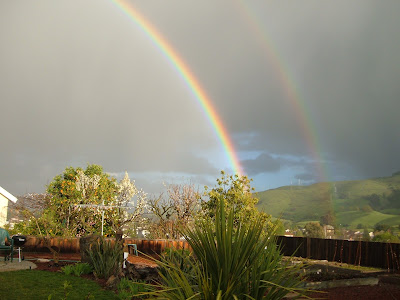 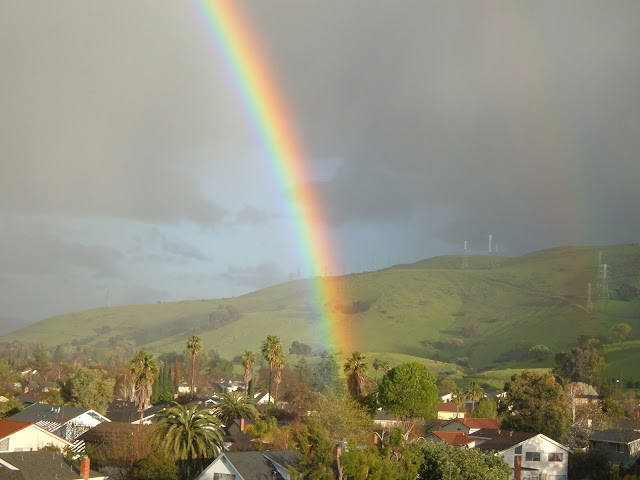