The conversion of the front yard has begun!  I’ve been doing lots of research about this conversion – reading up on it, online searches, attending talks and chatting to people who know about these things.  The chatting part is always the most productive!  I spoke to a lovely lady called Chris recently at a California Native Plant Society (CNPS) meeting who advised me to plant my new natives in the fall to coincide with the onset of the next rainy season.  Music to my ears!  It gives me time to rip out all that old invasive privet, ivy and poisonous oleander.
These pictures are taken with the front of the house behind me and to my right.  The first shot shows some of the ivy. 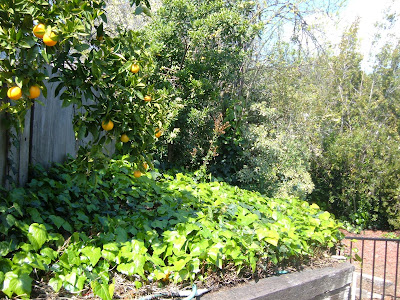 Scanning right you can see “the jungle” and a privet hedge that bisects the front yard. 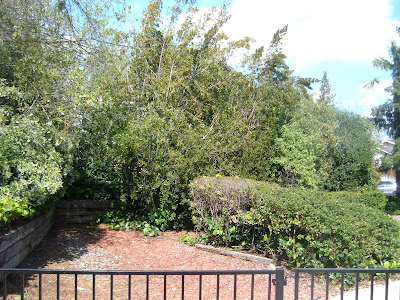 Continuing to scan right, you can see past the privet hedge, over the lawn to the Douglas Fir which, thank goodness, is native.  The palm tree beyond is not, but we’ll keep it. There is one on either side of our drive way – like gate posts!  Notice the thicket beyond the lawn to the left of the picture. That’s all coming out! 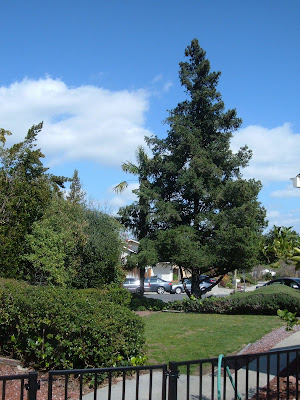 The idea of removing all that brush and shrub fills me with glee and dread simultaneously.  I weed whacked a patch of the ivy (approximately 8’ X 10’), and it was very satisfying to start to see what is under there, but knowing how stubborn ivy is, I need to dig it out.  A harrowing thought.  “Character building!” my husband says, but it’s alright for him to talk, sitting in his air-conditioned office at the height of the San Jose summer whilst I’m fighting back the ivy.  Mind you, I wouldn’t trade places!

The day after I removed the top of the ivy, I saw a rat running around looking completely –well – uncovered – bare, as if he’d just stepped out of the shower, and someone had whipped away his towel.  I’m not bothered by rats, and in fact, I think they are kind of cute.  This little guy looked all around the newly whacked area, and I felt bad for destroying his home.  He even checked out under the car and roamed across the driveway – a brave move considering the number of hawks we have circling above here everyday.

One day recently, I was out there with the camera taking photos of the resident scrub jays.  The privet trees, grown way past shrub size, and hedge area were a hive of activity.  I could hear rattling in the undergrowth/ivy, probably the rat – far too fast to snap.  Birds were chirping, and Mr and Ms Jay were being a cooperative models. 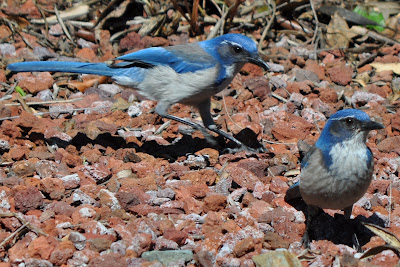 A flash of shadow from a huge bird above us, a collective frantic rustle – then, nothing.
The garden seemed empty of life.  I imagined the little creatures all hiding, beady eyes peeking out from under their selected leaf, little hearts pumping, moving the fur or feathers on their tiny chest, all with one question in their wee brains, “Is he gone yet?”

They have more patience than me – their lives depend on it.  Nothing moved again for ten long minutes.  Impatience got the better of me.  With the lack of any critters to take photos of, I headed back inside to read my emails!  From my perch at the computer, I could see the garden come back to life with a squirrel dashing across the lawn then doubling back to dig a little and then bury something.  The jays resumed squawking, and the smaller birds struck up their twitter.  This was their home I was going to be messing with.

After some contemplation about this I decided that, yes there was going to be some upheaval to the really, really local wildlife.  When I’m taking a “break” from writing I stare out the window at the front lawn.  It has numerous visitors, and I worry at disrupting them.  The bushes and shrubs are home to a host of critters.  The jays that live there won’t be happy, nor will the squirrels not to mention reptiles, smaller birds and mammals.  But in the long run they will be happier in amongst the native plants.  It’s like renovating a home –fraught with hardship and hassle, but so worth it when the work is all done.

I bought new loppers, having broken my old ones pruning the pomegranate tree at the start of the year.  In one hour I was able to devastate the entire privet hedge that divided the front yard into two.  Merely an aesthetic job, in so far as, I haven’t tackled the roots, but it gives me a nice idea of how the garden is opening up.  It amazes me how a small tidy bush has so much in it when you pull it all apart.  The pile of debris was twice the size of the original hedge! 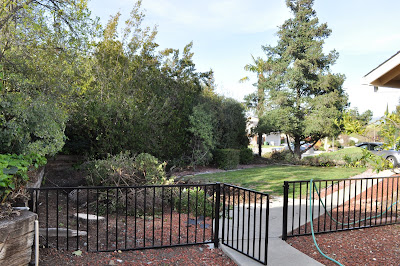 Next, I decided to have a go at the start of the area I think of as “the jungle”.  It goes about fifteen feet back to the neighbor’s fence.  Ivy covers the ground and scraggly wannabe tree-shrubs are amassed in a thicket.  I used my trusty loppers to remove the branches as far up as I could reach – it towers above me at about 25 feet tall, maybe more – I suck at guessing distances! 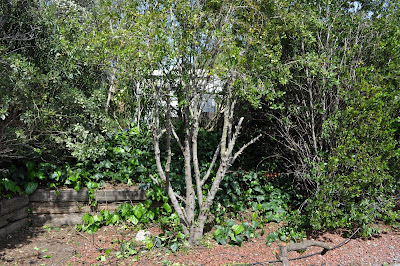 As I broke through the first wall of branches, I was rewarded with an open area.  If I’d been 12, I’d have built a fort here!  The ivy leaves were the size of dinner plates and came up to my knee.  I made a lot of noise with my feet.  I didn’t want to come upon a sleepy snake, and I wanted the rats to get plenty of notice of eviction! 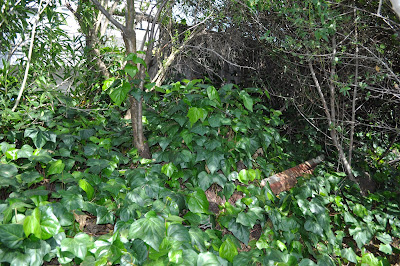 Above me were branches with blossoms at their very tips, flowering where they could find a patch of light.  Buried in the jungle is a brave little plum tree that I may just think about salvaging.  I’m not sure how it will rub shoulders with the natives, being non-native.  But this tree with its pretty flowers, blossoming against all odds, struggling for the light and slowly being strangled, seemed somehow honorable! 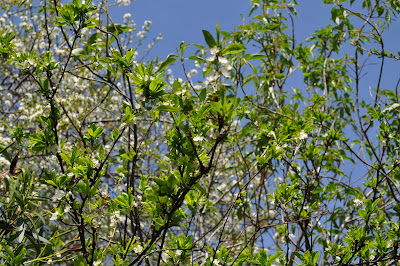 As the day cooled into evening, I took another walk out to see my days handiwork.  High in the branches of the trees still standing in my yard, sat a host of little birds chipping and chirping.  It felt like they were scolding at the disruption.  A mocking bird perched on the sawn off end of a branch and cocked its head first one way then the other as if measuring me up for size.  Its better this way, I said in my head, sending the critters in my yard the telepathic message – I feel so privileged to have my part of this planet, and I promise to make it better for all of us. 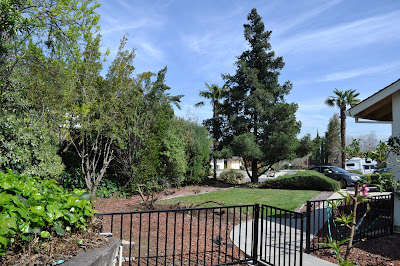 1 reply to Taking control of my part of the planet