The Peas Treaty
So it is by now well established that I hate slugs.  Slugs are stealth experts – they strike in the dead of night and the only ones I’ve actually seen were the ones that drowned in my beer.  They had smiles on their slimy little faces!  Then there are their comrades-in-arms – the tough(er) guys of the mollusk world, those warriors with armor plating (relatively speaking!) – Snails!
I discovered where the snail’s headquarters are.  They’ve been hiding in two places – one is an old privet bush that I decided to take out.  Why oh why can’t the snails eat the privet leaves?  The blighters were camping out there but not actually eating the horrible bush!  Typical.  I can’t figure out why someone hasn’t decided to genetically engineer snails and slugs to prefer to eat weeds and invasive species – what a gardeners dream!
I don’t like to actually directly kill anything.  Spiders in the house – Allan deals with those.  The garden is my domain.  Beer is kind.  Sluggo is discrete and quiet – not that squishing a slug isn’t – its not as if they scream or anything.  Generally you don’t see the slugs.  But big brazen snails – they are a totally different kettle of gastropod!  I couldn’t bear to squish the ones I found in the privet –that whole cracking shell thing gives me the hee-bee-jee-bees – but what to do with them?
As I came across them I set them up on the bird table but as the afternoon wore on, can you believe it, they were escaping?   How sad a guard am I that 6 snails made a run, a snail run and almost made it?  And where were the birds and lizards that pose so nicely for photos when you need ‘em – probably off getting their facials and manicures! 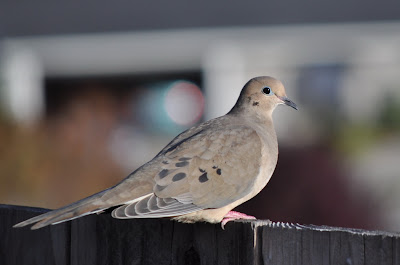 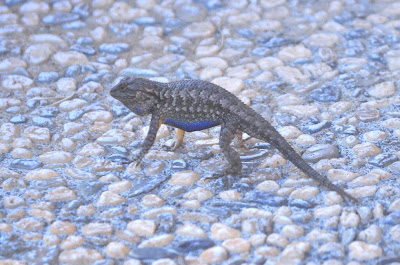 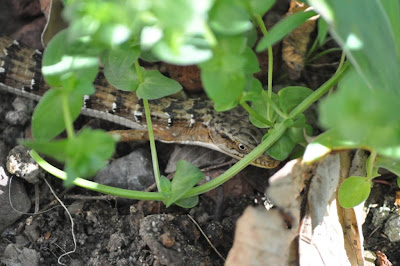 We had a great run with the sugar snap peas… I planted them in October and we ate peas constantly right up until last week.  In the early days, we were eating mainly pod and tiny peas inside.  Later, we shelled the peas and they were still delicious. 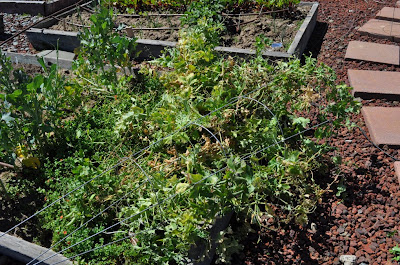 With the peas finished it was time to take out the old yellowing pea plants and put them in the compost – and that’s when I found the snail mother ship!  I picked up a snail that was nestled in between a leaf and a stem, and it pooped on my finger.  I dropped the snail and was left with a tiny perfectly formed snail turd (not that I’m an expert on snail turds) on the tip of my finger! 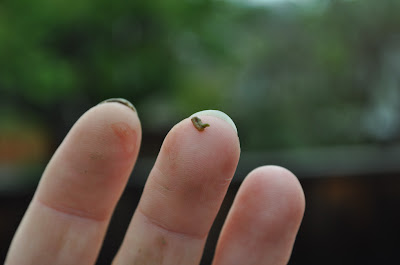 Talk about adding insult to injury!
Some of these snails were massive and there were tonnes of them!  Now I know who has been eating all my lettuce.  I felt betrayed by the peas for harboring the snails.  There I was, giving peas a chance and now this!
And it was nigh on impossible to bring myself to kill them – they possess a quirky beauty all of their own.  And not a bit of wonder they are so beautiful what with all the good food, not to mention the drink, I’ve been supplying them! 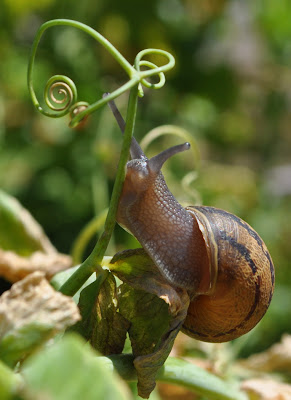 My little book on how to kill slugs suggested throwing them in the compost bin.  Apparently, they tend to stay with the bin because it is full of goodies.  The pea plants were headed that way anyway, so it wouldn’t be that cruel.  Once there, the inmates headed straight for the walls, as if they knew they had to escape! 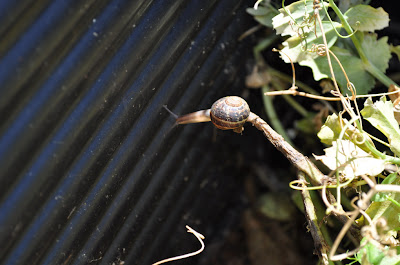 Few days later, I caught a stunt snail trying to walk the tightrope to escape.  I guess no-one likes to have their freedom taken from them – but it’s either that or the death sentence – if I could find a reliable executioner! 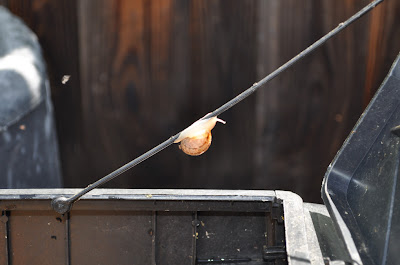 And if you look closely you can see he has a passenger.  No ash cloud is going to stop this guy! 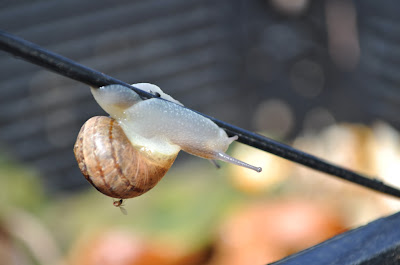 This past week I also decided to prune the big orange tree at the side of the house.  Those top branches had so many oranges that we were able to juice them, producing 5 liters (1.3 gallons).  We froze it so that we can enjoy our own fresh orange juice year round.  There are still plenty of oranges left on the tree for us to enjoy now. 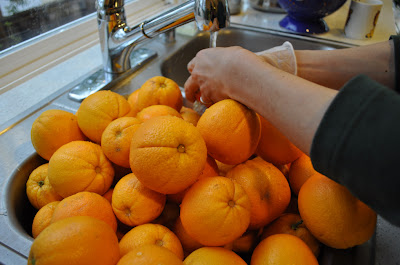 The peas and carrots are finished up but I’ve new batches growing – I’ve been staggering when I plant things so that I have as close to a year round supply as possible.
We’ve also been eating the following produce from our garden:
lettuce (many different types)
broccoli

spinach
kale
beetroot (one raw beet and six oranges makes a delicious juice for two – and it’s a lovely pink color too!)
Radish – though I gave them to Al because we don’t like them – I only grew them as an experiment to see if the 2001 seeds would germinate – they did!
Potatoes
Lemons
Limes – though strictly speaking these last two are our neighbor’s trees.
I’m looking forward to the warm season vegetables.  Some of these I’ve never grown, nor even seen growing before.  It’s going to be a whole new adventure.

The front yard is progressing painfully slowly but progressing nonetheless – more on that another blogtime!

4 replies to The Peas Treaty