I attended a Master Gardener talk on container gardening a while back.  Not that I don’t have plenty of room to stick plants in the ground, but initially, I wasn’t sure where I wanted to put things.  I have this vision of growing garden ‘rooms’.  There’s the vegetable patch, the native garden at the front, but I also want a butterfly garden, a spring bulb garden, a small ‘needs watered’ flower garden (for pretty pretty!) and underneath the bedroom window, I dream of planting a night scented garden.  So until I get all that in place, container gardening sounded like a plan.  Also, it’s a good way to grow those plants that are inclined to invade the garden, like a lot of herbs.

The front of my house has a bench all along it that I thought could be used to display plants in containers.  Inspired by the aforementioned talk, I decided to get creative and went to a Goodwill store.  That’s a charity store for us Europeans.  For under $30 I picked up four baskets, one decorative wooden box, a blue wire frame thing, another wire basket with beads on it, two cute miniature metal pails and a miniature milk urn.  I am well aware that putting moistened soil in many of these vessels will spoil them but at an average of $3 each I thought it would be worth it.

We-ll, kind of…  I just could not condenm this gorgeous basket to rotting.  I now use it to gather in my harvest.  It sits on the back door step (the sun will take its toll on it over time). I keep my trowel and secateurs in it – I regulary lost these items by setting them somewhere random – now they have a home. 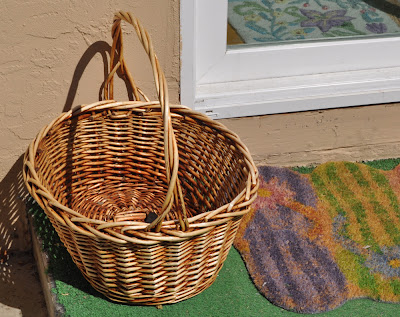 And this lovely basket was great for a table display at a BBQ I had, and I just couldn’t pull it apart – I’m thinking with some added foliage it might make an attractive Thanksgiving centerpiece. 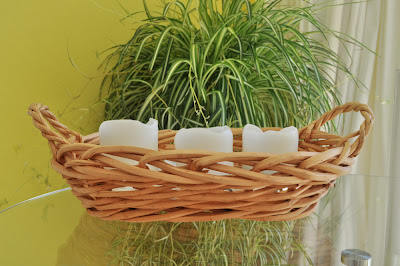 So, this was the first of the baskets that I actually potted up.  A trip to the garden centre and another $30 later I arrived home with way too many chrysanthemums and annuals, such as snapdragons, dianthus, dahlias, moss rose and alyssum.  I lined the basket with a plastic bag that I’d put holes in the bottom of to slow down the rate at which it will fall apart. 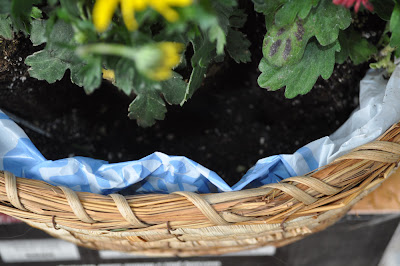 Then I chose an autumnal color scheme of mums. 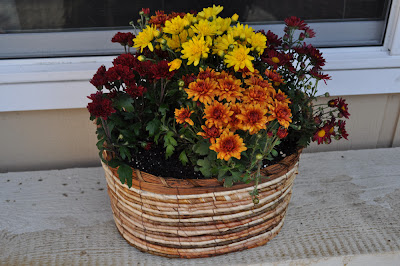 The fourth basket I just planted with a Native Australian Grass that Rosella gave me.  I think I’ve over watered it though – it seems to be struggling. 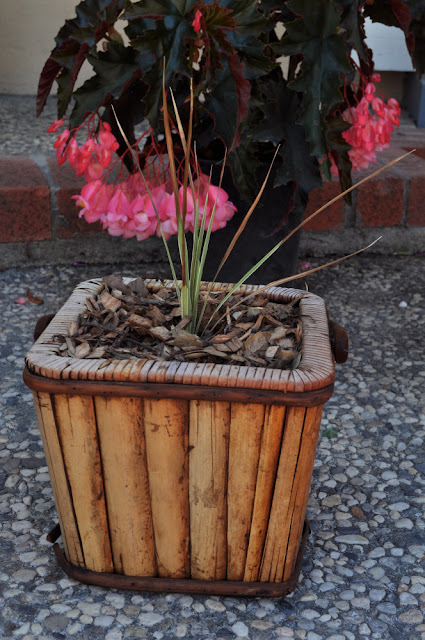 I had slipped an interesting couple of vines that Laurie and I had come across on one of our walks.  In both cases they had grown over onto the street and I didn’t think that anyone would mind if we took a couple of tiny wee cuttings.  Of course I got them mixed up.  But three out of four of them took, so I wanted to put them in the big wooden box.  My husband drilled a few holes in the bottom – not that I can’t drill a few holes myself, but he likes  to play with his toys!  I put  an old weathered plank in there that I’d found in the front garden for the vines to grow up. 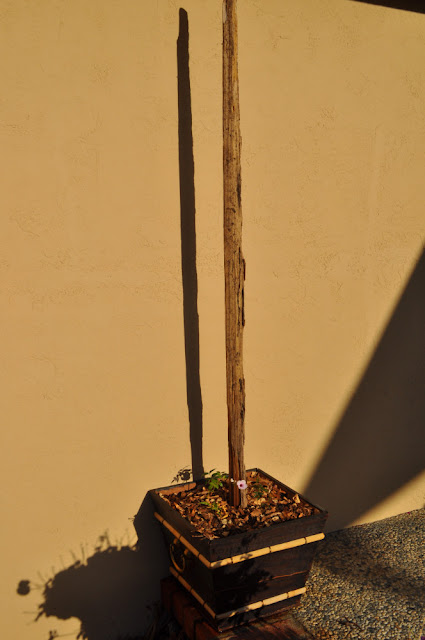 One vine in particular was very happy.  It blossomed.  I don’t know the name of it, and if you do know please  drop me a comment.  The other vine is jasmine.   It hasn’t blossomed yet and has lost a couple of leaves.  Fingers crossed it lives. 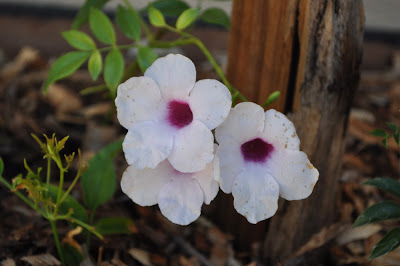 I planned on lining the blue wire frame thing with moss but I’d so many mums left over that I just plonked one in to it in a pot.  I think my report card on this one should say “could do better”! 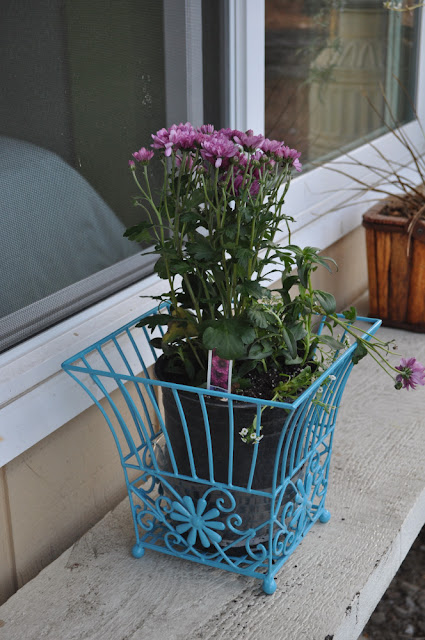 The wire basket with beads is a similar story – I have it in the bathroom but the clear plastic drip tray, showing the dirty water, takes away from it… “must try harder” 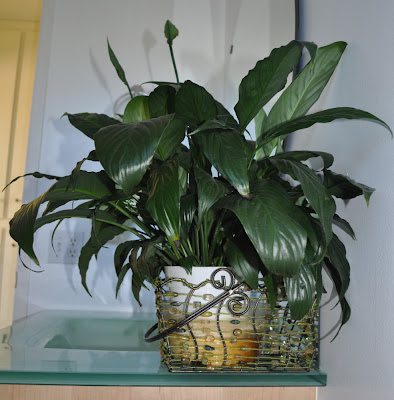 The cute pails are good plant pot covers.  They have no hole in them.  They are also handy for scooping seeding and potting soil out of the bags they come in.  They spill less than the trowel. 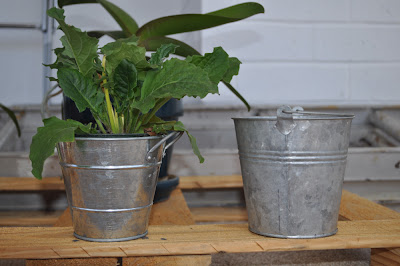 This snapdragon looks cosy in the little milk urn! 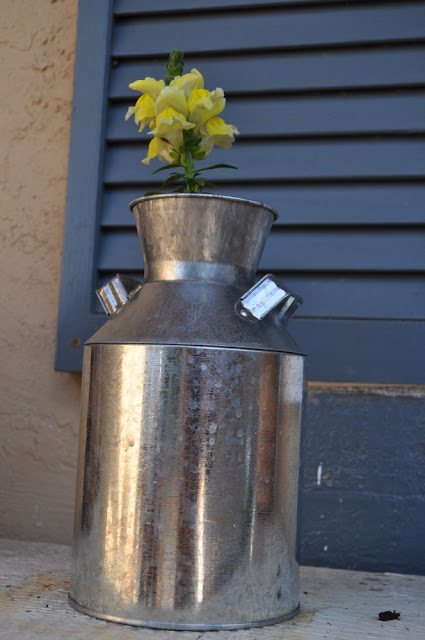 I had a metal box left over from flowers that were sent to us when my mother-in-law died. I punched holes in the bottom of it and planted it up with dianthus. 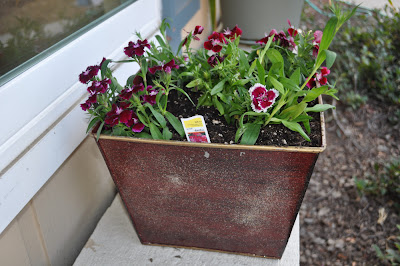 The rest of the plants I used to spruce up the Sam Maguire – seeing as how the real one is on its way to Cork – Maith thu, Cork. 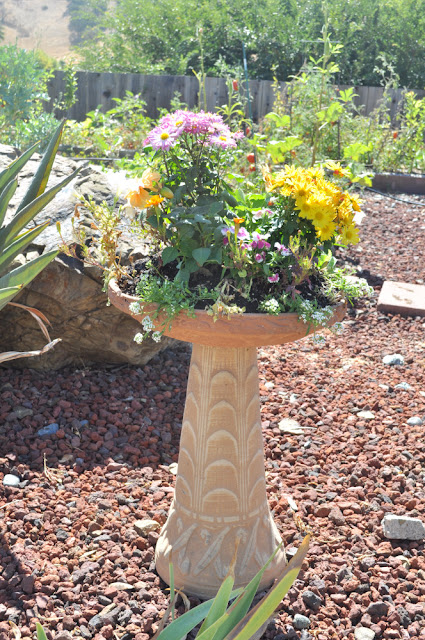 I set all my containers on the shelf at the front of the house and ‘oohed and aahed’ at them for a day, until I realized that these flowers need 6+ hours of sun, and this was too shaded. 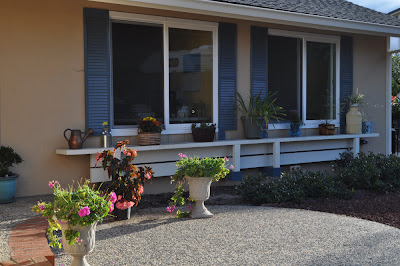 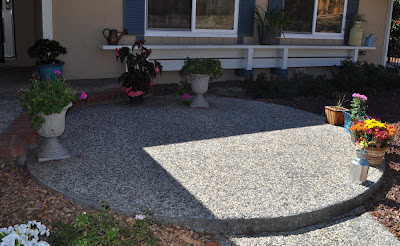 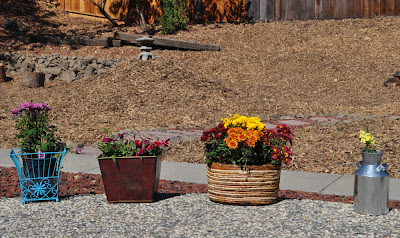 And I get to start the whole process again and pot up some begonias and fuchsias.  Please leave me a comment if you can think of any more showy flowers that love the shade…

9 replies to Finding it hard to contain myself