Many tourist hot-spots create such a draw that very often beautiful places near them are largely ignored as people swarm to see the more famous sights.  This happens with Yosemite National Park.  The surrounding mountains and towns tend to get very little airtime, so, taking the road less traveled we decided to do some exploring in and around Oakhurst, California.  Nestled in the Sierra Nevada foothills, the town is fourteen miles south of the entrance to Yosemite and the Mariposa Grove.  Next week, I will blog in detail about Yosemite.

Curious to explore some of the road that we had traveled along a couple of weeks ago, we headed south for Gilroy and picked up the 152 heading East.

The first stop was Casa de Fruta. Here we bought some treats to eat on our trip.  I’d heard a lot about this place but was a little disappointed at the quality of the fruit, considering the high price we were paying for it.  Put it this way – it wasn’t going to become a traditional stopping point for future road trips.  However, the Halloween display was cool. 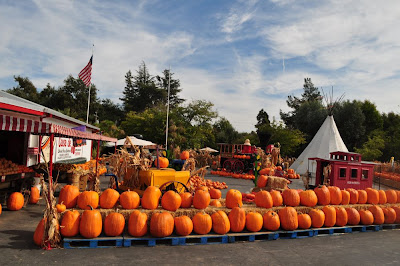 Kids might get more out of this stop than we did, though it did provide some good photo opportunities . 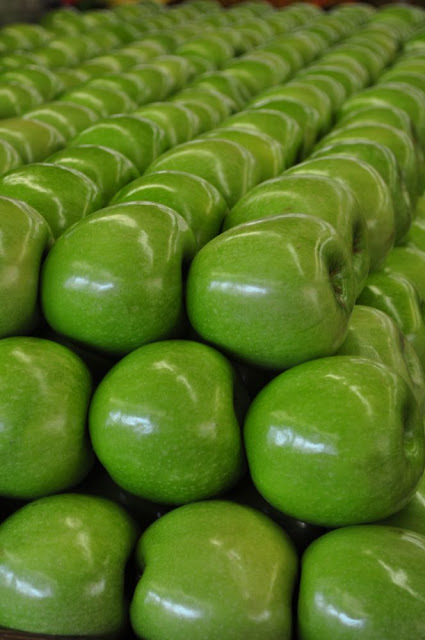 We definitely won’t run into any vampires here! 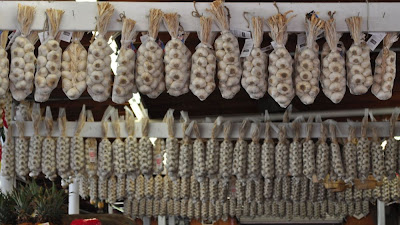 Next, we stopped at the San Louis Reservoir visitors center.  They have lots of displays, nice toilets but no coffee shop.  It seems that Californians are adverse to coupling coffee shops (or indeed restaurants) with views!

The San Louis Reservoir is the largest off stream reservoir in the USA.  Off stream just means that it is not sited on a river nor does it get significant surface runoff. It’s water comes from the Sacramento-San Joaquin River Delta via the California Aqueducts – those huge canals I saw on the last road trip. 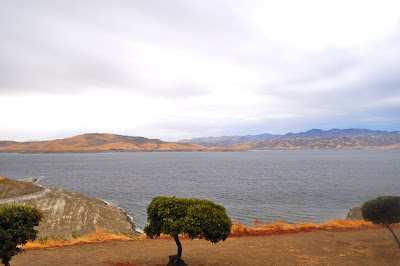 The dam is the fourth largest in the USA – though I can’t figure out why they needed a dam if they aren’t damming a river.  Maybe, they were just intending to make a great big bowl to store water in. 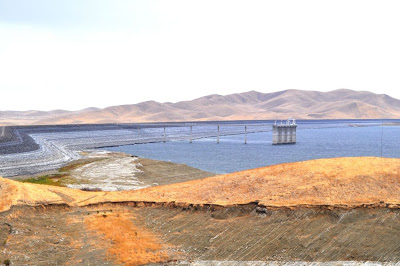 On the way home we stopped at the lower side of the lake, under the dam and had a nicer sky to play with. 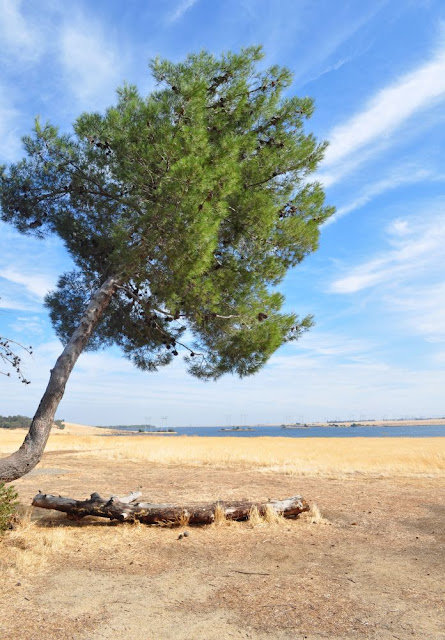 Onwards East, we continued along route 152 as the hills gave way to the flat expanses of the Central Valley.  We decided to cut of the main highway and travel as the crow flies to Oakhurst, through Chowchilla and avoiding Madera – the way Jane, our GPS, was suggesting.  We reprogrammed her for shortest route and were told to take Road 7.  It never fails to amuse me how people gave up actually naming roads here and just gave them numbers.  In areas of Ireland there are more than one name for many roads and places.  The Irish name, the English name and some even have nicknames e.g. Derry, Londonderry and Stroke City!  Perhaps the Americans could hire a few Irish people to name their streets for them… It felt like we were in a Harry Potter book when we came across 23 1/2 Avenue! 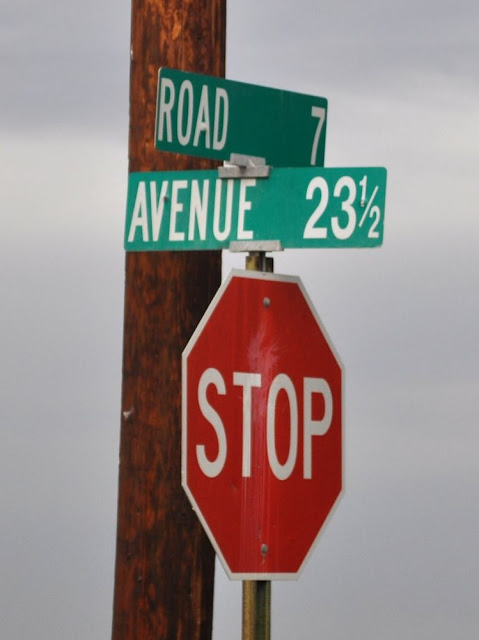 We just had to take that road.  It took us mostly through orchards and had a very lonesome feel to it as we were the only car on this road.  My husband watches way too much Criminal Minds, CSI (all three of them), NCIS(both the original and NCIS LA), The Mentalist and Bones. Basically, if someone hasn’t been gruesomely murdered in the first five minutes of a show, we tend not to watch it.  Avenue 23 1/2 totally creeped him out!  He was convinced that we’d get stopped by an axe murderer here… 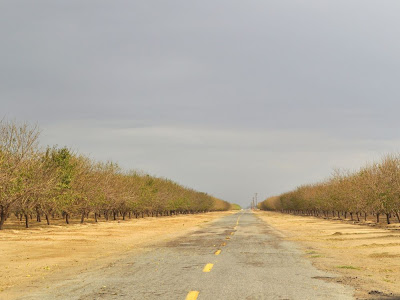 Perhaps he wasn’t too far off the mark – we were approaching Chowchilla.  I’d done a little research on the place before we decided not (definitely NOT) to stay there.  Chowchilla seems to be best known not just for it’s two women’s penitentiaries but for a horrific kidnapping in 1976 of a busload of children aged 5 to 14, along with their driver.  The bus turned up empty, the 26 kids and one adult having been transferred to a  van and entombed in a Quarry in Livermore.  Fortunately, the driver and the children were able to dig their way out and all survived.  Happily, (though perhaps not for them) the kidnappers were found and were sent to prison. 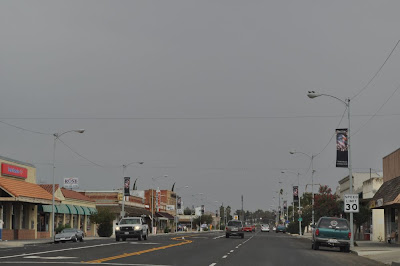 Chowchilla looks like a normal little town.  One last comment though – The name “Chowchilla” comes from the indigenous tribe of Chauchila and translates as “Murderers” referring to the warlike reputation of that tribe.

Maybe my husband sensed it in the air.  Luckily, we were fine!

After Chowchilla the landscape buckled into hills again. 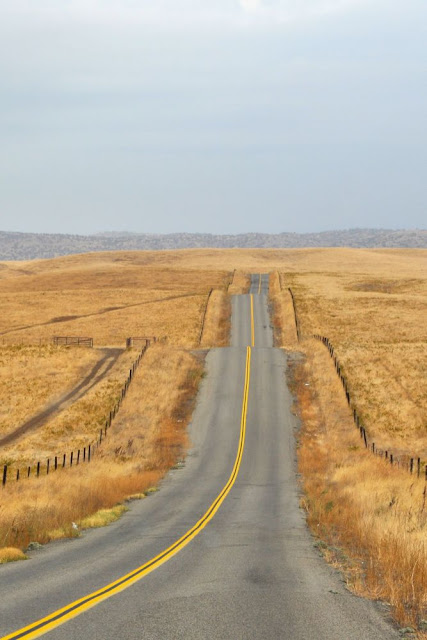 I liked how this road exactly matched the shape in the sign! 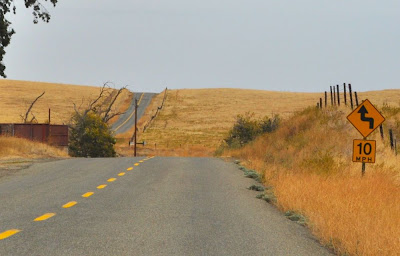 We stayed in the Queen’s Inn in Oakhurst.  This delightful, family run business also has a winery on the premises. 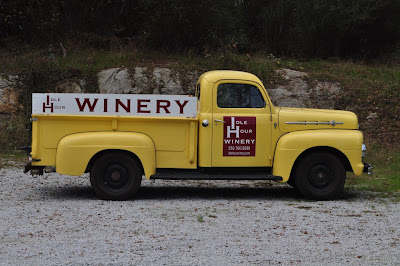 We booked into the suite because it had a jacuzzi tub, and because we intended doing lots of hiking thought that the tub would be a God send (it was!).  The free WiFi, as advertised, was very weak in our room.  This turned out to be a cloud with a big silver lining as it meant that we didn’t spend our down-time glued to our computers.  The staff were very apologetic and bent over backwards to make our stay as comfortable and relaxing as possible. We were able to get internet connection quite easily in the comfortable foyer/main office of the Inn and so could use it when we needed to. 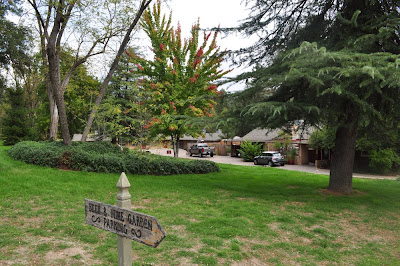 The rooms were beautiful with fresh modern decor, lovely paintings by local artists and each had french doors that opened out into serene grounds by a river. 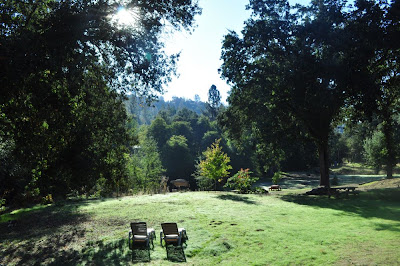 There is a gorgeous little wine bar and beer garden attached to the Inn.  It a great way to spend the evening, enjoying the wine they make – aptly called Idle Hour, and making friends with the locals. 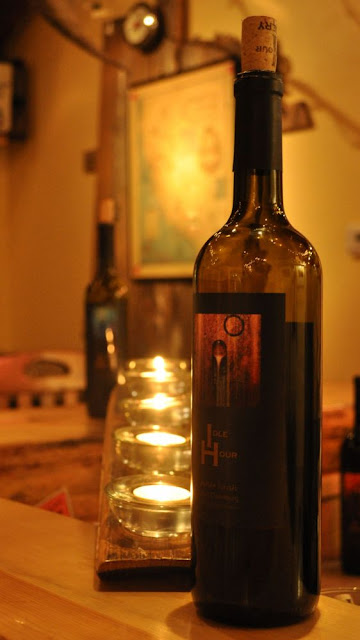 When we weren’t drinking wine, we took to the car and explored the immediate area.  Oakhurst is really handy to Yosemite, where we spent two days hiking, but the third day we decided to suss out Bass Lake.  This is another man-made lake and they are working on the dam at the moment, so the lake level is very low.  Definitely more of a summer spot, the lake front was quiet and we stopped at the Pines Resort to have lunch at Ducey’s.  I could see this place would be great for familys at the height of the summer, with cabins close to the lake and lots of water sports to keep all age groups entertained.
As we consulted our map for our onward journey, I spotted a place nearby labeled ” Exact Geographical Center of California” and we just had to go! 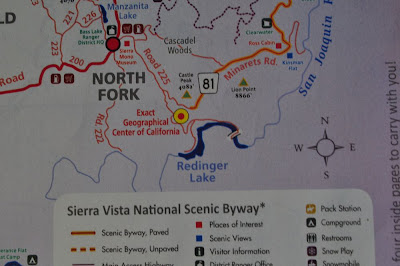 We weren’t disappointed.  The drive was spectacular and there was actually a marker to show us the exact spot! 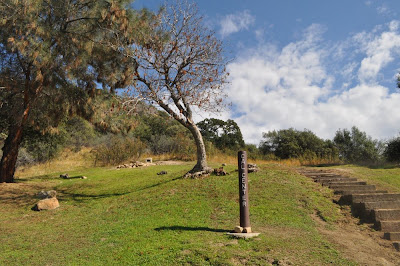 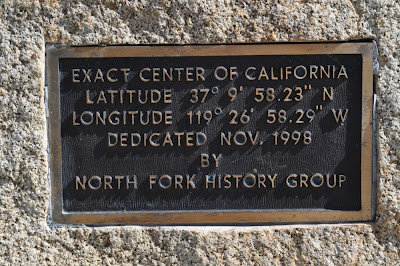 We drove on to Redinger Lake, down a one-car-wide lane. 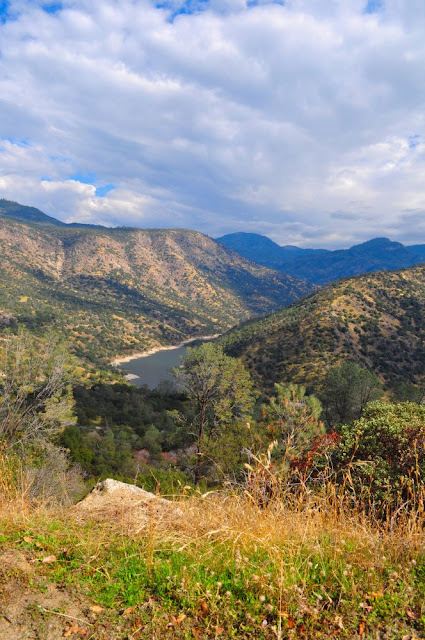 And across a rickety bridge 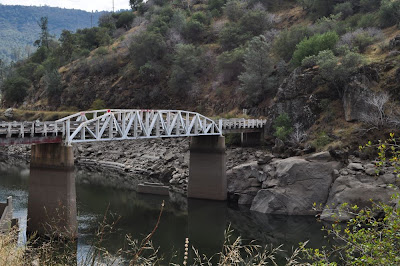 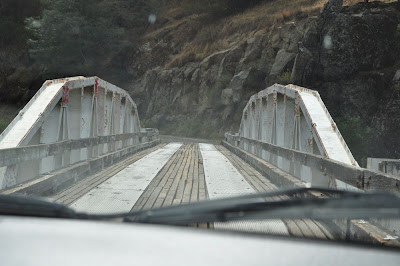 But then I tend to have a thing about driving over bridges – you should see me crossing the Bay Bridge – white knuckles on the steering wheel – even if I’m not the driver!  And I have not attempted it since they put the s-bend in it, especially after that poor lorry driver plunged over the edge.  I see that to avoid any similar court action this bridge has warned truck drivers not to do that. 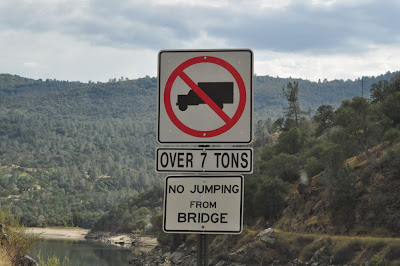 But what a view from the bridge… 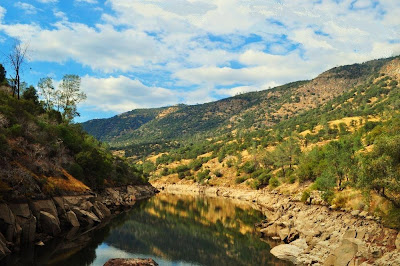 Safely across the bridge we continued through beautiful Californian foothill vistas. 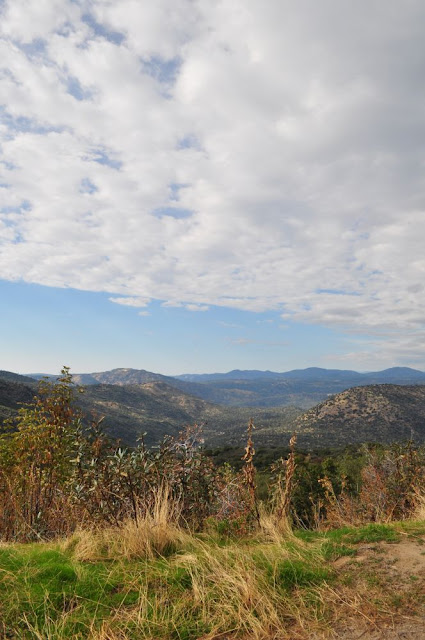 It was really remote and we saw no other traffic.  I wondered that my Husband wasn’t as worried about axe murderers here.  Even after we stopped to take photos of the above view and found this by the side of the road! 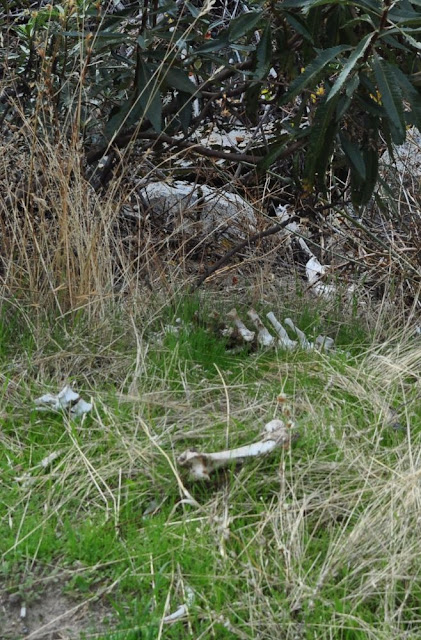 Non human, thankfully.  We were happy to get back in the car and keep driving, though I couldn’t stop snapping pictures out through the window.  Most I had to delete, but some did capture that feeling we had of being on top of the world. 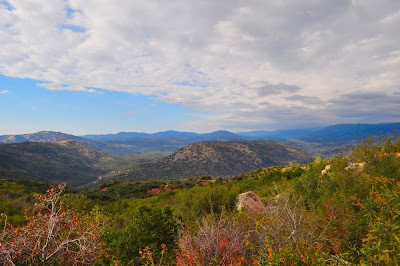 California continues to amaze and delight me.  Every fold in the land has stories to share and secrets to unravel.  If these here hills could talk, maybe the tales would be worth as much as the gold they hold.

3 replies to The ways of the road