Honest to God, you’d think it was the end of the world here.  The News has carried it every night in their headlines, urgent voices warning of the destruction that is imminent, and whilst it’s not quite the end of the world, it has been the end of my zucchini, eggplant and pepper plants – FROST!

When I gardened in Ireland, I never held much hope for a winter crop.  I was too cold and too lazy to plant anything in the autumn, and when the freezing temperatures, hit I did not much mind what happened to the garden.  Springtime would come and I’d start again.

Here it’s different.  If I’m careful, I can have stuff growing all winter that I couldn’t grow in Ireland.  But the question is, what will survive the frost and what won’t?  I’m looking froward to the Master Gardeners program to get a more definitive answer to that question.

Last year, I took precautions when we had the one and only frost warning of the year in December.  I put bubble wrap over the lettuce, and they did really well surviving well into the hottest part of the summer before bolting. I’d heard that if peppers are protected from the frost they can be perennial, so I decided to wrap them in bubble wrap – some of them still had fruit on them.  I also wrapped up the egg plants too, more as an experiment than anything. 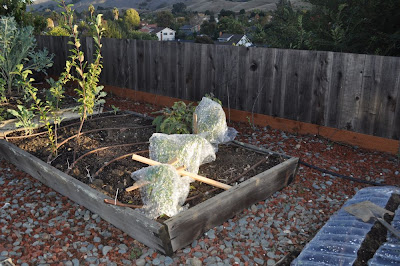 I also covered the little potato plants that had sprouted.  Notice the cherry tree growing in this plot.  I pruned this off a cherry tree that was dying and in the end needed to be cut down.  I used the cut branches as supports for peas and they blossomed!  It is still growing strong, and I’ll move it, and three others like it, in Janurary. 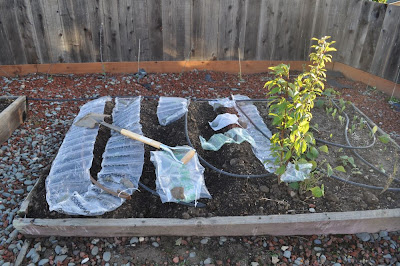 I had heard that you just need to cover the plant to protect it from frost, and that frost drops straight down. So I didn’t worry about the pots that sit along the front under the eaves of the house.  I did experiment with other covering devices, like upturned buckets, 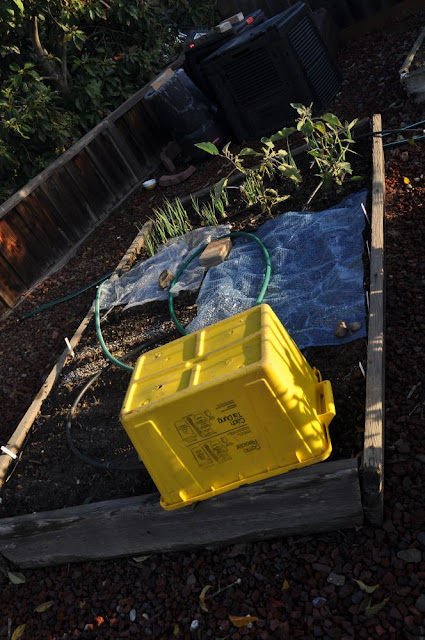 and even garden chairs. 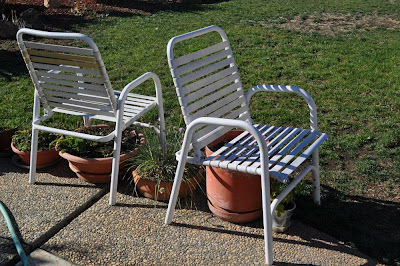 I made sure to cover the lettuce and bok choi. Only because they seem to me to be fragile, and therefore frost would make a difference – to be honest, I’m just guessing at this stage. 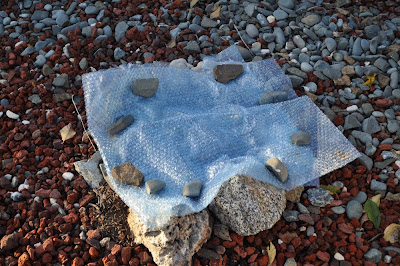 And so I went to bed content that I had done the best I could for my little garden.

Why is frost and low temperatures so damaging  to some plants?

Well, when water freezes it swells, so if a plant freezes the water within the cells expands, bursting the cell walls.  That is why when the plants thaw out, they just flop over.

The night before last the temperature dropped to 28F.  The zucchini wasn’t covered and it bit the dust. 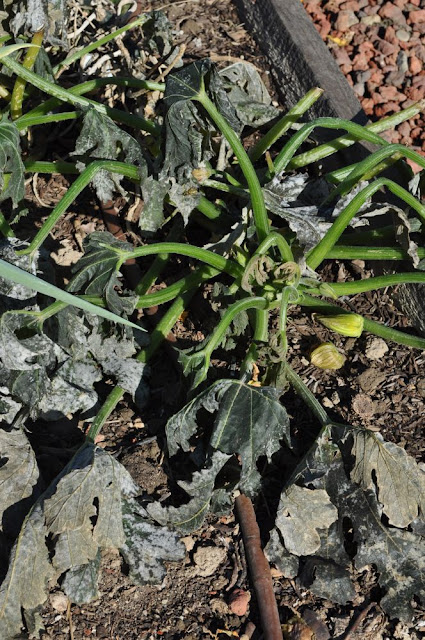 Where the basil was peeking out from under the bubble wrap, it got damaged, (right hand side of photo) but those leaves under bubble wrap seemed okay. 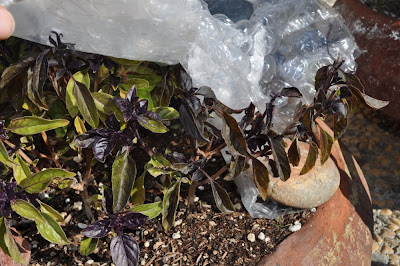 The cilantro was very happy snuggled under its covers. 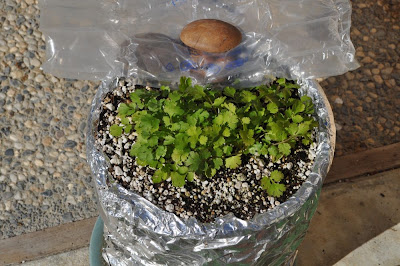 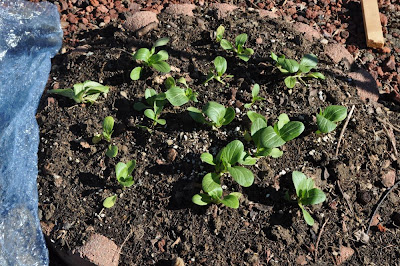 On close inspection the spuds were slightly damaged – you can see where the leaves have turned a darker brownish color. 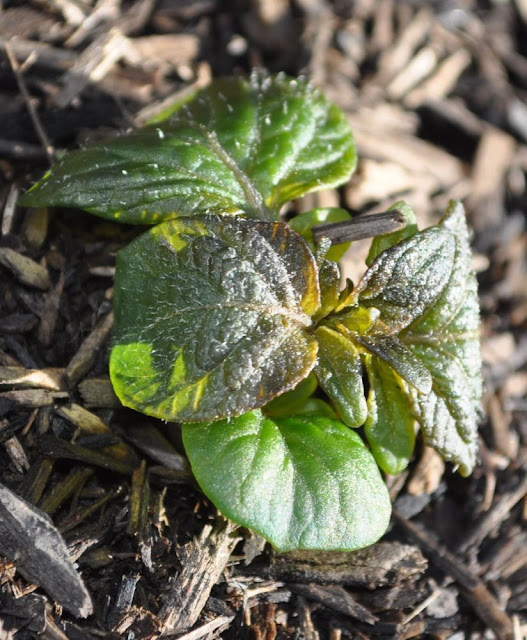 The leaves beneath seem okay and so my plan is to just leave these alone and hope that they recover to some extent.  I’ve also read that some other plants might recover too, and its best not to prune off the frost damaged parts. 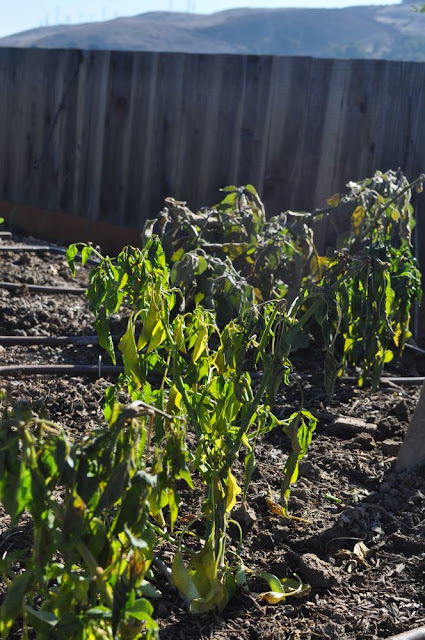 Despite being covered, the peppers and eggplant took a a hit – that’s how it goes, I suppose! I did however come across a website with great tips on frost protection (which you can read for yourself by clicking the link) that said to avoid covering with plastic – perhaps the bubble wrap was not as clever a plan as I had thought.

But the arugula was thriving. 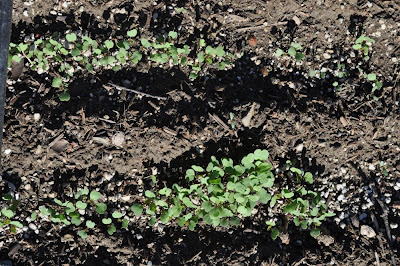 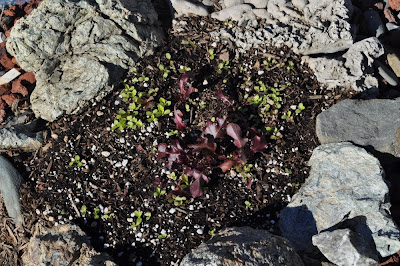 But wait a minute – I forgot to re-cover that patch of lettuce last night – so how did it survive the low of 29F?  After a garden fence clinic, (which usually occurs when I catch Al in his garden and quiz him on gardening matters over the fence) it transpires that, in fact, the lettuce is fairly frost resistant.  This was totally unexpected.  I turned to the internet for a second opinion and discovered that lettuce does survive a light frost. So, was all my nurturing in vain – those varieties that died were doomed – and covering those that were not susceptible, a waste of time?

Not necessarily – the BBC website suggests covering lettuce when a frost is likely. Admittedly, British frost and Californian frosts may drastically differ, but if it does get cold enough, damage will be done.

So, what makes a plant frost resistant? Apparently if a plant has a high content of salt in its cells, it is more frost resistant. This makes sense as adding salt to water lowers its freezing point. That why it is used on roads in the winter – not just to make them taste better for crazy people who may want to lick the road!

One thing I love about researching a question is that I tend to pick up lots of other useful titbits along the way.  From the same website I read,

I’m going to try this with my arugula.

As for my kale forest – yummy – frost should sweeten the leaves!  A silver lining in every cloud.

7 replies to Frost and foremost