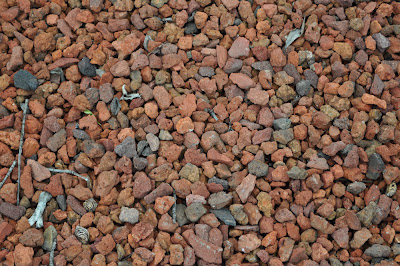 I inherited about five tons of red lava rock.  It’s everywhere around our back yard.  It works great between the raised beds, but when I tried to remove some to make the bulb garden I found a thick layer of black plastic beneath it.  Great for keeping the weeds down this past 25 years, but now the leaf litter and humus has accumulated above the plastic and between the rocks, and the weeds love, love, love it. The area along the side of the house has been given the very grandiose name of “The Orchard”.  It does have more than ten trees, even if all but four of them are between knee height and shoulder height.  The ground between all these trees is covered in – guess what – yep, a thick layer of plastic and 4 inch deep, red lava rock.  The problem (apart from weeds growing there despite the hostile environment) is that the roots of the trees will find it hard to get water and oxygen. Soil nutrients and minerals won’t seep through plastic, and worms and beneficial bacteria can’t survive under the plastic either.  All in all, the plastic has got to go!
Getting rid of the plastic is fairly easy.  It’s brittle and breaks easily, but I can kind of roll the stones off it. Sadly, past recycling, it goes in the black bin. But what do I do with the tons of stones left behind?
I put an ad in Craigslist for “Free Red Lava Rock,” telling folk that they had to come get it, load it themselves and that they could take as much as they liked.  The first week, I got a bunch of emails and dealt with them in order that they emailed, letting one person come. Then if there was any left I’d go on to the next person. That was my first mistake!
The first girl (a really nice girl – we chatted for ages about gardens) only took about three bucketfuls!  She hardly made a dent in it, but by that stage it was halfway through Saturday and the rest of the “interested parties” had decided to get on with their weekend. No-one else showed up!  One other guy did come during the week but again he only took a minuscule amount. It still looked as though no-one had touched it. 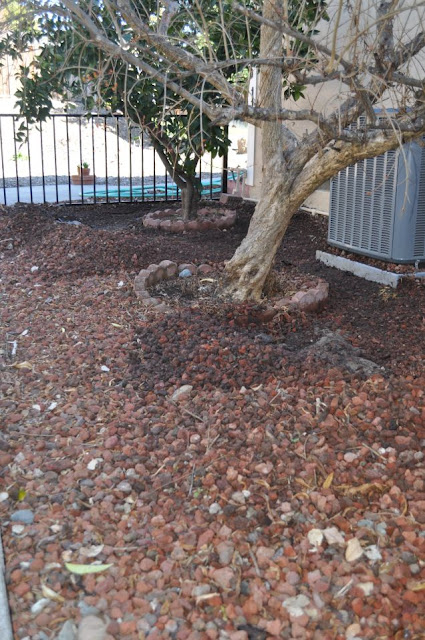 The following weekend I decided no more Mrs Nice-Guy. I posted another add that basically said the same, except to mention that it was first come first served on Saturday between 10 am and 3 pm, and to call or text me for the address.  About twenty minutes after posting the ad a guy called. He seemed very excited about the amount of rock I had and proceeded to tell me in great detail (during a critical part of CSI, I might add!) how he planned to come collect ALL of it the next morning at 10am.  I was thrilled and nicely replied to the next five texts saying, “Sorry all gone.” – so much for ditching Mrs Nice-Guy, seems like she was butting in where she wasn’t wanted!
Next morning, at 10 am no sign of Yer Man.  At 10.30 I rang him and asked him if he was still coming.
“Oh yes,” said he. “I’m just running a bit behind.  I’ve to go collect the liner for the truck then swing by and pick up blah blah blah blah.” And so on.
“Okay,” I said interrupting him. “See you soon.”  And still I dreamed of a lovely clean yard, free from red lava rock.  I imagined myself ringing the tree company and asking them for more mulch, and pictured a steaming heap of wood chips in my driveway for the next two weeks.  This time I’d hire help…
At 12.20pm still no sign of Yer Man.  I rang his number, but no answer.  How could someone be so inconsiderate?  Maybe he’d had a terrible car accident or something.  My husband and Al, my neighbor, both gently pointed out that that’s what people do. Incredulous, I left Yer Man a message telling him I was answering the other texts and letting others have the stones.  I didn’t want everyone turning up for the stones and fighting over them (as if!) and my other neighbor Ray said that if that happened could I ring him so he could come over and watch – At least I kept the neighborhood entertained!
Of course none of the other previously-interested parties even replied.  Back to the drawing board, or rather, the ad in Craigslist to be precise.
I kept it basically the same but changed the collection window to Sunday 10 am -12 noon.  A very nice man came and again took an amount of stones, more than the others but still not enough. He was a bit of a bird watcher and identified the nest in the orange tree from last weeks post as that of a bushtit. (This concurs with a comment left last week by Lisa and Rob.) The nice man taking the rocks said that the female bushtit has pale cream eyes and the male has brown eyes.
At 12.15 my phone rang. It was Yer Man!  He apologized for not turning up, saying that something had come up and that he should have rang. I mumbled something along the line of, “That’s okay – no harm done.” (I just hate Mrs Nice-Guy!) He asked me all the same questions he’d asked me two days before-hand, told me all the same details of what he’d to organize, and he said he’d be there in an hour.  I postponed my soak in the tub (after a morning raking the damn stones).
Two hours later, yes, two hours, Yer Man called again. He asked me what our address was.  He told me (again) he had the truck, the liner, the helper and just needed to goggle-map the address and he’d be all set. What was with this guy? Did he just need someone to talk too?
When it got dark, three hours and three batches of cookies (baked, not eaten – I wasn’t feeling that bad!) later, I went for my soak.  He still had not shown up and I, hardly able to believe that people can be such eejits, (I’m talking about him not me, though I probably qualify too) retrieved his number from the call register of my phone and got my revenge by saving it as a very nasty name. Really – a very very nasty name – too nasty to print here. If he calls back I won’t be answering – ha – that will show him… though, I really hope he hasn’t had an accident on the way over or something!
So, that said, em… does anyone want some free red lava rock? I’ve still got plenty!
Byddi Lee
Filed Under : Uncategorized

16 replies to Get the rock out of here!