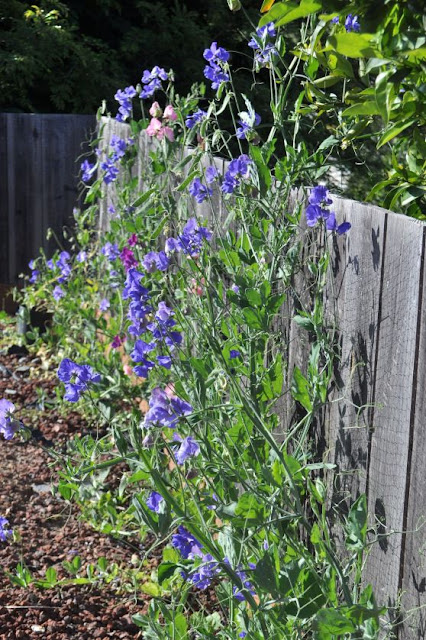 What’s not to love about sweetpea? They have beautiful flowers in a variety of colors. They can be free standing (bush-type), though many are climbers, but as annuals they never get invasive or heavy enough to overwhelm a structure, and their flowers smell devine.  This year, I have figured out that in California the seeds must be planted in the autumn and not, as many seed packets, suggest early spring.  The ones above were planted in October.  The ones below were planted in February! This year I’m planting all my sweetpea in September. 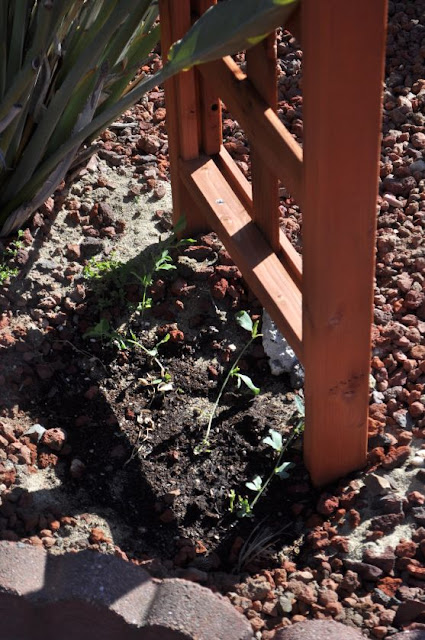 And peas (for eating) don’t fair much better when planted in February – it simply gets too hot too quickly here. 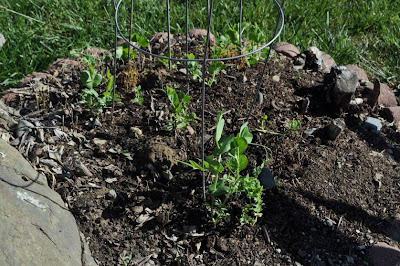 Yet, the lettuce have been thriving this year. I have a forest of them in the raised beds, and I have some in pots at the backdoor as ornamentals! On Easter Sunday, I provided a mixed leaf salad for 14 dinner guests, had a pile left over and still there was not even a dent in the garden from where I’d harvested them. 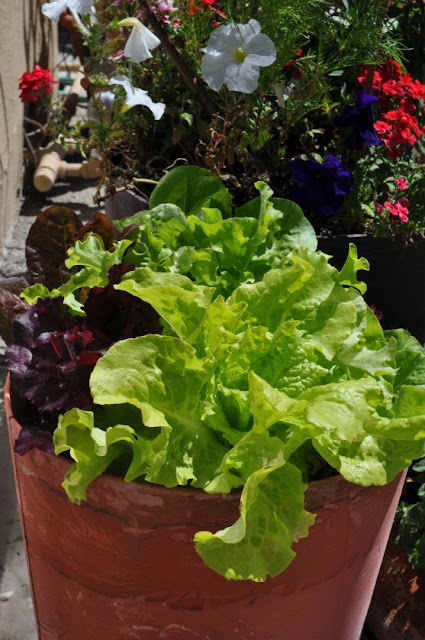 There have been many garden related surprises this week.  I won a prize in the Sustainable Living competition over at the Thanks for Today blog. Thanks to Jan for running the competition. I am very excited because I never seem to win anything – much appreciated!

Another fabulous surprise this week was the appearance of the Milkweed shoot in the native garden. I’d almost given up hope that this root would grow but on Easter Morning (appropriately enough!) it poked its shoots out of the soil and is still going strong. As I was out in the garden taking that photo (in my pjs) the garden was full of joyous birdsong. It was as if all of creation knew it was Easter Sunday! 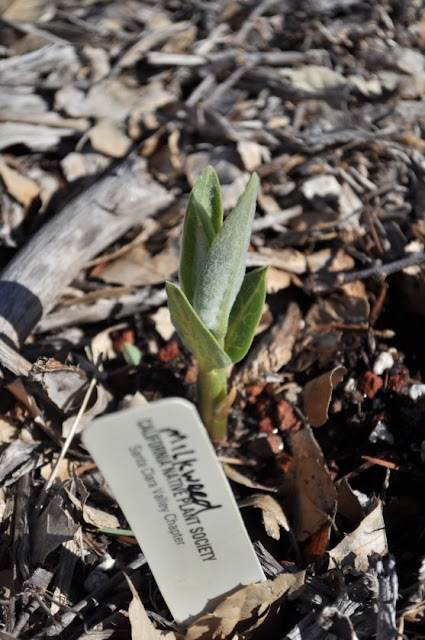 Then another plant that I had given up on poked its shoots through the soil too – asparagus!  It will be a couple of years before I can harvest this, but I really had thought that the crowns I’d planted had simply died. 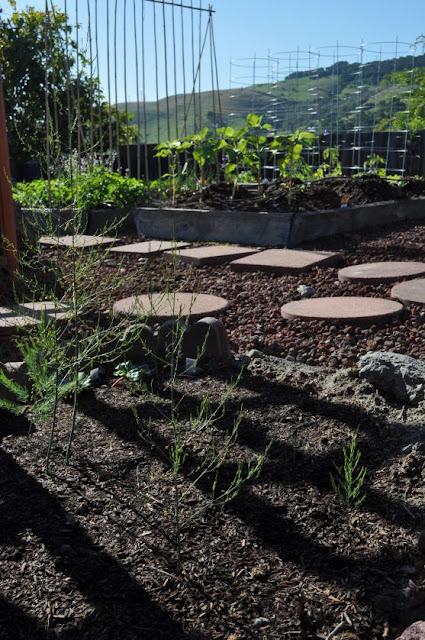 I have  beautiful show of the native plant chinese houses, and I was interested to see a color variation in the midst of the the purple and white flowers, one of the plants has completely white blossom! 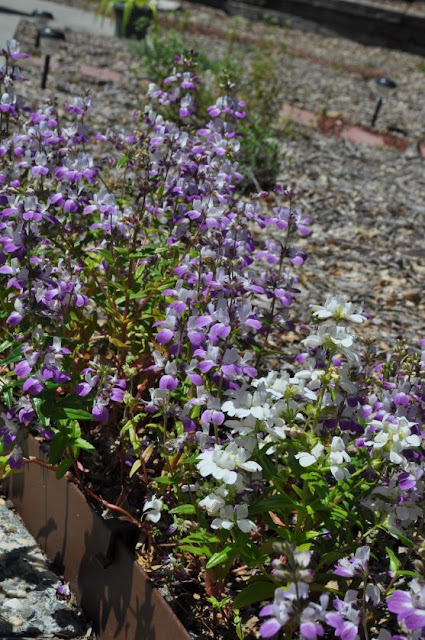 I had read somewhere that bush anemone was great for brightening up a shady corner of the garden. Well, I have not been disappointed… 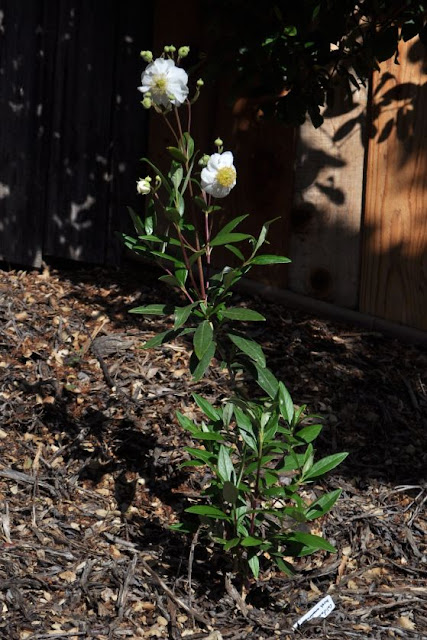 One of the best parts of the Master Gardeners program is the tremendous people you meet in the organization.  One day while re-potting tomatoes at their research ranch, Nine Palms, I got chatting to the wonderful Nella.  I happened to mentioned that I was in the process of putting in a succulent garden in the strip of land between my driveway and Karla and Al’s yard.  She invited me to come see her succulent garden (read vast, fabulous collection) and that she would give me some “pups” to help me along.

She followed up the verbal invite with an email and detailed directions to her house – many people issue invites but never follow it up. I was mega-impressed.

Well, she lives way up in the hills with a spectacular view of Santa Clara Valley.  Nella’s generosity, the over-cast day and green fields made me feel right at home – I could have been visiting any number of relatives in Ireland. Nella keeps bee’s and chickens and had recently rescued three adorable kittens, which she kept in a pen with three equally adorable baby bunny rabbits. I thought I’d died and gone to heaven!

She sent me home with three boxes of succulents which have filled out that patch of land (with the help of my red lava stones!) beautifully. 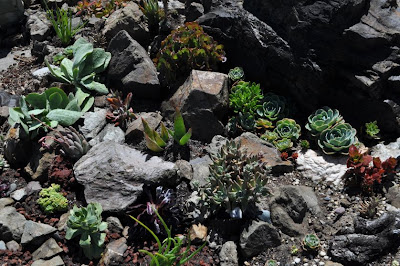 She even gave me some quite mature/large succulents.  And as if that wasn’t enough, she arrived in to Initial Training with three variegated succulents that she had forgotten to give me on Monday.  Thank you so much Nella. Every time I look at my succulent garden I will be reminded of your generosity and of the generosity of spirit that exists within the gardening community, especially Master Gardeners. 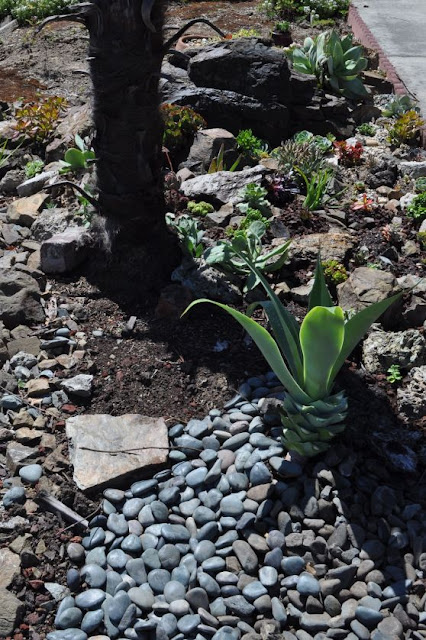 Then another surprise – Al came out to admire my work and informed me that my property stretched over another 2-3 feet – I’d assumed the decorative rocks on the left to be Al’s property.  I was another 14 square feet richer.  Al did point out that the weeds there were also belonged to me!

But alas, I have to leave you on a less uplifting note. I found the bush tit nest slashed open. Inside was empty, bar the soft downy feathers the parents had lined this cozy wee nest with. 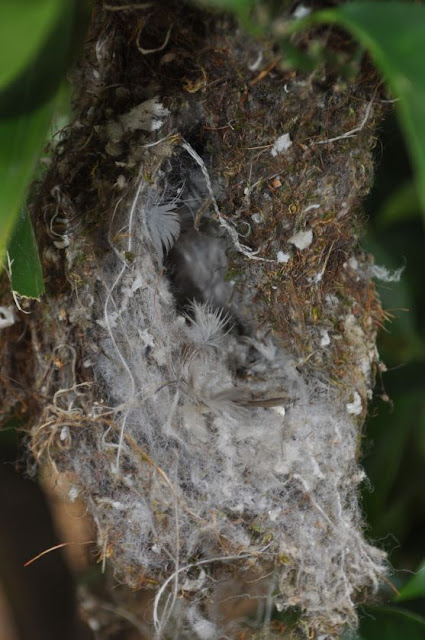 I am so hoping that someone will leave me a comment that says something like “So that’s okay – when the young are old enough they just burst right thought the walls of that little ‘ole nest!”
It was on the ground yesterday, and I saw a cat in the garden.  I’m thinking cat, crow or even squirrels could be the culprits – unless the baby birds really did pull an Incredible Hulk style escape.
I suppose not all surprises can be good, and I’ve done well this week, but after we lost the baby bird last year I fear that I may never have the pleasure of watching little fledglings leave the nest healthy and happy.