Next time you find a creepy-crawly in your garden that you’ve never seen before, think twice before reaching for the bug spray – in fact, try to never reach for bug spray at all. Integrated Pest Management (IPM) only uses chemicals as a last resort and uses those that are kindest to the environment first.

Only 3% of insects found in the garden are actually harmful to the garden. And the best news is that other bugs may actually kill those bad bugs for you. So why would anyone spend money on chemicals and go to the bother of spraying if they can have the job done by someone else for free and with no upset to the food chain? In fact, it strengthens the food chain and hence ups the wildlife fun in your garden.

The kingpin of IPM is to invite beneficial insects into your garden and the best way to do that is to do nothing! A frustrating approach when you are faced with a lemon tree full of soft brown scale and all you want to do is blast the blighters to kingdom come. 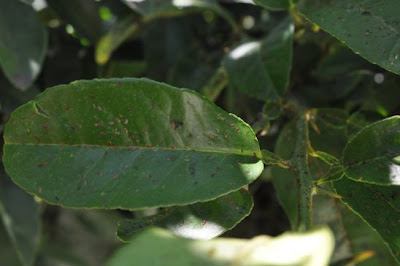 The tree also was heavily infested with all kinds of aphids – though I’d never seen woolly aphids in the flesh before. 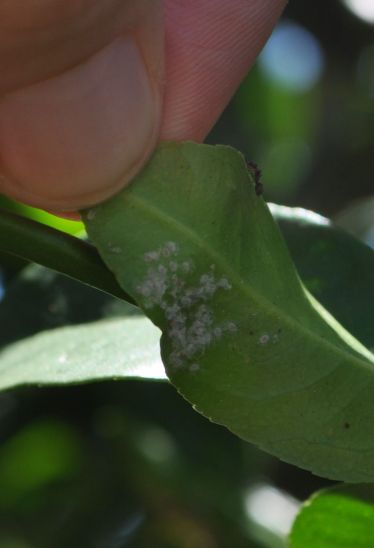 Black sooty residue or sooty mold covered the leaves. The aphids and the scale produce honeydew – sticky sugary droplets upon which the black mold grows. Its presence is a sure sign you have an infestation. 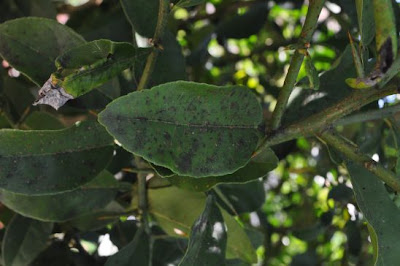 This honey dew is highly prized by ants and they “farm” the aphids and scale to get it. They protect the pest insects from their natural predators, so that even if you have ladybugs (ladybirds in Ireland – but they do look more like bugs than birds, so I’m siding with the Americans on this one!) they can’t get at their prey because of the ants. 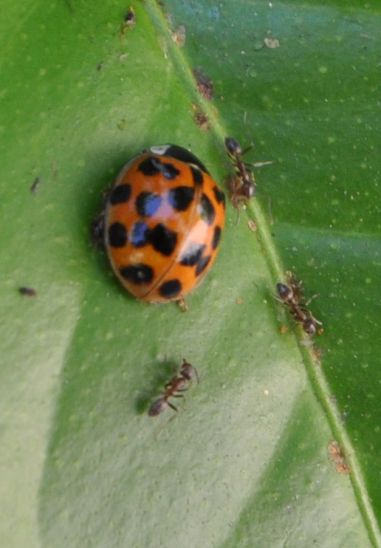 The first step is to control the ant population. We took a two-pronged approach, laying down baits to kill the colony (there are so many ants on our hill I wasn’t too worried about wiping out this layer of the food web – it’s simply impossible) and preventing access up the tree by using tangle foot. 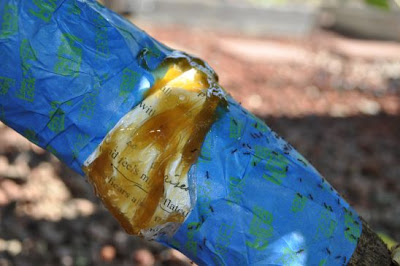 We strapped a piece of paper over the bark to prevent contact between the goop and the tree. In the photo above you can see that the ants are pretty stymied by the tangle foot – or perhaps repelled by a draft of some of my writing (beneath the goop) – who knows?

And very soon it became apparent who was winning the war as the ladybugs moved in for a feast. 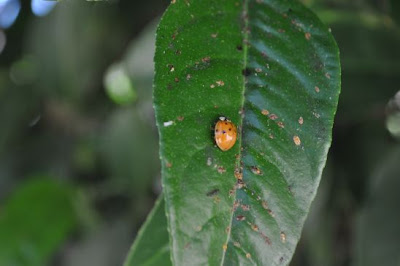 But then we spotted two new(to us) beasties. One looked like a brown ladybug. A drab creature – very much the Melanie Wilkes* of the ladybug world. If it even was a ladybug. But I followed IPM protocol and did nothing. 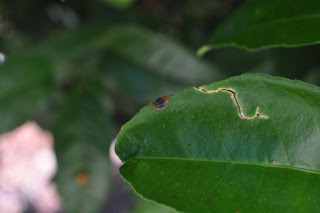 Then, a few days later, I spotted this creature. It ambled purposefully around the leaves and though it did look alarming, I thought it rather cute in a “West-highland Terrier” kind of way. 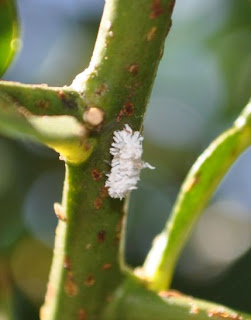 I had to find out what these two creature were so I posted their photos to the Master Gardeners yahoo group and within minutes had some possible answers. One of the first suggestions was that the white one may be a mealybug but my picture looked slightly different. I was given great advice – check out the UC Davis IPM website. Now, why hadn’t I thought of that?

With my curiosity now tweaked, I decided to find out what the Melanie Wilkes Ladybug really was. I was delighted to discover that it was a Mealybug Destroyer! Then I got another email from a Master Gardener to say, “Check out the mealybug destroyer’s larva picture .” My photo of what I thought was a mealy bug, is actually a mealybug destroyer’s larva, and these guys are even more voracious than the parents.

Good job I went with the IPM idea (do nothing), or I’d have been out there committing mealybug destroyer infanticide!

* Reference from Gone With the Wind – Melanie Wilkes was the drab wife of Ashley Wilkes, the man Scarlet O Hara was madly and somewhat secretly in love with.

9 replies to 97% of insects do not harm the garden