Last week we had a couple of dull days and the promise of rain. The ideal time for me to transplant my hardened off tomatoes and peppers into their new bed. I like to transplant before a rain-shower, when possible, to give my babies a chance to get really soaked in.

The day was so dull that even the poppies where having a duvet day and not even bothering to unfurl. 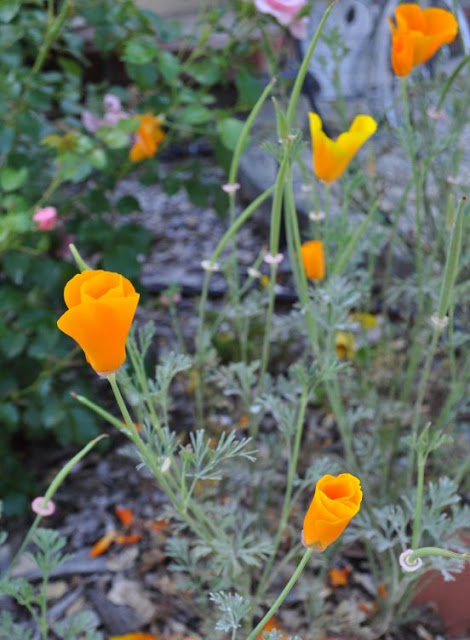 I had approached my bed building in a very lazy manner – I simply threw horse manure over the mulch that was there. I maybe should have dug it through the soil beneath, because I had forgotten how deep I plant the tomatoes. I hope they will be able to root in the deeper more solid packed soil. The top 4-6 inches is still loose enough and should be fine…. I hope! 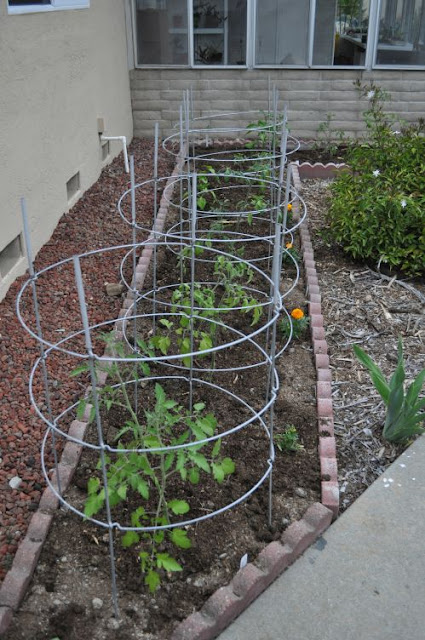 I’m experimenting with straw bale gardening, basically because I had a bale of straw left over from the crib at Christmas. It is essential to use straw as hay has seeds in it, and straw is cheaper anyway. Also you have to leave the straw to weather. Mine has been sitting outside since December, so it is starting to compost in the middle. I will add some fish emulsion too to “lace” it with nitrogen.

I had planned to made a little trough in the top of the bale and fill it with soil and then plant some seedlings but it was really hard cutting through the straw. I even resorted to using a saw, but it was still slow work. 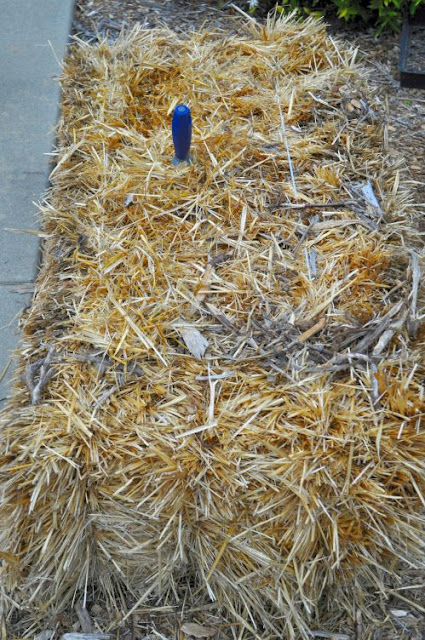 Eventually I made a 4′ hole – big enough for a tomato seedling. The straw that came from a hole expanded to nearly fill a bucket! 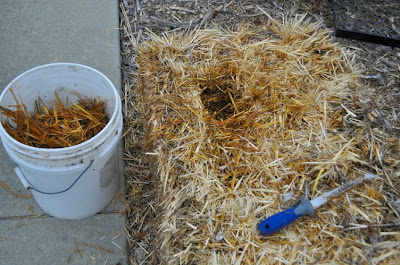 I planted two tomato seedlings in the bale -one at each end. I may even add a winter squash, something that vines, later. 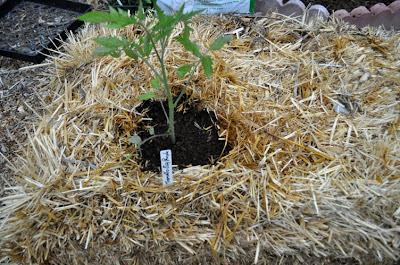 As soon as I’d finished it rained for the rest of the evening.
In the days that followed the sun came back out and the garden celebrated with a joyous riot of blossom. The poppies opened up and I caught this bumble bee practically rolling in the anthers! 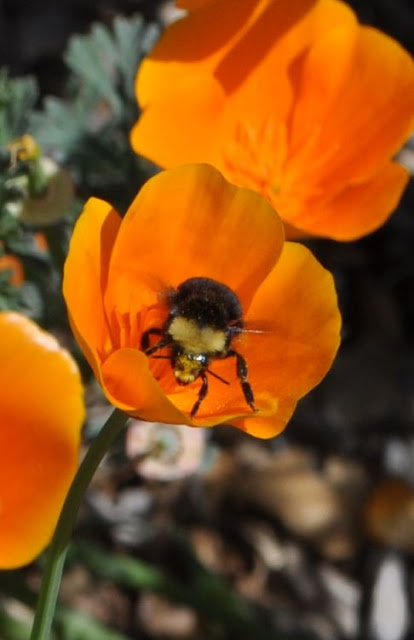 The monkeyflower bush amped up it’s profusion of blossom to near gaudy extremes. 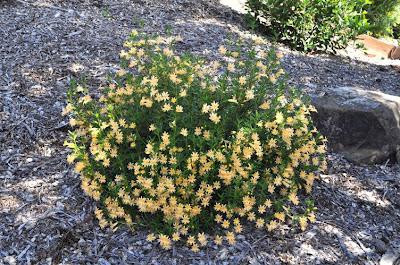 The Chinese houses are blooming lovely! 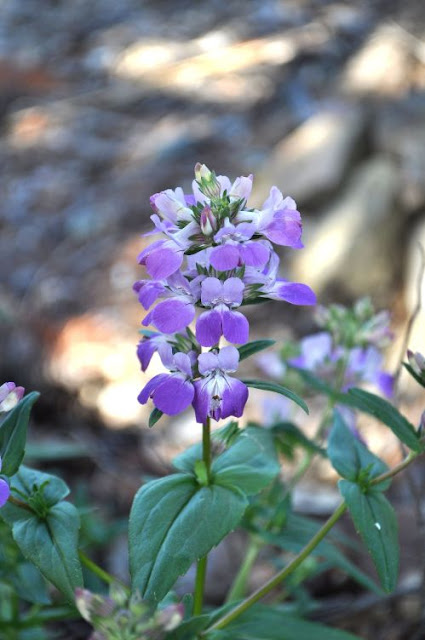 I’m particularly proud of the foxgloves that I grew from dust-like seeds. They were the first seeds I’d sown that needed sunlight for germination. 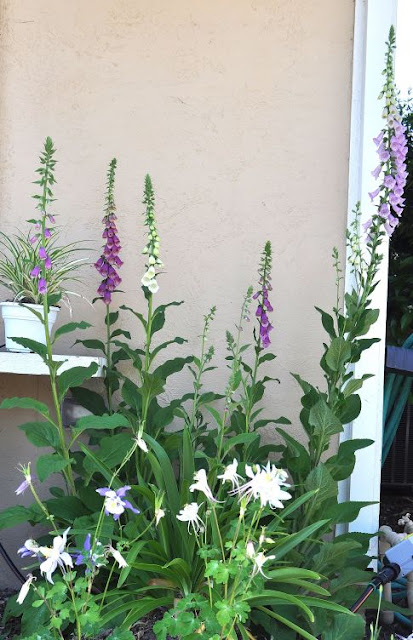 I have a particular fondness for bell shaped flowers, and foxgloves are a reminder of home. I have them planted in the shady, part of my garden that receives regular water, right along the front of the house to give it that cottage garden look. 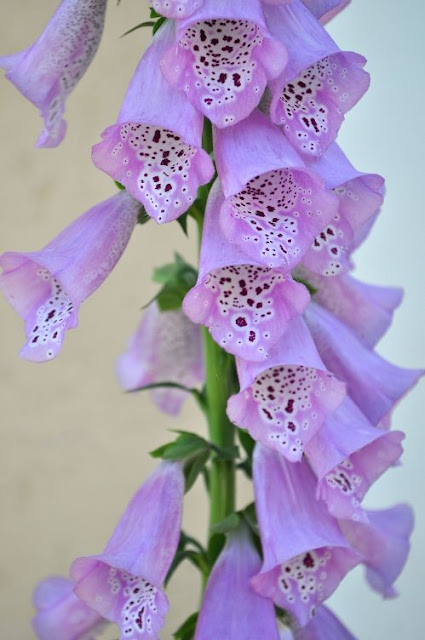 Everywhere I look, the garden is bursting out in blossom. In the foreground are irises and the color is repeated in the sweet-pea patch against the back fence. 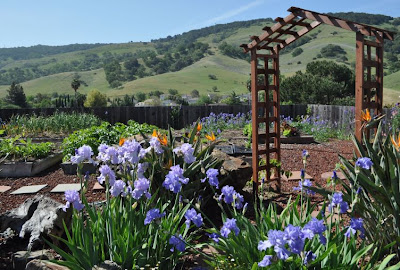 Some of the irises have come up pink and purple. I love this combination. 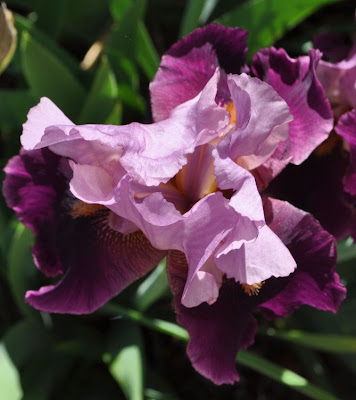 And in a forgotten corner a broken pot, left for dead, has sprung back to life. It seems there is no such thing as an annual when the weather is a lovely as it is here! 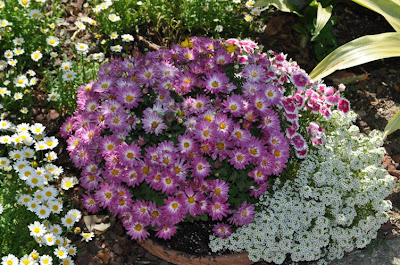 Just when I thought that my garden was at it’s most beautiful in April, May is promising big things!