The lawn is dead – or perhaps not – we’ll know for certain after the rains come, but it sure looks deader than a dead thing, and I’m fairly confident that we’ve blasted most of those weeds seeds. So now it’s time to landscape the area.

I put out a call to some of my girl friends. We’d been discussing how we’d like to try a spot of “Barn Raising.” None of us needed a barn but the principle was the same. We’d get a group of us together to work on a project. Then that project host would owe back the time in labor to the various projects of the participants. So I suppose it is more of a labor exchange than a barn raising, but whatever it was, it worked.

On the day before my buddies arrived to help dig the dry creek I’d wanted to build, I laid down an outline of where I wanted to dig and hosed the area down with water so the soil was saturated and easy to dig the next day. 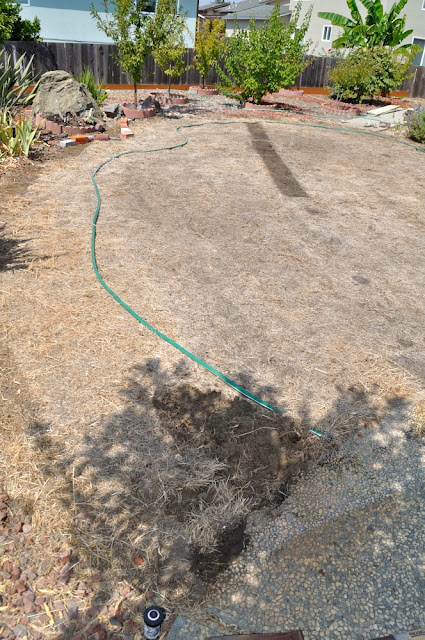 My friend Christal wisely suggested that I should have the wide-end closest to where we did most of our sitting around, and thus cash in on the perspective, so that the far-away side would look thinner and farther from us.

I’d read online that a dry creek needs to be half as wide as it is deep. Mine would be 3 feet wide at it’s widest point, and therefore 18 inches deep. In hindsight, since my creek is only for decoration, and I do not anticipate it filling up with water, I could have gotten away with it being less deep but specs were specs and that was how it had to be. 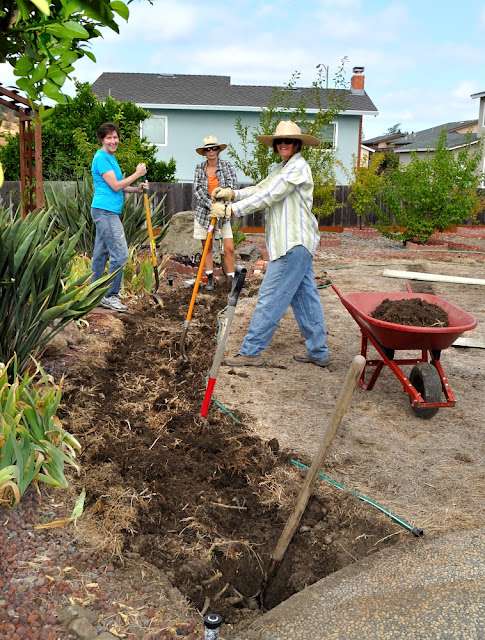 Within three hours of girl power, my friends Cathy, Eva and Christal (from left to right in photo) had it dug! I helped too, but as project host, it seemed that I ended up with all the fiddly wee jobs, like putting air in the wheels of the wheelbarrows, (Okay – wheeling the them over to Al’s house and asking him to put the air in them) providing water and snacks, and managing where the soil would be dumped – soil seems to expand fourfold when dug up and I used the soil to make a new bed along the back fence… 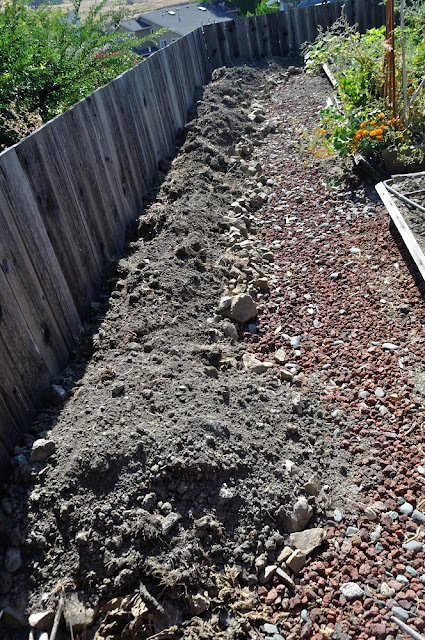 and halfway along the side fence too. 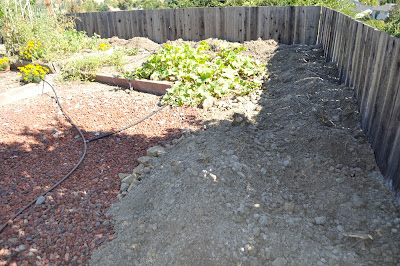 And I was left with a trough in the ground to fill with river rock. 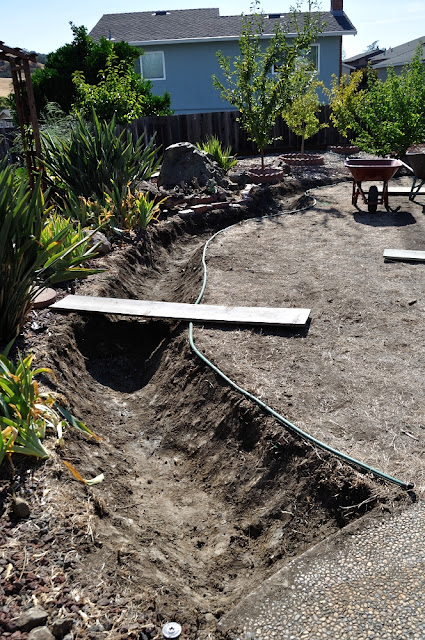 The solarization of the soil only goes down to six inches or so. The bed was three times as deep in its deepest part, so I decided to put down some cardboard to block weeds. 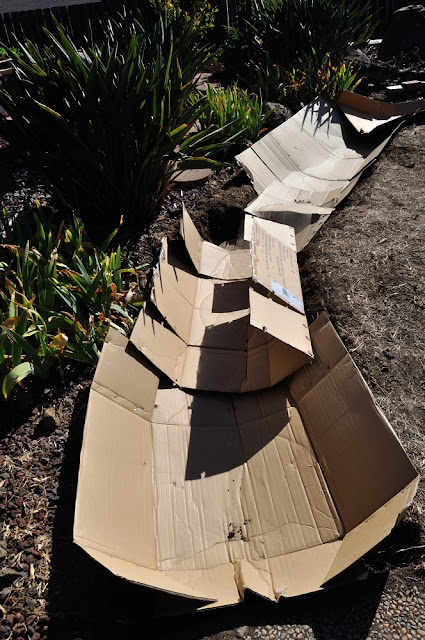 But then I discovered a huge bale of plastic in the shed. I hadn’t bought it. It was not saving the planet by not being used and getting wasted sitting my shed. After a lot of soul searching, I decided to use it to prevent the rocks from sinking into the soil after the cardboard had broken down. It was a heavy grade plastic and would most likely still be there a century from now. But it was only a little wee patch of ground really and…See? I’m still trying to convince myself I did the right thing! Put it this way – I wouldn’t have gone out and bought the black plastic…I probably don’t need it…but… 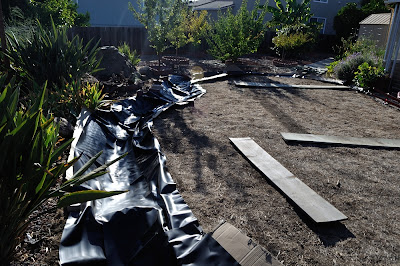 My next-door-neighbor Al took me to the rock shop to buy the rocks that afternoon. They were delivered the next day…the day that I was sore from digging and the last thing I needed was to shovel rocks! 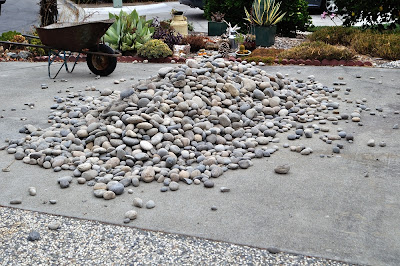 The pile seemed small and I panicked in case I would run out. This is what $250 of rocks looks like (delivery $65 and taxes included.)

Al (my hero) came over and helped me shovel them into the wheel barrows and dump them in the creek. After two hours the pile had gone.

My back yard neighbor had piles of larger rocks he didn’t want and I texted him and asked if  I could use some of these as accent stones and he told me to help myself. My friend Lucy came over and helped me position these heavier ones.

With the help of my friends, I’d built an Dry Creek in 48 hours! 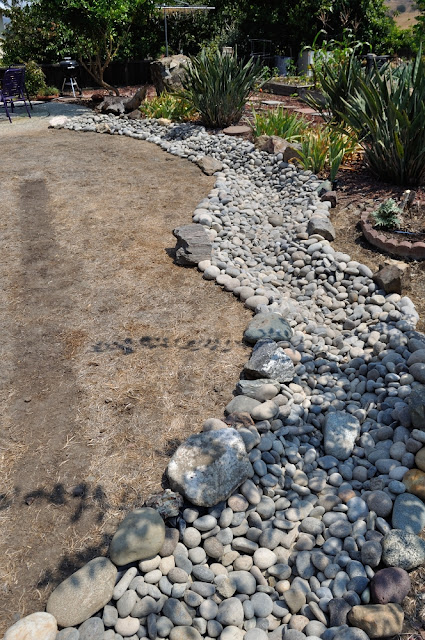 I was plum tuckered! 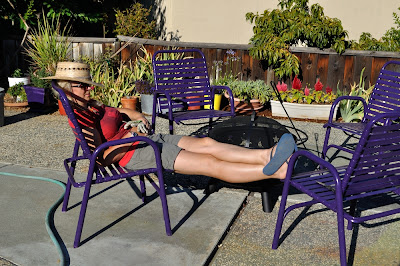 The following week I added the finishing touches. I ordered a couple of bridges online and painted one red – well if it’s good enough for the Golden Gate Bridge… 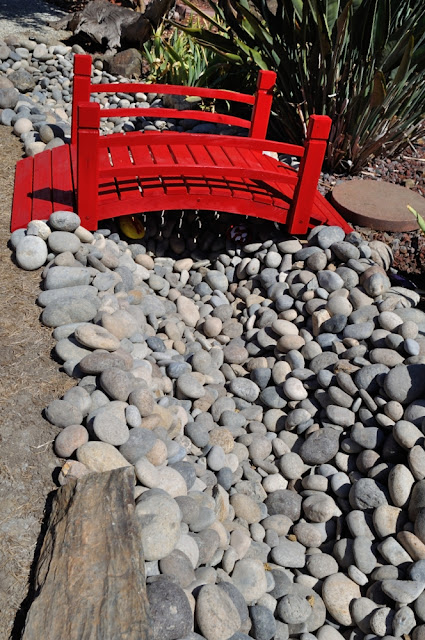 It’s plainer, sturdier sister, I just varnished so as to appreciate the beauty of the wood grain. 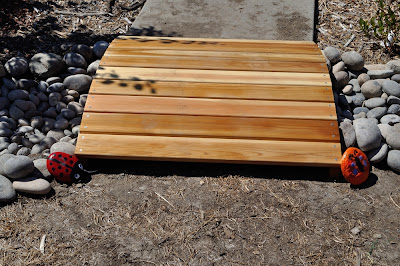 I invited a few of my friends’ children to come by and paint trolls, ladybugs, flowers and butterflies on rocks just to  involve the little people in my life. The trolls sit under the bridges and watch for billy goats! Billy goats can really do some damage in a garden you know. 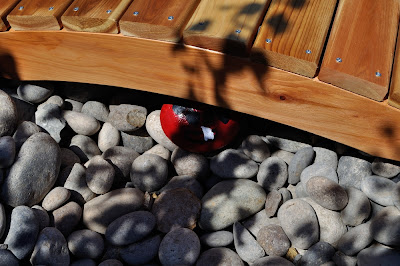 And if you look closely you will even see some gold and silver nuggets in that thar crick bed! What wonderful things we can do with Rusto-leum metallic paints. I was really tempted to paint Al’s wheelbarrow gold before I returned it to him and thus award him the coveted gardeners “Golden Wheelbarrow” award but thought better of it – I may need to ask him for it again – but knowing Al he’d have forgiven me for girly-fying his wheelbarrow by then!

The finished product was really something to be proud of. 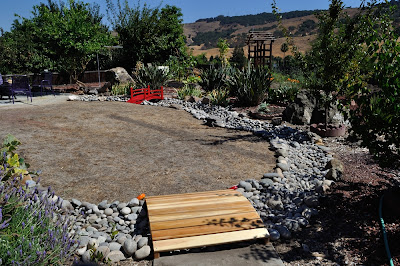 And so I made a silver plaque to remember everyone who helped me make this happen. 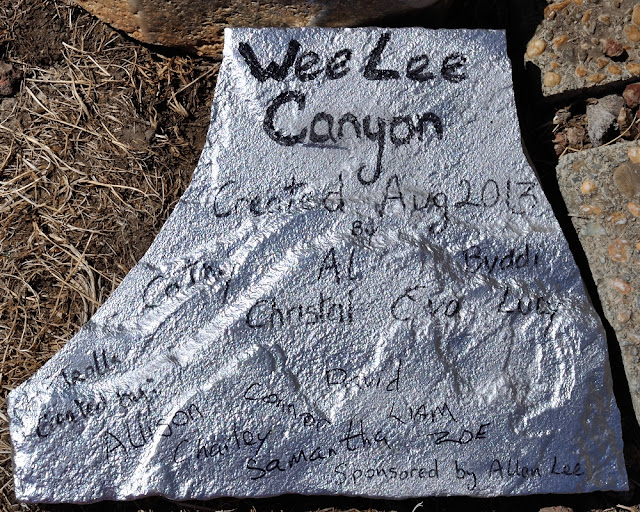 Thanks again you guys!

P.S. I used a similar method to build a wildlife pond in my garden in Ireland – check it out here.

3 replies to The creation of Wee Lee Canyon