It’s been a crazy couple of months on the writing front. My book March to November, is getting published this month and I think I’ve turned into the author equivalent of “Bride-zilla”! Would that be “book-zilla” perhaps?

For example, I had an idea for the book cover that involved red bricks. In order to get my idea across to the designer I needed to find a red brick wall similar to the type you find in Belfast, where the story is set. But where to find a red brick wall in this land of stucco and strip malls? My Husband spotted an area in downtown San Jose, so off I went with my camera.

I found a great sample with the perfect color, texure and deterioation just off St James square. A sad sign of the times, this is a regular hang out for what appears to be homeless folk. So there I was minding my own business and taking photos of a brick wall when I heard a voice behind me say, “Miss, would you like us to take a picture of you?”

I turned to see crusty looking old guy wearing a black hoody faded to nearly the same color of grey as his shaggy beard and a pair of really baggy jeans whose hems had seen better days. I’d seen him earlier talking animatedly with himself (no blue tooth or head phones) or maybe he’d just been conversing with the rest of the “us” he’d mentioned.

I thought, “Bless him,” but smiled and said as warmly as I could, “Ah thanks but no. I’m good here.”

He cocked his head to one side and made a twirling motion with his finger at his temple, then muttered, “Whatever,” and ambled off.

Anyways, I got the shot I needed and have been working hard on the finishing touches my book needs before publication such that, as Labor day approached My Husband and I decided to take a break and go somewhere nice.

We’d been interested in going to Lassen Volcanic Park for a while now, but it always looked so far on the map that we knew we needed a long weekend. Even so we decided that if we went as far as Redding the accommodation would be cheaper, the Friday night drive shorter and we could scout out Lassen one day and perhaps Shasta the next – nothing taxing – just nice a Sunday afternoon driving type vacation…

Until we got to Lassen and learned that Lassen Peak trail was open and it was only open for a few days of the year. We knew we had to do it and were glad that we had packed the hiking boots…

And really, the trail was only 2.5 miles, a total of 5 miles. At our usual hiking speed, sure we’d knock that sucker out in less than two hours, easy. Except we were starting at an elevation of 8000 feet going to over 10, 500…but sure who needs oxygen when they’re hiking? And gradient smadient, right? So maybe tack on another half hour for that….

Oh you guessed it… four hours and many aching muscles later we arrived back at the car, exhausted.

It made me realize that climbing a mountain is like writing a book.

You start out eager, excited and full of optimism. 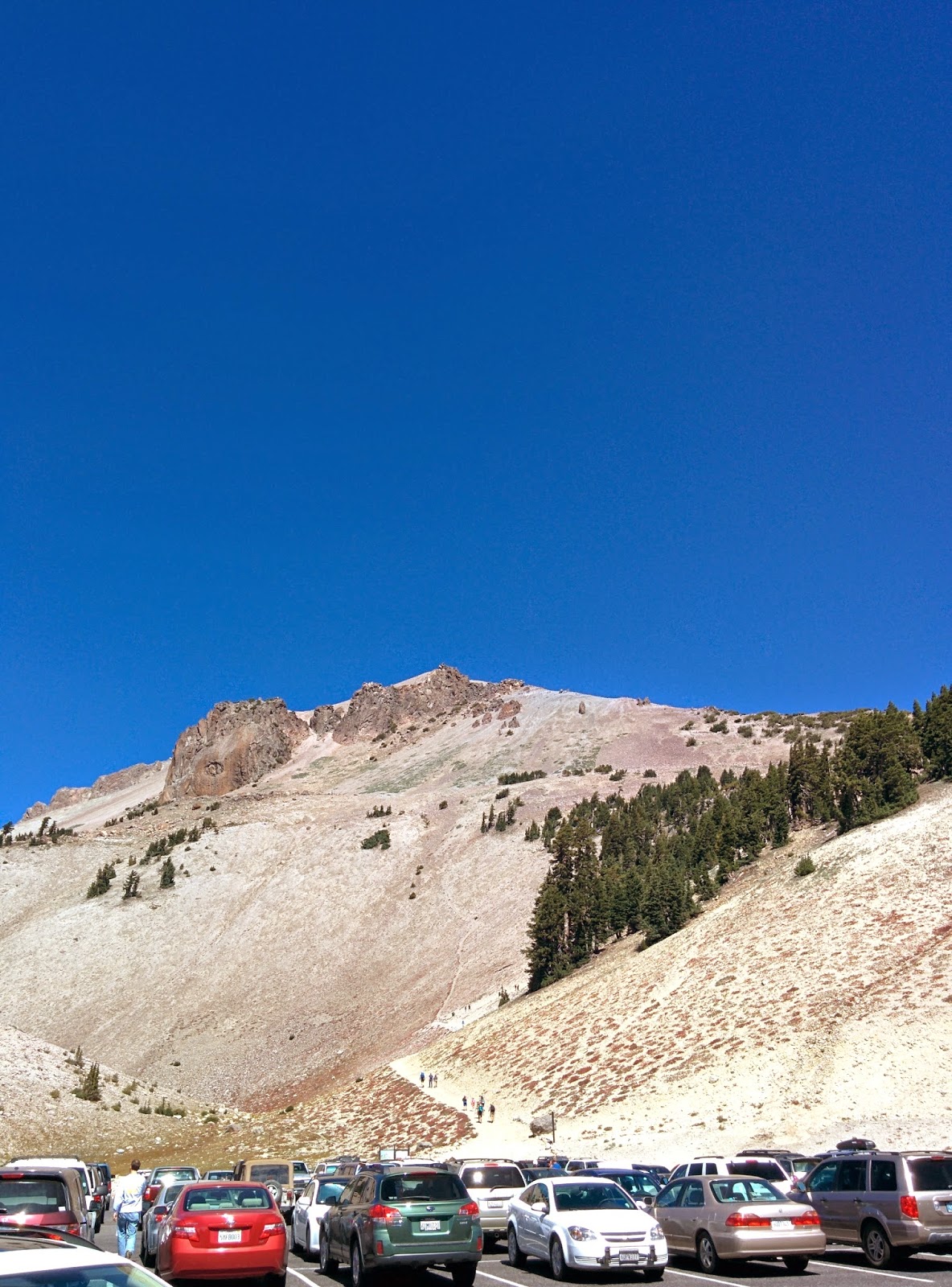 The trail doesn’t look that steep from the parking lot.

So you set a pace and continue up-hill, just like in writing where you throw out those first few chapters, thinking to yourself, “This isn’t so bad.”  Until you present your work to your fellow writers for critiquing and then the trail starts to steepen. 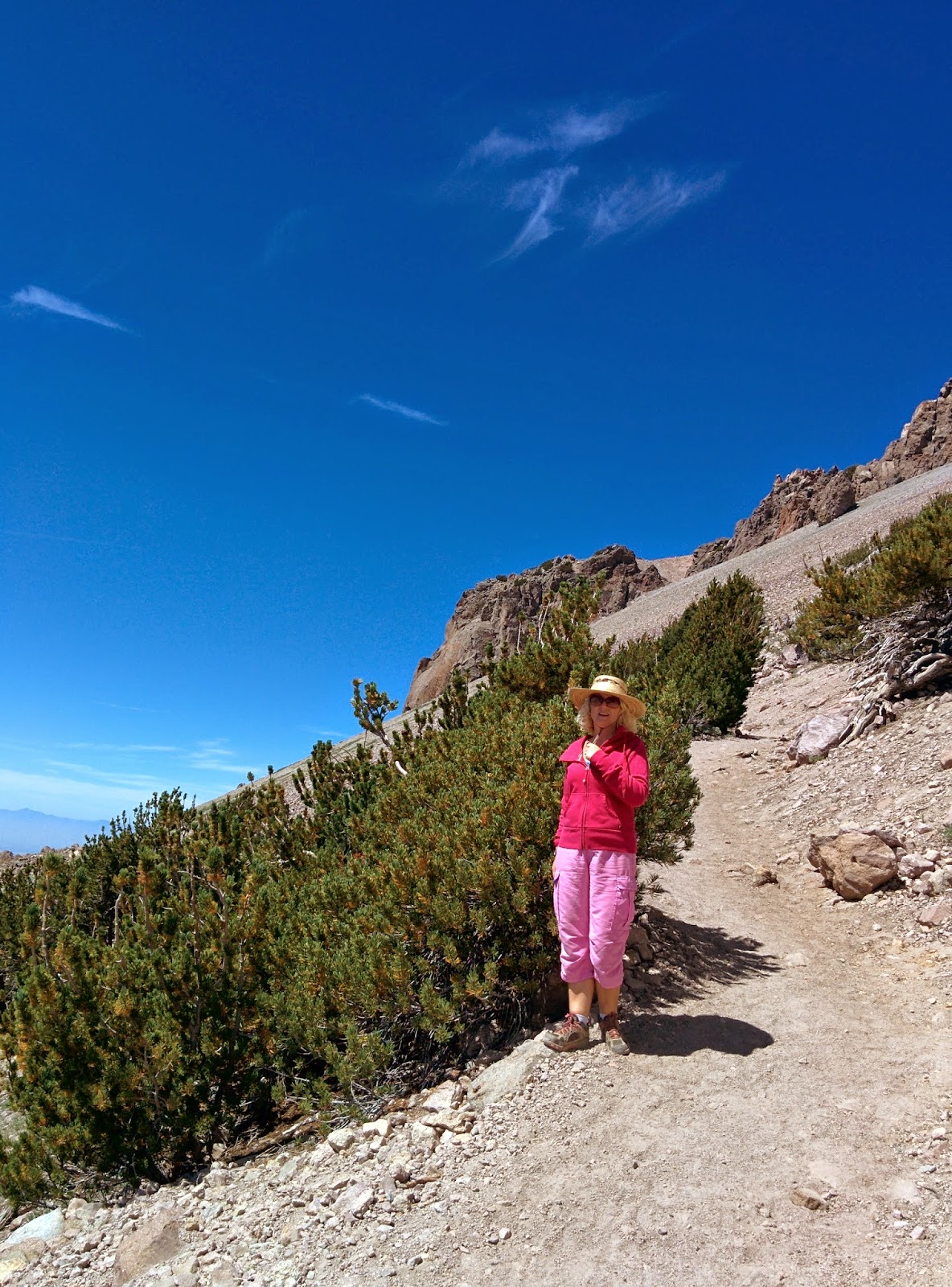 In fact every rewrite feels like these darn switch-backs – repetitive, far too many of them and going no-where fast.

But whats the alternative? Give up and slide back down the hill? 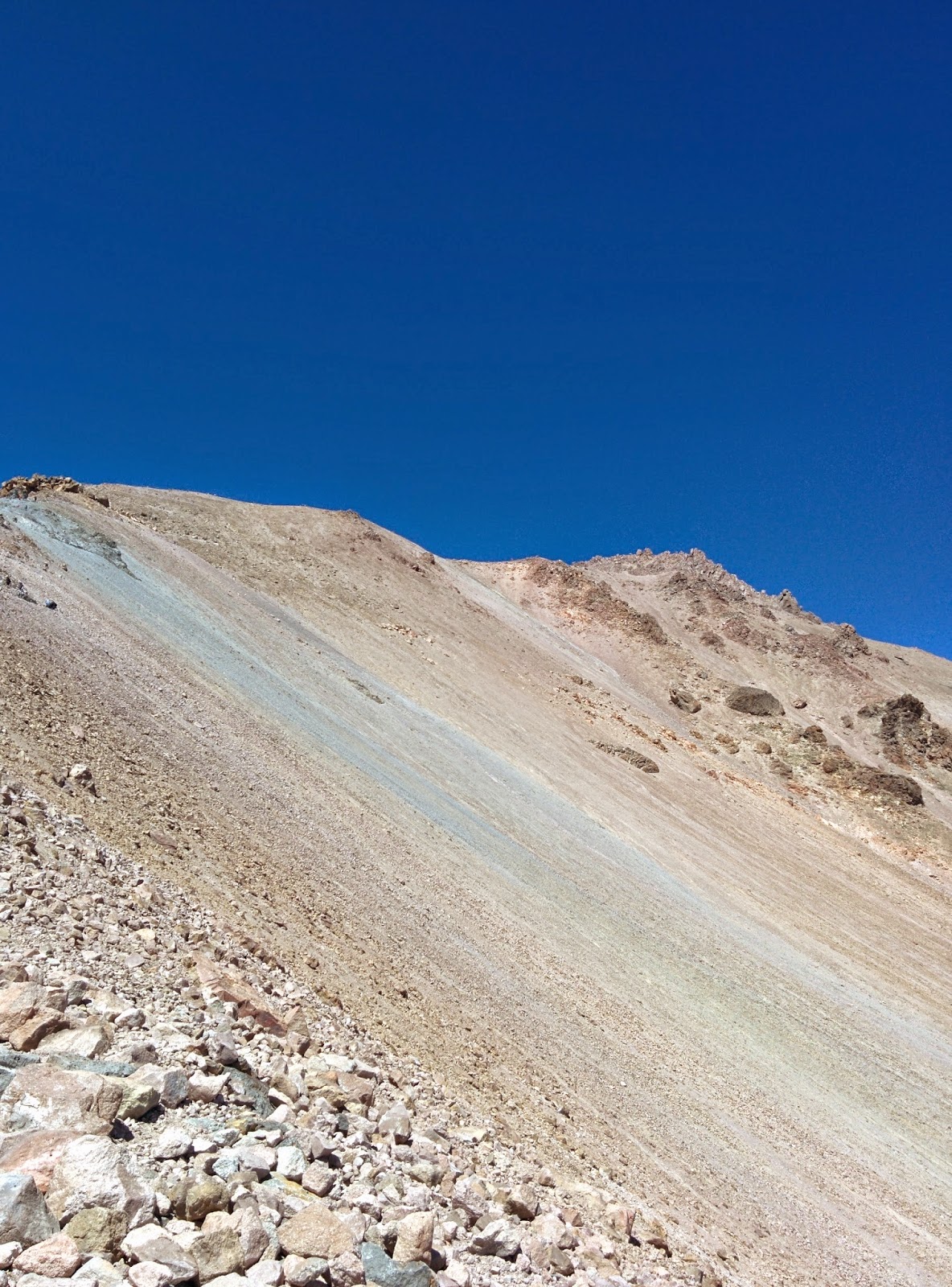 Don’t forget those moments when you get a great feedback or your plot idea works and then you feel like you could fly to the top of the mountain. 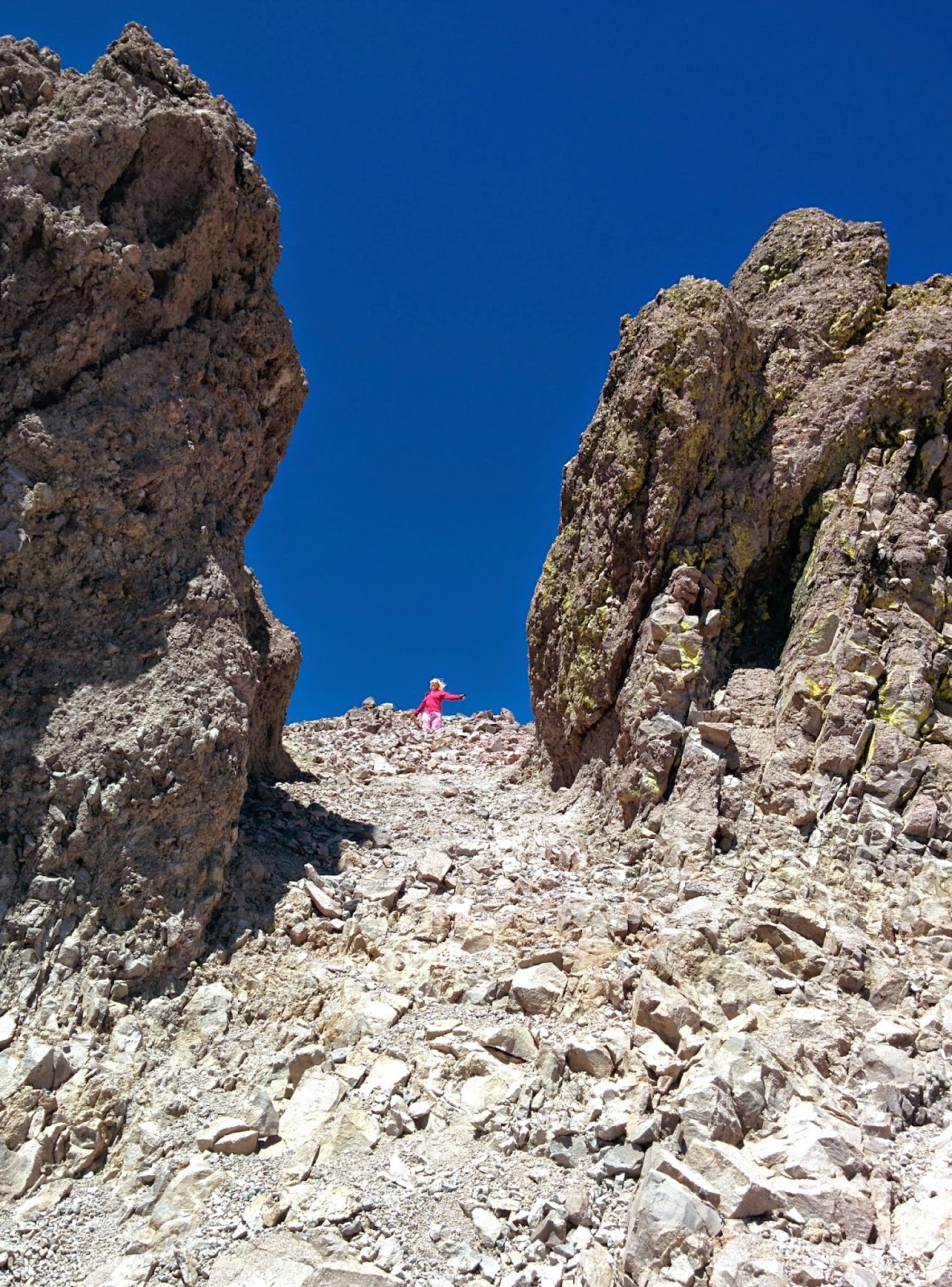 At a certain point you look back and you realize just how far you’ve come and decide that it would be an awful shame to give up now considering all the effort you’ve invested. Just put one foot in front of the other and see where it takes you. 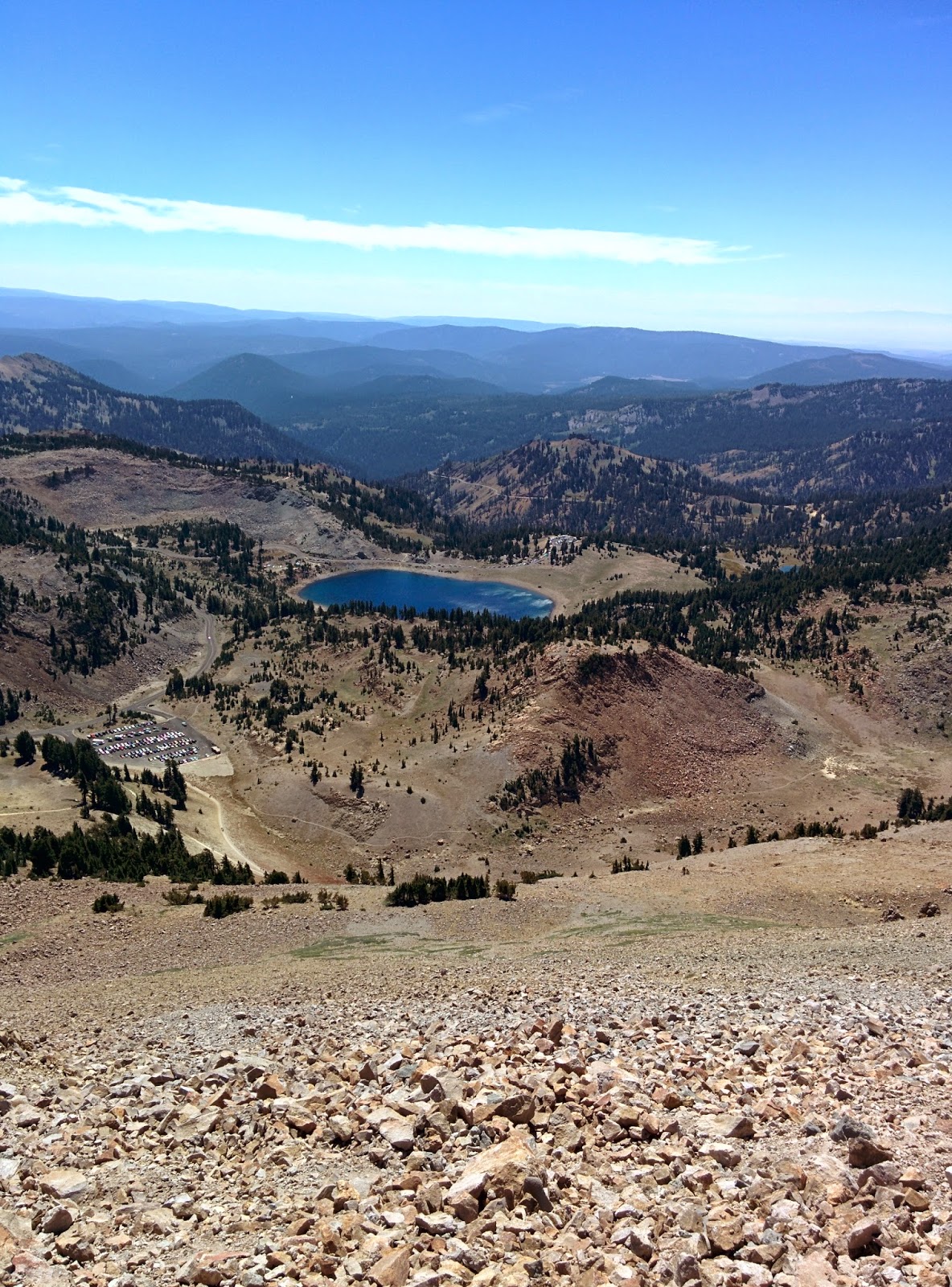 Not to mention the interesting characters you meet along the way. My writing buddies are simply wonderful, supportive yet honest, gentle yet guiding and best of all – great oul’craic! 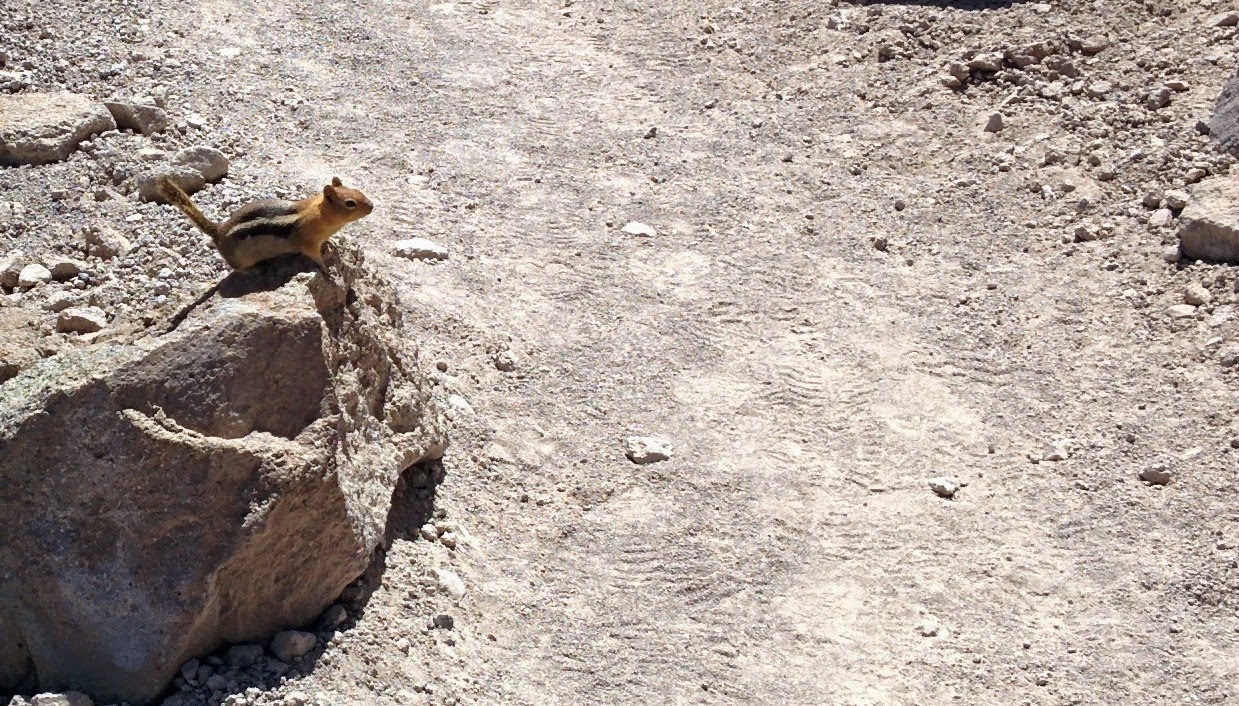 But the closer you get to the top the harder it is to keep going. The altitude was getting to me, my head felt sore and my muscles quivered. The 0.5 mile marker gave me hope. I pressed on wondering how the heck people climbed Everest! 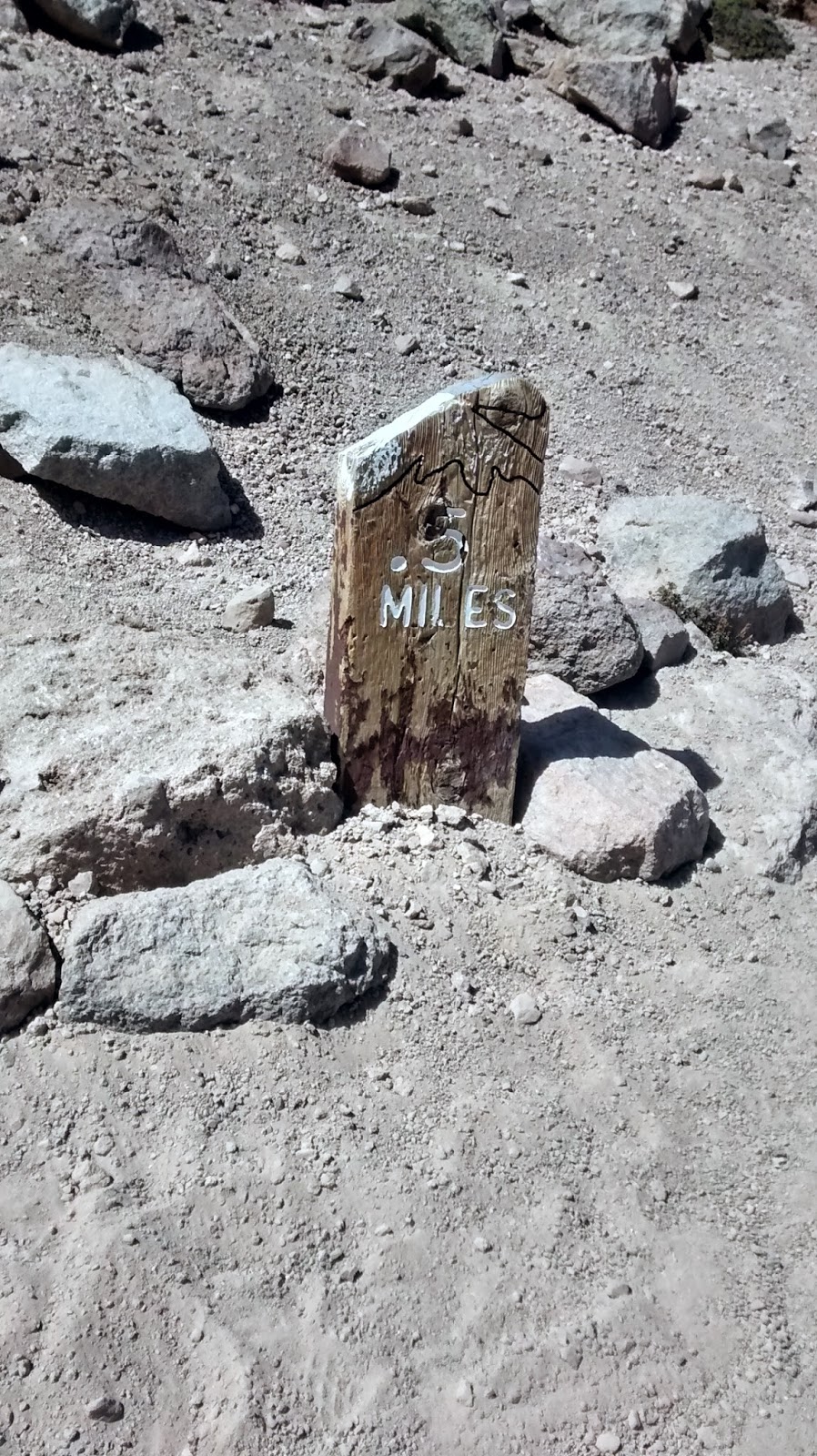 And then, at last the peak is in sight. That last bit looks heart stoppingly steep. But you’re here now and the decision is made for you – one last push! 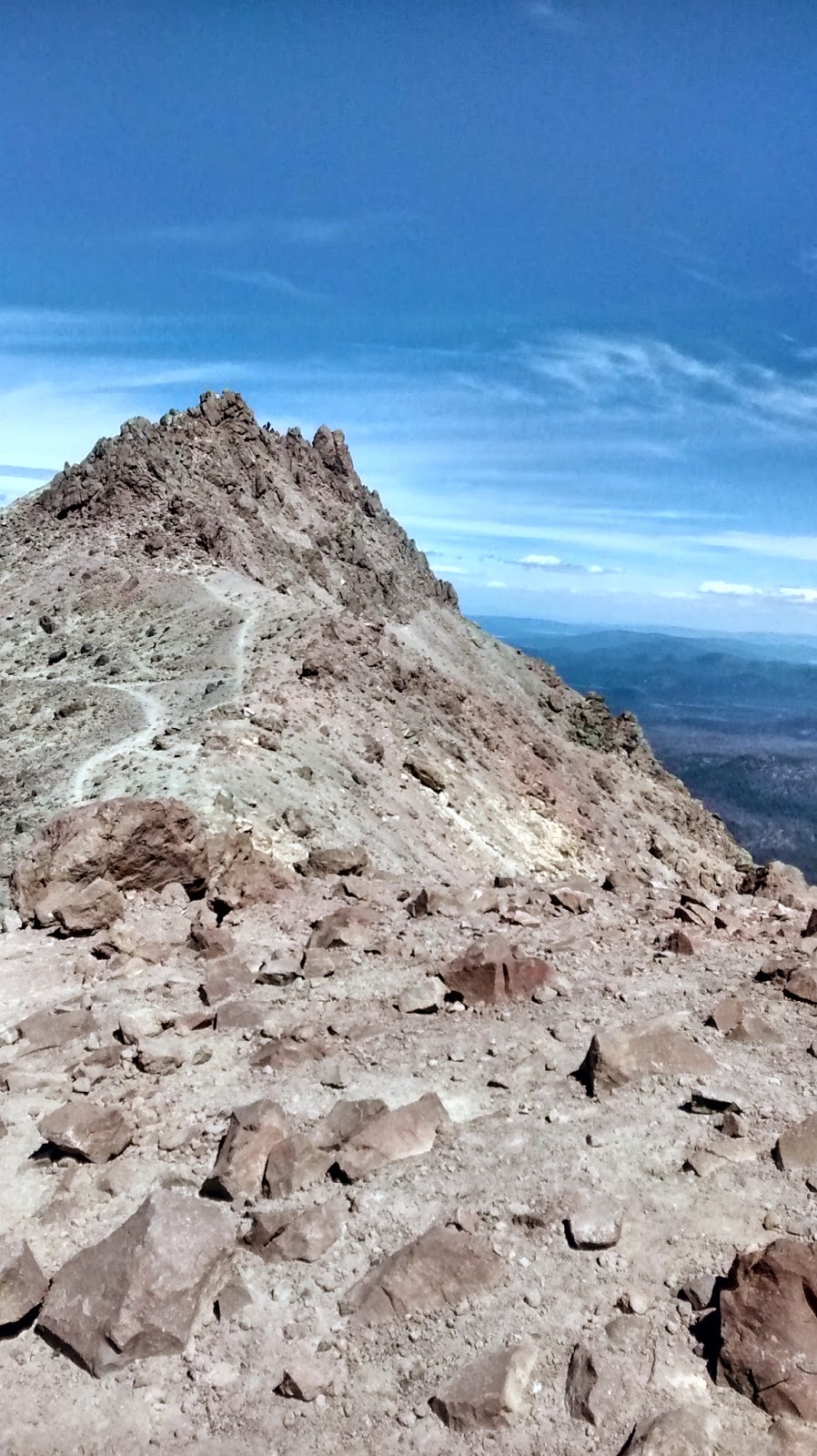 Then you get to the top. It’s a feeling you want to hold on to for a very long time. 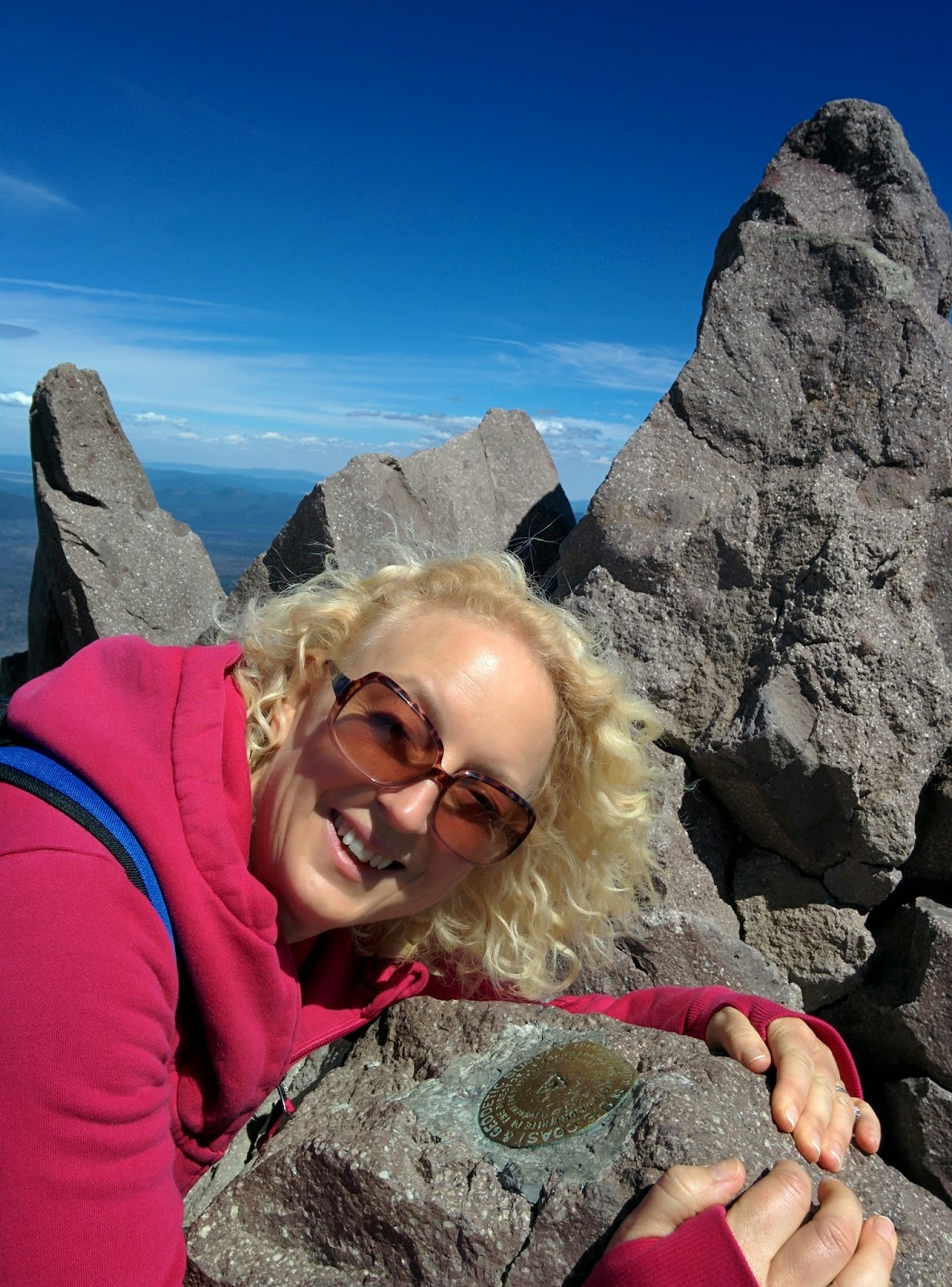 Until you realize that this is just the beginning of another stage in your journey. And so you sit on the edge and look over the precipice wondering if you’re ready for it. 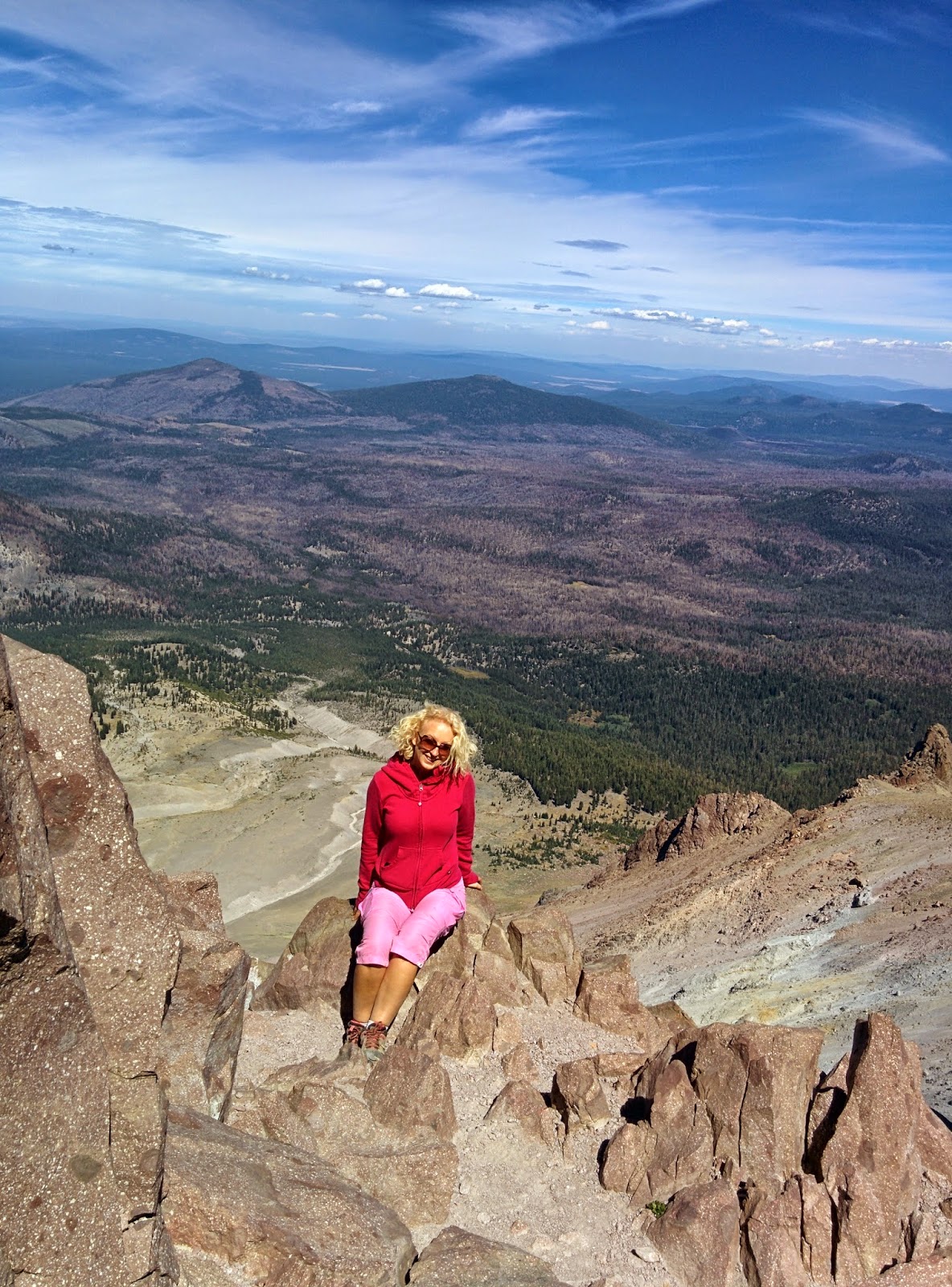 You always think on the trudge up the hill that going down will be easier, but on the way down you realize that you have bits which hurt now that didn’t on the way up.

In writing, here’s the scary part. When I publish everyone will be able to read it, to judge it, to hold an opinion on it and I have to tell myself, “That’s okay… I can do this. I’ll accept that everyone has different tastes in reading. I’ll ignore negativity. I’ll keep my chin up.” 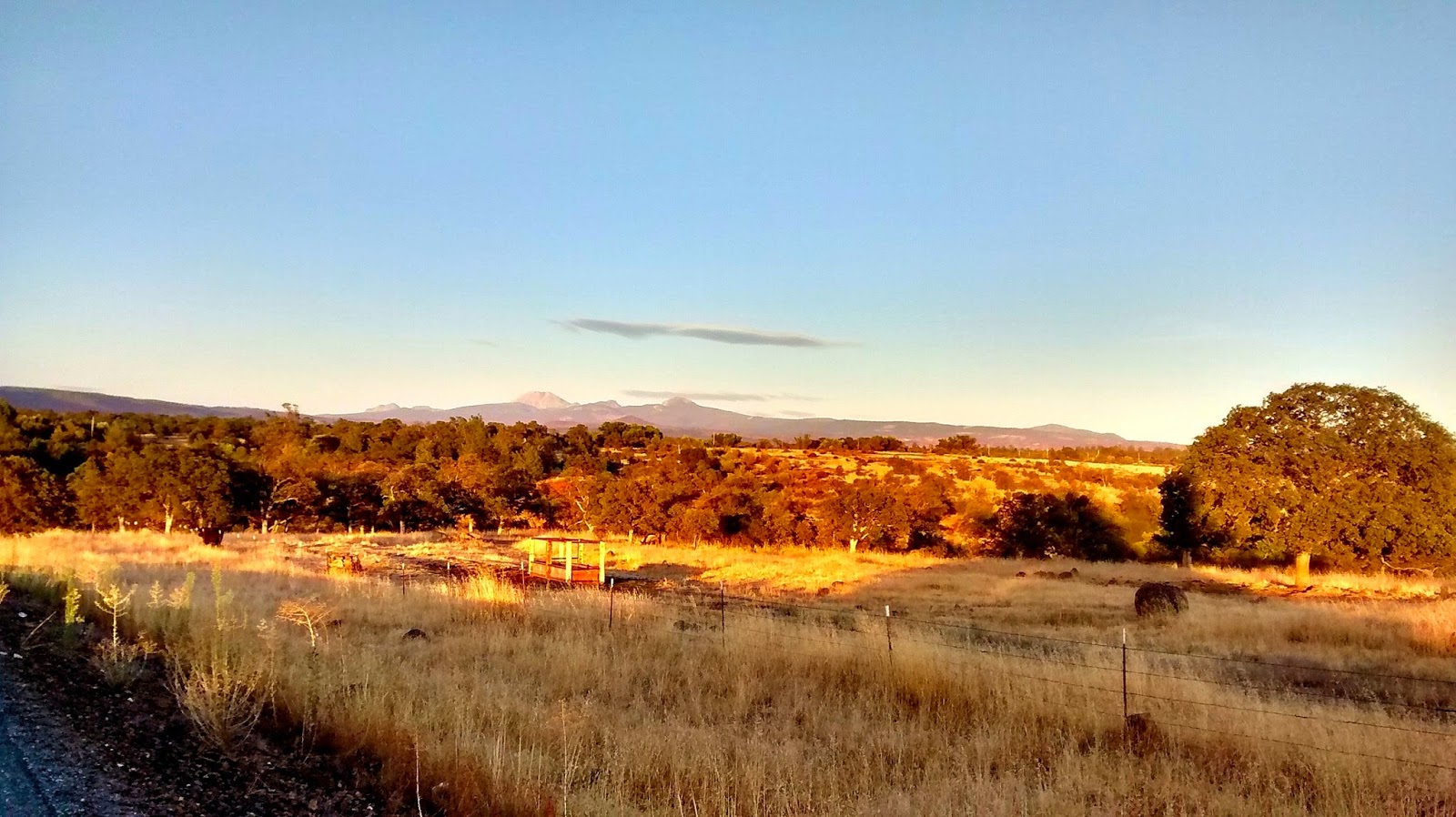 Looking at my finished novel, I sometimes find it hard to believe that I wrote that. In the same way that I look at Lassen Peak in the distance and think – I stood up there!
I’ll end the book-writing analogy there lest anyone think that the next few photos refer to dealing with critics!

This is in fact Bumpass Hell Trail where the mud bubbles at scalding temperatures. It’s a short hike from the trail head – 3 miles. Feels like 20 when you’ve just come down from Lassen Peak. It’s a great reminder of the fact that we are in a volcanic park and that something lurks below! 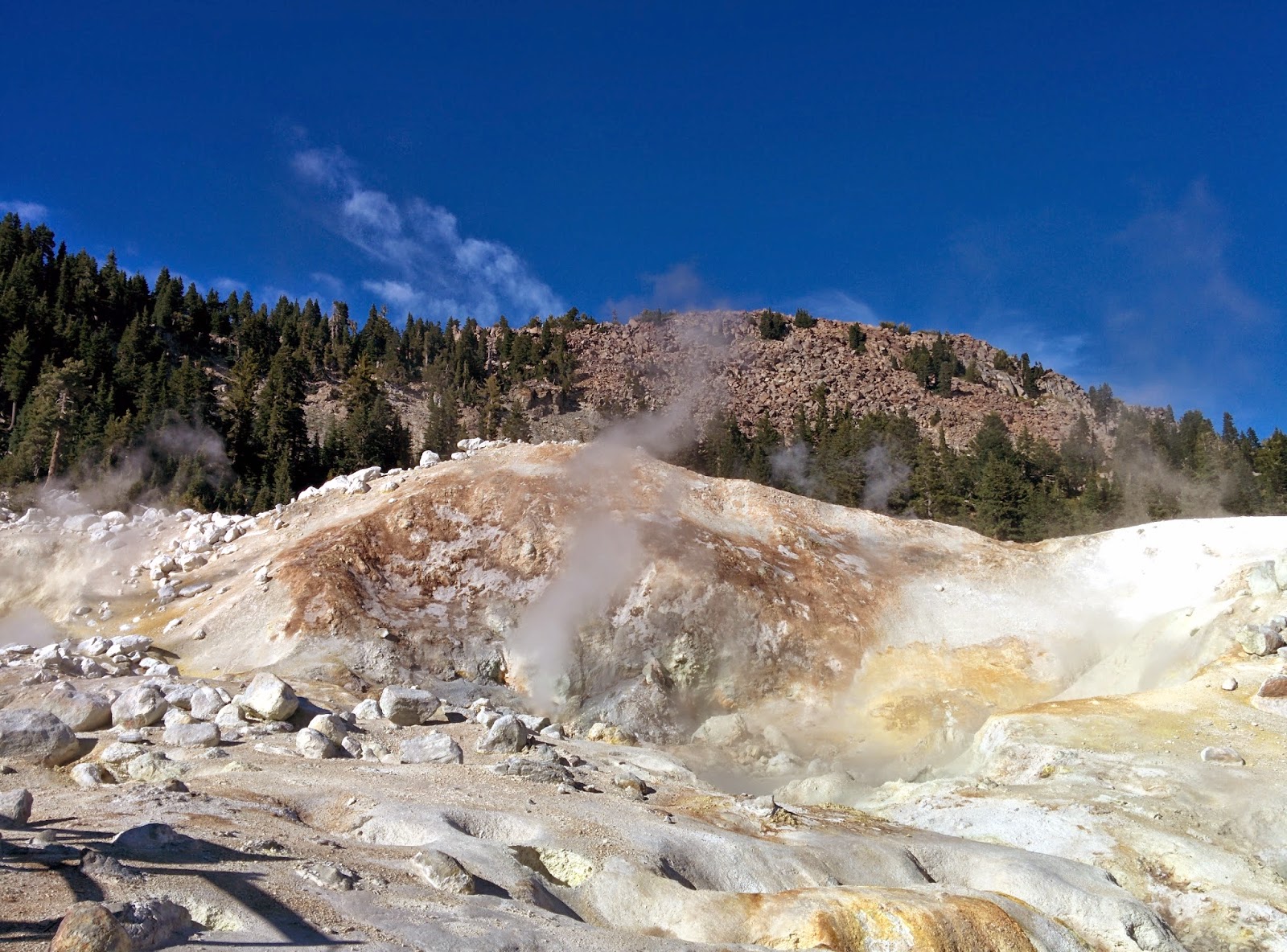 People are warned to stay on the trail as injury can occur – again I’m resisting the temptation to extend my analogy! 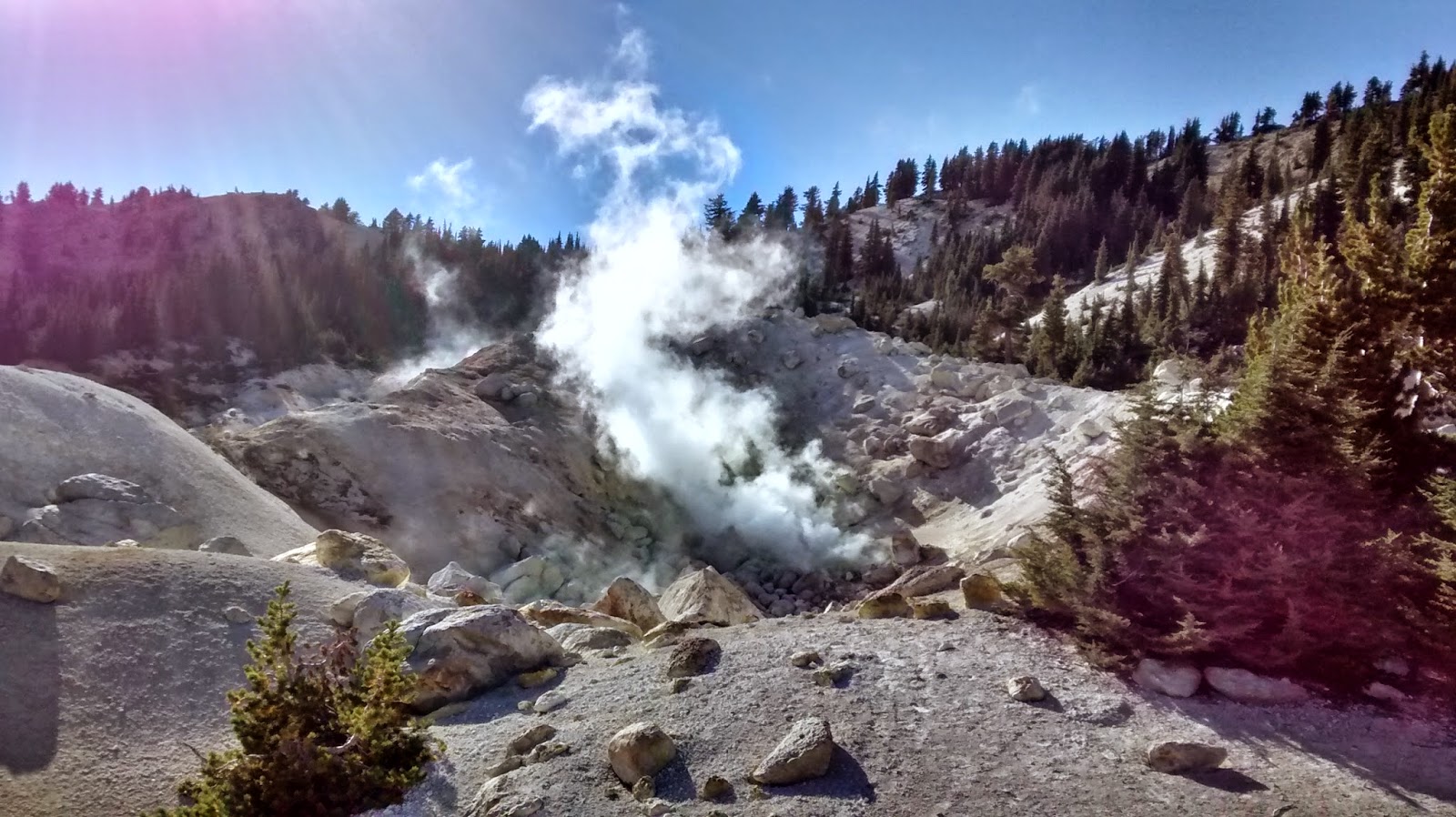 This pond was a beautiful color – I wonder what temperature it was. 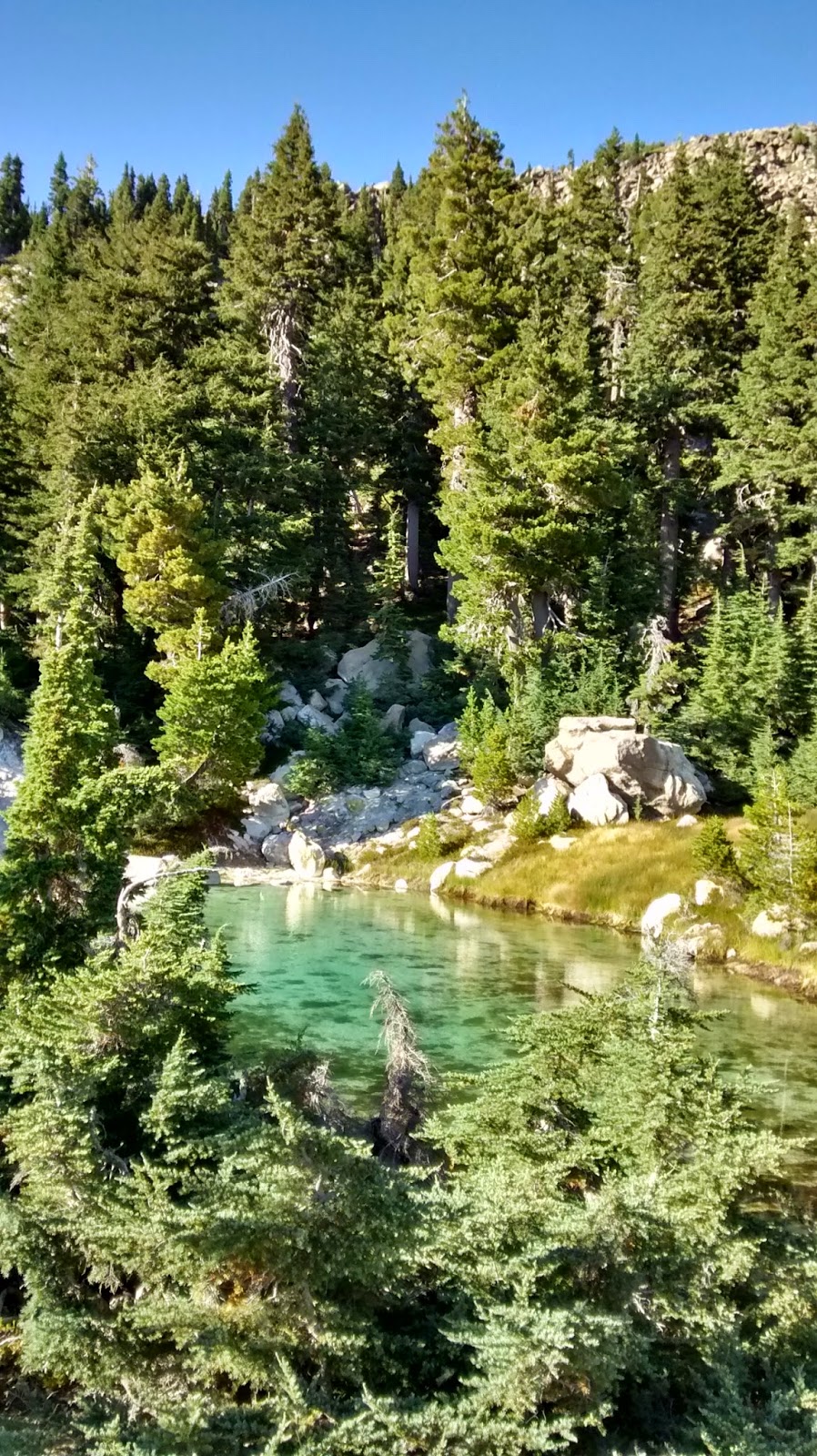 The next day we could barely walk. So we resumed our car touring plan and headed for Shasta Dam where it was hot hot hot! 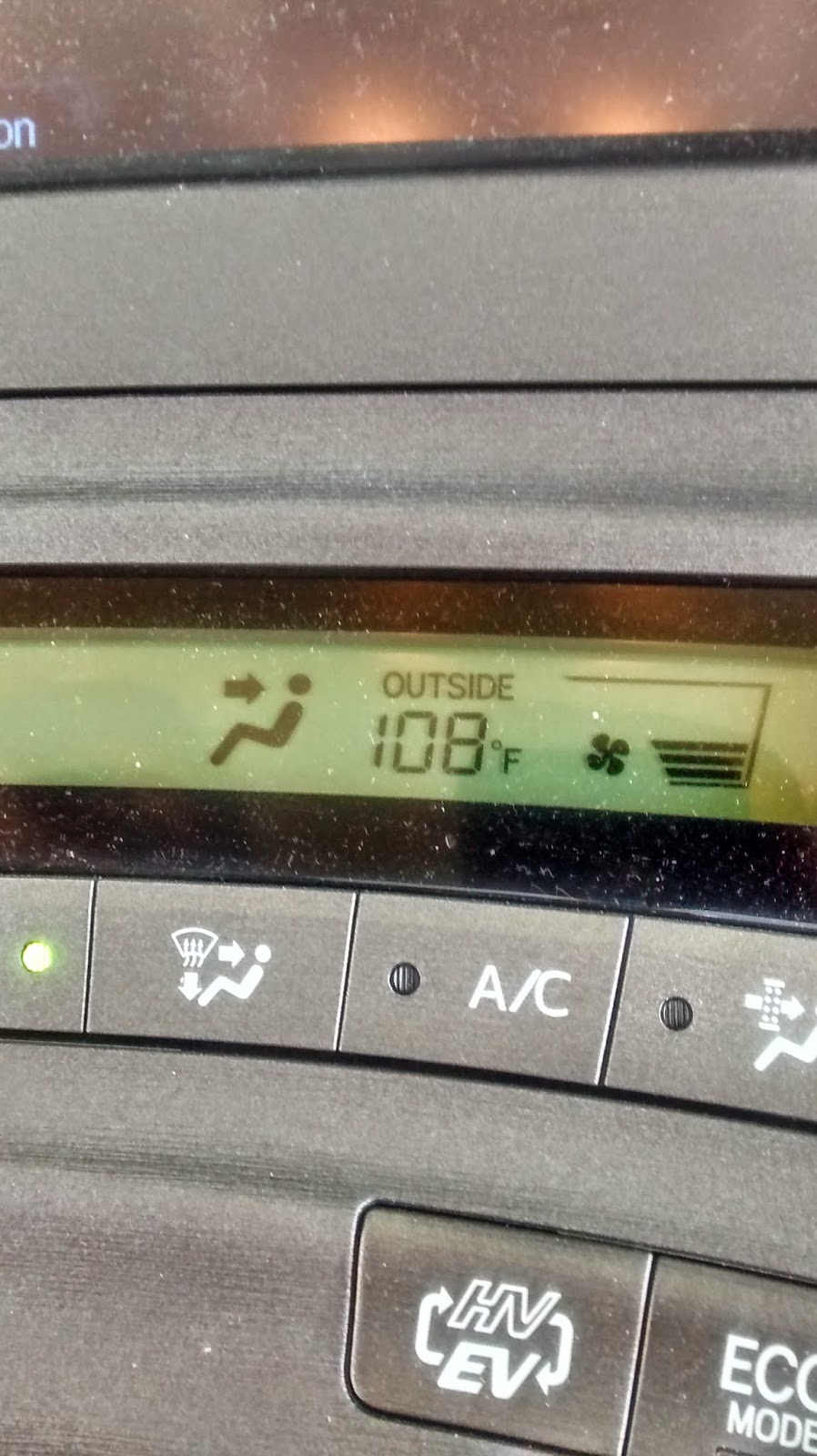 The dam truly is impressive. 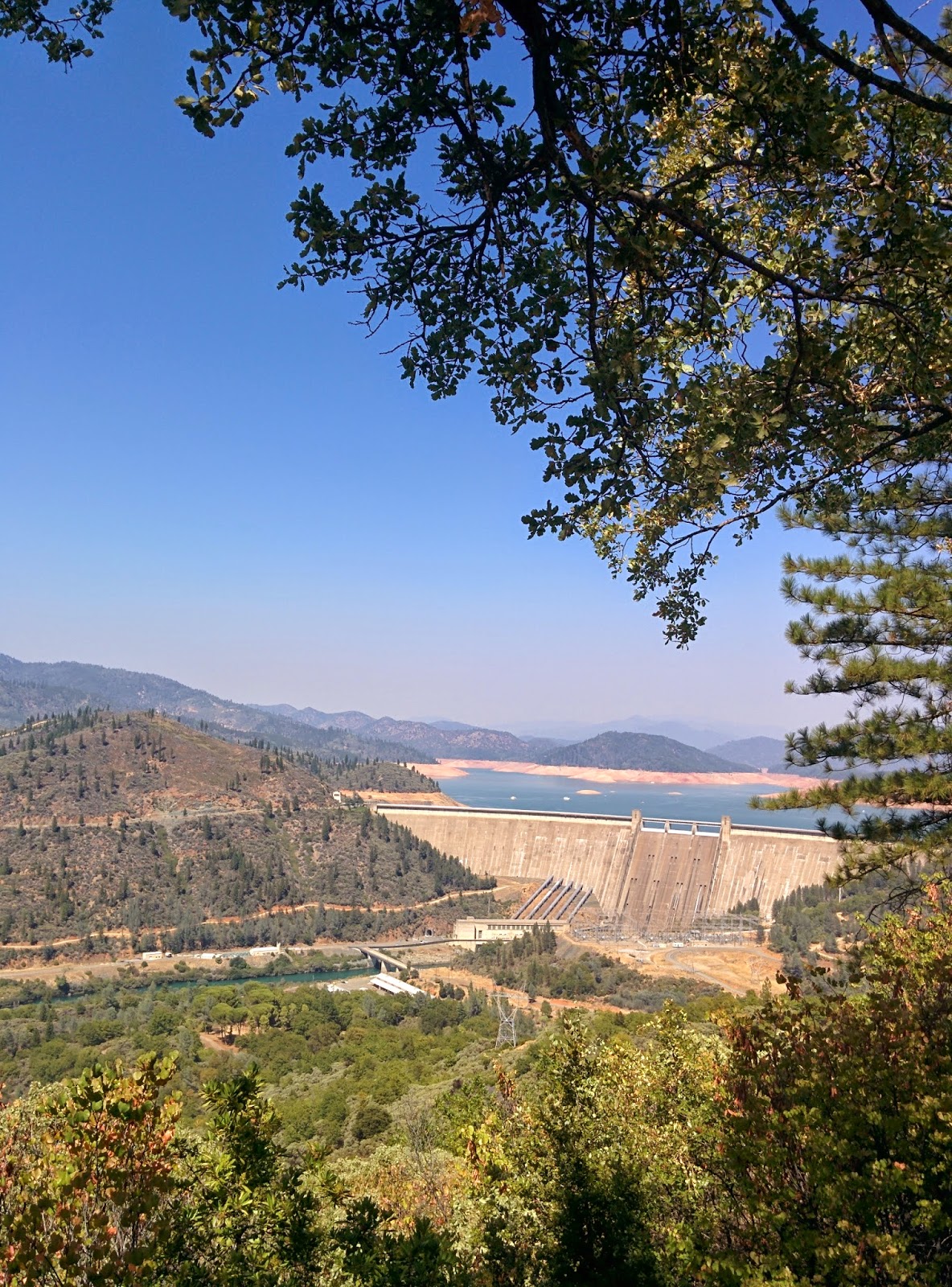 But the lack of water is scary. I came away feeling anxious. Lake Shasta has only 19% capacity at the moment. I really am wondering if I should put in a cool season garden as I don’t want to spend a dry winter watering veggies. As it is, we are not allowed to water between the hours of 8am and 8pm. Another dry winter will be disastrous!

Redding proved to be a good central place to stay and only 4hrs from home. We stopped by the sundial bridge before we left. It was nice to actually see some water in the beautiful Sacramento River.

But don’t worry – I’ll let you know when it comes out and how to get your hands on a copy!