One week to the day before the ascent up Mount Whiney, My Husband was diagnosed with shingles! So much for my spider bite diagnosis – note to self – leave doctoring to the doctors! The Doc said he was over the worst of it and provided he’d trained, there was no reason he should not do Whitney…

We were good to go…

In the run up to Whitney we Flintstones watched the weather closely. Wonder Woman and Superman where used to rough conditions and the Incredibles – well their incredibleness would bring them through it. But I knew we needed perfect conditions to pull this off – I’m way too much of a softie. A few days beforehand the area was bombarded with thunder storms and hailstones. Wildfires had sprung up left, right and center. We’d taken a couple of close friends, who were visiting on honeymoon from Ireland, to the high country that week, and we’d had a mad dash for the car during a thunder and lightning episode on Sentinel Dome – only a 2 mile hike.

But the departure day dawned clear and blue in Lone Pine, California. The rising sun blasted into our hotel room as I put the finishing touches to my backpack. Sunsets remind me of my Mummy – she always loves to watch them, but sunrises are for my Dad. Tears gathered and emotion tugged in my throat. He’d always loved daybreak and had died minutes before sunrise. I  think he knew that the rising sun would give us hope at our bleakest moment.  He had taken me up my very first mountain – the Sugar Loaf in Wicklow, and right then I felt him with me and knew he’d stay with me all the way.

The eight of us left the hotel at 7.20am and headed for Whitney Portal. Mt Whitney looked a long way up and I found it hard to believe that I might actually be standing on that distant peak within the next couple of days.

We parked and stashed any food and toiletries in a bear proof locker and hit the trail by 8.30am. The weather was perfect, thank God, and we set our own pace. The Incredibles took off, led by the Incredibles girl (11) whose pace never faltered for a moment. The Incredibles Boy (8), though irritated by an uncomfortable pack belt, never wavered and plugged up the slope, the bravest little soldier I’ve ever seen. With that for motivation, how could we give up?  Thankfully our training kicked in and we felt comfortable at our chosen pace. We decided that we would try not to get out of breath once we hit higher altitudes – getting out of breath lead to too many complications.

Our pace was steady, if slower than the Incredibles and Wonder Woman, though I think Superman enjoyed the craic at the back as he often waited for us, on the pretense that he needed a break…he wasn’t fooling us, and we loved him for the attempt!

By lunchtime we’d reached outpost camp at 10,000ft.  You could feel the effect of the altitude in your lungs. Simply moving was enough to have you out of breath.

Laughing was arduous – a pity because we were never far from it – especially when the conversation turned to the use of our poop bags or WAG bag (Waste Alleviation & Gelling). There were bets placed as to who’d go first, who go most often and who might go on poop strike altogether!

For a while conversation tapered and eventually we reached Trail Camp (12,00ft) around mid afternoon. Poor Wonder Woman’s wheels fell off as a piercing migraine and nausea send her to her tent and filled the rest of us with feelings of empathy and  helplessness. We ate dinner and watched the shadow of the mountains to the west creep up the sides of the mountains in the east, 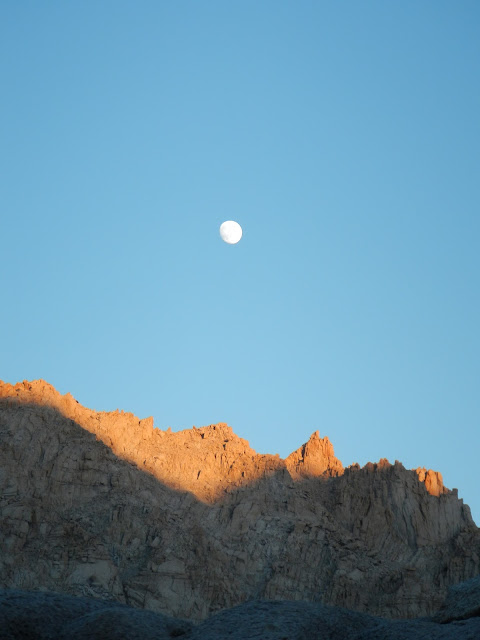 until the sun suddenly dipped below the ridge and the valley filled with a chilled shadow.

We raced for our warm clothes and snuggled into puffa jackets and settled in for the night – all of us in bed for 8pm.

We slept a little – at least there was a time period of about 2 hrs that we couldn’t account for. The moon was nearly full and we were luckily pitched in a moonlight shadow cast by an outcrop of nearby rocks. Even so it didn’t prevent the stars from glittering fiercely undeterred by the deep blue background they were set in.

At 4.30am I decided to take advantage of the predawn darkness and use my WAG bag behind a nearby rock – suffice it to say, it was not as bad as I’d thought it might be- quite handy in fact – but still doesn’t beat having a nicely plumbed en-suite! Though you’d be hard pushed to find a toilet with as nice a view…

By 5am the sun was glowing its entrance to the eastern sky as a red ball of light. 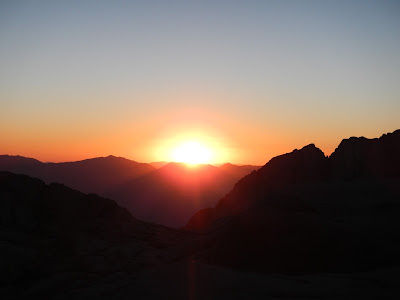 Wonder Woman had recovered and was raring to go. We ate quickly and were on the trail for the summit by 6am. 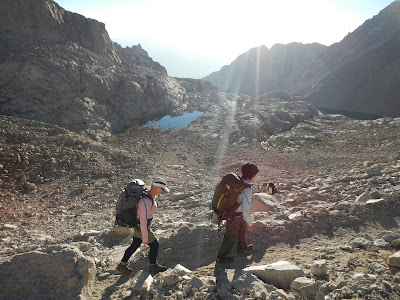 We’d been looking up at those switchbacks since we’d arrived at Trail Camp and though I know it took us hours to get up them, for us one slow step at a time, sucking as much air into our lungs as possible, I think one of the side effects of altitude is how it affects memory. 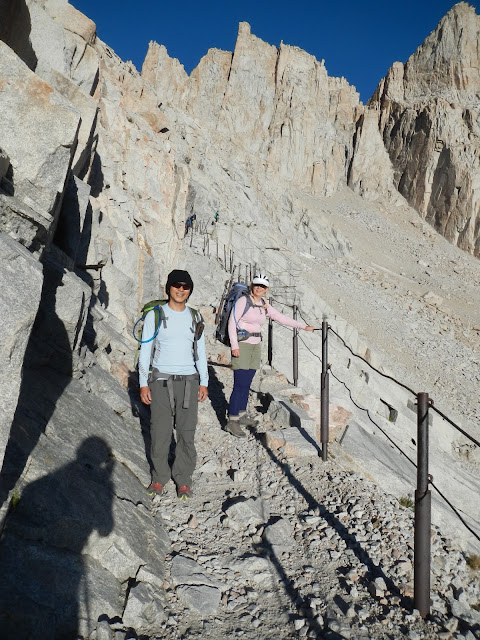 When I look back, I feel like it didn’t take that long to get up to that first ridge. At Trail Crest, where you go over the ridge and slide in behind the sky-piercing peaks, Superman – now firmly established as our mountain guru, advised us to don a thin fleecy and a wind proof jacket. 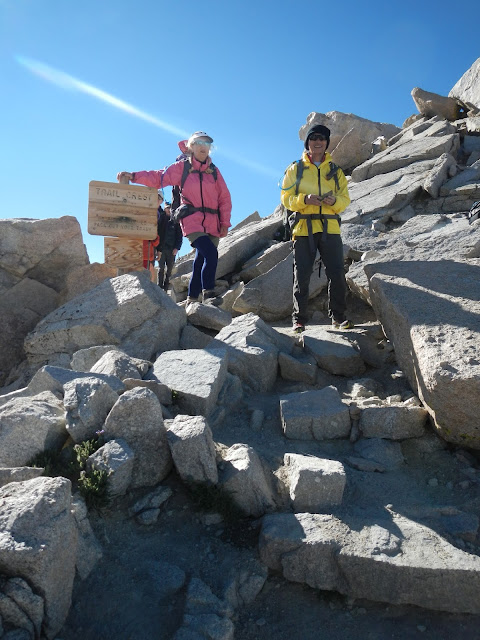 We took his advice and began the next bit which I can only describe as the Valley of the Shadow of Death. 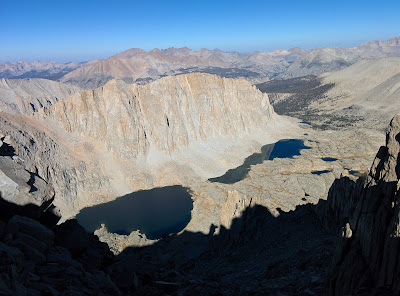 I don’t know why I hadn’t considered the fact that we’d have steep drop-offs and “scary” bits. Denial, I suppose. I’m just not great with heights if I’m freestanding – I get woozy and sway…vertigo sets in. 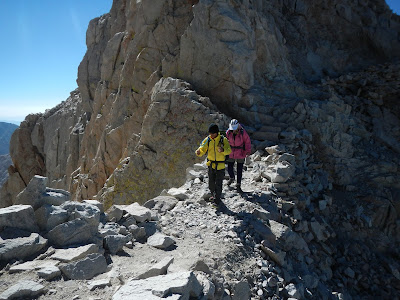 So this next section was arduous but stunningly beautiful, and I just focused on breathing because that had become the biggest challenge. My hands had swollen with fluid and looked awful but weren’t painful, so I didn’t pay much attention to it.
Again, we were behind the others but they waited for us shy of the top, so that the Incredibles, Superman, Wonder Woman and the Flintstones all reached the summit at the same time. It was amazing!

Remember where the big red arrow pointed in the first photo? That’s where we were standing!

We chilled out a bit, took photos, and drank in the scenery. 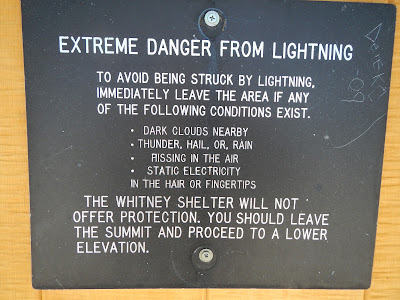 Then another climber reached the top and roared out in a booming voice for all to hear, “This is not the day we die…” followed by some probably famous motivational quote, which because of the altitude none of us can quite remember but …it was good! So good that everyone cheered and clapped. It was really Hollywood.

As our wee Irish group looked at each other bemused, I said, “Well, we’re on the top of the highest mountain in continental USA. You wouldn’t expect anything less!”

“Yes,” said Mrs. Incredible, “But where did he get the breath for that?”

I was looking forward to the way down.

All downhill – I thought it couldn’t be easier but at about 13,000ft my wheels fell off. I got a splitting headache and then needed to pee every 10 minutes – nowhere had I read anything about that as a side effect of altitude. It was a good job I’d taken a spare (clean) Wag bag with me too. I needed it – twice! Then nausea kicked in. I still had about 2 or 3 miles to go. I could see the lake we were camping by. If I walked anymore than a dozen paces, I had to sit down and catch my breath. Getting out of breath made me actually retch. It was a slow descent. I remember the thought I had at the time, “This is hell. When will it end?” But as I look back the memory of it is blurred, as if looking through a soft focus lens.Was this another effect of altitude?

I walked into camp looking like a White Walker (this told to me by Mr. Incredible later during the postmortem!) My Husband put me to bed and Superman gave me an electrolyte drink after which I started to rally and soon had returned to the land of the living, thank God.

Dinner was more jolly, and we chatted about our day as we watched the sun head towards the peaks. 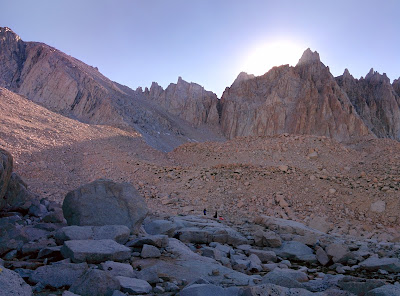 This time we were prepared with our warm clothes as nature’s lights switched out. 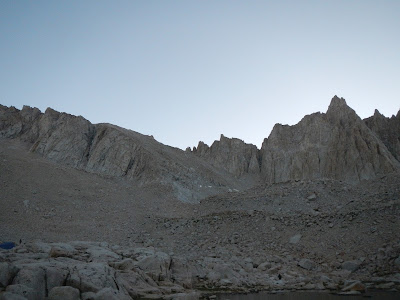 Bed by 8pm and up the next day at 4.30am. I was starving and Mrs. Incredible had some leftover freeze-dry dinners which I gratefully accepted. Himalayan lentil and rice – a true breakfast of champions!

The trek out was easy and enjoyable, and the higher oxygen content most welcome. We had to strap our WAG bags to the outside of our packs, so there wasn’t much conversation as we’d to stay well back to avoid each others WAG bag smell! There was plenty of toilet humor, of course, commenting on who had the biggest bag, who’d filled their bag and had been forced to use another person’s bag, who lost a bet and had to carry the entire Incredibles family collection down the hill…  but we agreed that what happens on Whitney stays on Whitney – except the actual poop of course!

These challenges (I’ve also done the Alcatraz swim and the Grizzly MetricCentury in the recent past) are, for me, less about the fitness and all about the interpersonal relationships. I enjoyed watching My Husband bond with and really get to know these friends I’ve had for 20 years. Seeing the Incredibles children rise to such a huge challenge with the gusto and the determination gave us all something special that you don’t get in ordinary circumstances.

As a metaphor for life, Whitney has it all. Getting to the top is just half way there. You aren’t done until you are back down and for someone who feels that they are half way through life, like myself, it’s okay if its “downhill” from here. Downhill is not a bad thing. Downhill is where the breathable air is, the place where you can reflect on the journey uphill and what it’s like at the peak. It’s were the vineyards, flushing toilets and ice dispensers are too. For some, climbing high may indicate success, but I’m not sure I agree – it’s by no means comfortable up there. Lushness and beauty lie in the lower slopes. High up, the peak is exposed and the rocks bare. Success is enjoying wherever you are, high or low. And remember, no matter when or where it happens, you still have to carry all your shit with you, uphill or down.