Mileage  0 miles States – Utah
It seems to me that most of Utah is a national park and rightly so. Our eyes have been spoilt by the dramatic scenery for several days now. Moab is right beside two National Parks. You could spend a week here and never hike the same trail twice, not to mention all the water sports and biking on offer here too. We’re coming back…for sure!
We began our day in Canyonland’s Island in the Sky, planning to view the Arches National Park around sunset. The drive through the park is the typical knock-your-socks-off Utah style beauty. 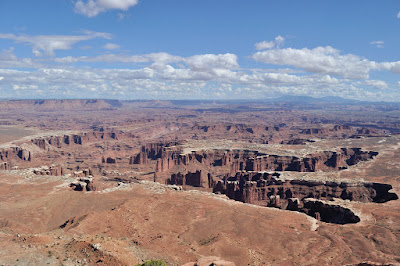 This rock looks like it will fall any minute! 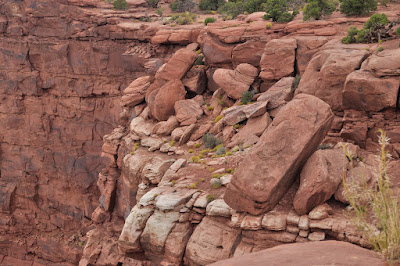 We hadn’t planned on a long hike, but the urge to wander struck at Upheaval Dome. Here’s the science! 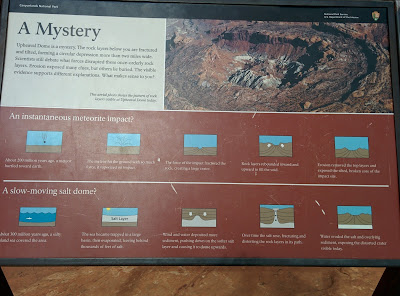 We hiked to heart-stopping cliff-edges, leaving only as black clouds tumbled in towards us. 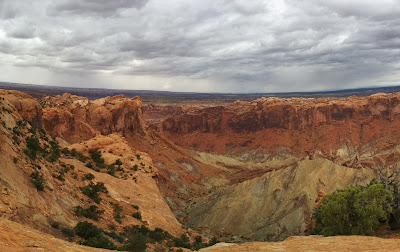 This would not be a good place to be in a lightning storm. I’m not sure if it was a mistake to read Shattered Earth this summer. It’s an account of hikers caught on Half Dome in Yosemite, California, in a lightning storm that killed two people and severely injured a couple more. Perhaps, it’s a good thing I read it. I am subsequently more aware of the dangers of electrical storms. 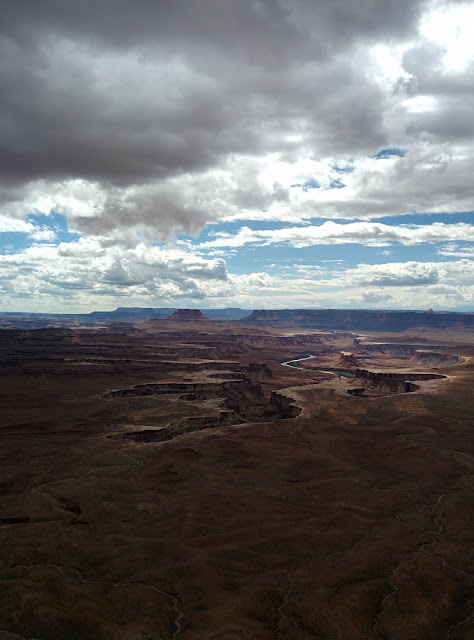 Fortunately the skies were clearer on the other side of The Island In The Sky. 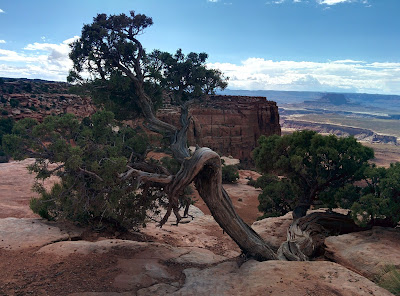 Island In The Sky is at the confluence of the Green River and the Colorado River. Major John Westly Powell explored these rivers in 1869, and as I sat looking over the convolutions of the Colorado River in the canyons below, I tried to image what it must have been like to see this land from the river, turn after turn, looking up at the sheer canyon walls and not knowing what they would find next. I’d be lying if I said that there was no envy mixed in with my admiration for that geologist and explorer. 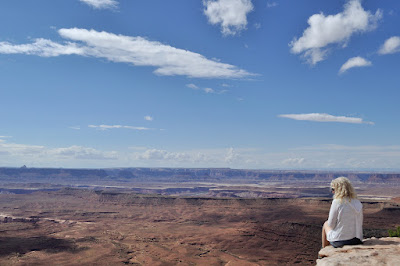 At Grand View Point Overlook, I gazed down at the Colorado River with renewed respect. Yes, I’d seen the Grand Canyon, but it’s actually hard to see the river and connect its actions to the creation of such a phenomenon. From this vantage point, I could see the Colorado River winding and looping in the distance, a testament to perseverance. It carved out these spectacular canyons one speck of dust at a time, its only tools the rocks and sediments it carried, and gravity it’s relentless driving force.

We spent way too much time in Canyonlands and not enough in Arches, but we like to leave something to come back for…did I mention I want to come back? This park has over 2000 Arches. I want to see them all! 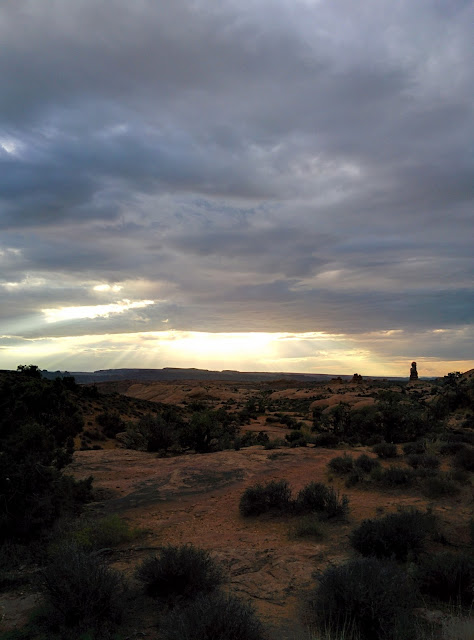 What time we had in Arches was spent at the Windows area, during sunset. The play of light on the rocks gave us great photo opportunities. 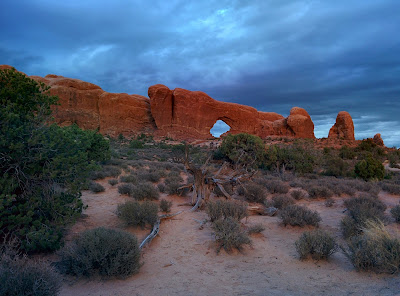 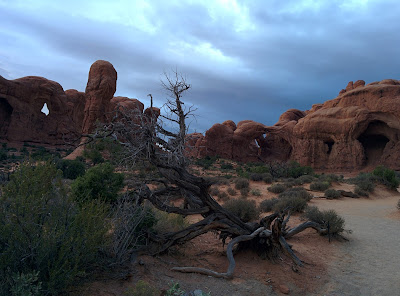 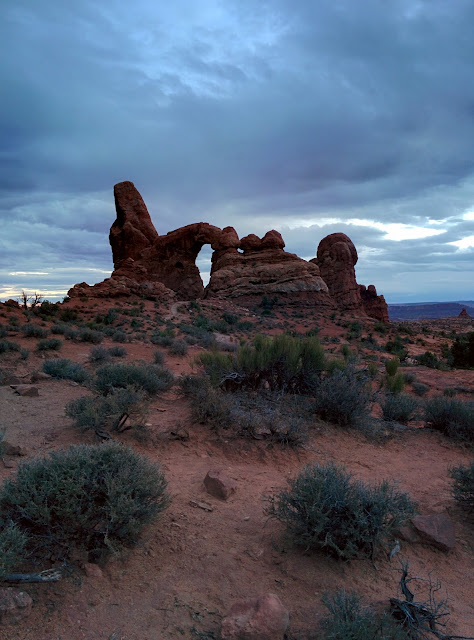 But all too soon we lost the light and the cloud cover obscured the star display. It was time to head back to Moab and feed our bellies having stuffed our eyes full of goodies all day.
It was dark when we arrived back in Moab. We were hungry and tired, but at least we knew we had a roof over our heads, albeit one I’d had to clean myself! We decided to keep it simple and go to the Denny’s beside the hotel for a quick dinner. Plain food, good prices…we could eat gourmet at home. But there was nothing left on the menu other than beef burgers! Everything had sold out. Now, this wasn’t a problem for me, but My Husband hates the taste of beef. So we had to get back into the car and drive into the town center, where we found a nice wee spot that was just the ticket. Not finding something to eat in Denny’s was the last thing we’d expected, but we decided that it was a better drama than the usual nightly drama of finding somewhere to stay.
That evening we took advantage to the free WiFi in our hotel and pre-booked the next 5 nights stay. Good job we did. There was nothing at all in Yellowstone Park and very little in the towns at the gates. What little we did find was eye-wateringly expensive. Eventually, we found something that fit our pockets, if not our sensibilities.
Tomorrow we’d head north and leave this wondrous area. I’d be sad, not feeling quite ready for a change of scene just yet, but I looked forward to the next stage in had become an epic journey.
Byddi Lee
Filed Under : Arches National Park, Canyonlands, Island in the Sky, Moab

2 replies to Canyons and Arches