It’s so ripe with possibility – a whole new year to start over and do things better.

We had a visitor early this morning – A coyote in our driveway at 6.33am captured on our new security camera.  See the full clip further down. 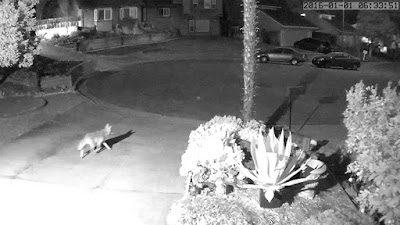 This kind of thing excites me, probably because I’m a biology geek.We live close to the hills, and I enjoy lying on a summers night listening to them calling to each other with their high pitched howls. I don’t even know why…I just do. I know that some of the neighbors are anxious about it, but there’s not a lot we can do about it other than move house.

I chose to view this as a positive sign for the year to come.

In North American Mythology the Coyote is a complex personality. A trickster, yet wise, he symbolizes transformation, and teaches us that we have to answer for our actions. In many stories, he delivers a lesson to us humans in the hopes that we will learn from the errors of our ways and make changes accordingly.

And with all this he brings humor, with which to gain a sense of perspective, so we don’t become bogged down in the serious, sadder elements of life.

It’s easy to look at our planet and see all the bad things, the evil deeds, the horror in it. It’s easy to feel “What’s the point in trying to fix the world? What can I do? What can anybody do?”

But during the week I read this report – 11 Reasons Why 2015 Was A Great Year For Humanity.

Read it for yourself – It will do your heart good.

Here are the points that struck me…

Education has reached nearly everyone!

“…we are in a world where nine out of ten children are learning to read and write. The World Bank now says we’re only one generation away from a world where every single person is literate.”

This is astounding – it actually made me cry. Education is the road to truth and freedom.

Extreme poverty on Earth is at it’s lowest rate ever. This is measured as a percentage, and yes, having 702 million people still living in extreme poverty in still too many, but it’s down by 200 million from the previous year, and that fact alone has me choked up. But let’s not get complacent… there’s more work to do.

Great advances have been made on fighting diseases such as AIDS and Malaria. Polio is on the brink of eradication. That is cause to jump for joy!

There’s more in the report but these were the points that sung out to me.

I remembered a piece of writing I did during a time when the news reports of atrocities from around the world were more depressing than usual. That day, I decided to make up my own headlines – pure fantasy, I know, but something to give me hope. I didn’t post it because it sounded silly and naive in the face of the awful lives that some people have to endure. But when I read the above article, I realized that we do have cause to celebrate.

So I decided to free the words – let them fly into the universe, like scattering seeds on the earth. Perhaps some will germinate, imagine some of of them taking root, growing, setting more seeds and spreading – love, an invasive plant!

So here it is – picture it as a newspaper article…

World peace has broken out unilaterally across the globe.

Hatred has been halted.

Countries with Naval and Air Forces have united to transport clean water, food and medical supplies to the poorest regions of the planet. Soldiers are exchanging their guns for garden hoes, shovels and guitars. All governments have pledged unequivocally to use technology to cleanse the air, water and land.

Drug lords are getting people high on hope by funding research for cures to all diseases and are helping addicts get clean instead of supplying them with poison.

People with plenty have realized they have much more than they require and are sending their surplus to those in need. Sports stars are playing for fun. Performers are singing for joy.

The world is dancing not demonstrating, designing not destroying, dreaming not dying.

Immigration is no longer an issue…no place is intolerable to live in because we, as a species, have united in curing the problem and stopped fighting over the symptoms.

Greed has turned into giving, without keeping count.
Envy has evaporated and kindness filled its place.
Love has conquered lust.
Pride has capitulated to humility.
Sloth has surrendered to diligence.
Gluttony has given way to moderation.
Wrath is won over by patience and understanding.

People are listening to each other. Communities are communicating. There is a torrent of tolerance and no-one can stop it… At long last, and not before time, Homo sapiens are simply treating each other humanely.

When I was a little girl I’d often complain to my Dad that something, usually to do me with not getting my own way, “Is not fair!”

My Dad would answer, “Life’s not fair.”

To which I’d reply, “But you can start by making it fair.”

I had this idea that if everyone pulled together and tried we could make life fair. Even as a child, I realized that we are all parts of a whole and if we all played our parts with justice, tolerance and respect, it will pave the way to peace (and not just me getting my own way, which admittedly was my goal when I tried that line on my Dad! Which kind of spoils the sentiment a little, but I’m blaming the playful coyote on that one!)

2015 was a great year for me, the Irish Book Tour, Mount Whitney, an Epic Road Trip to Yellowstone, but 2016 already glows with promise. There are fabulous plans in place and I can’t wait!

Happy New Year – I hope it’s the best one yet for me, you and the whole wide world!