The doctors office was tucked way back in the bowels of a building that has been around since before Christopher Columbus discovered the “New World.” Two doors with complicated intercom systems later, I found myself sitting in a tiny waiting room that had a piano taking up a quarter of the space. The opposite wall was dominated by a huge old painting with a clutter of “objects d’art” covering the sideboard beneath it. There were books everywhere, a low love seat and two bistro chairs. The one other person there explained that she wasn’t a patient, she was waiting on her friend and I was next.

The door to the doctors office opened delivering two men and two dachshunds – one a scruffy long-haired ginger and the other a sleek chestnut brown! Even as I admired how cute they were (the dogs, not the men) I had a moment of panic. Had I mixed up the French words for Doctor and Veterinarian? Had I booked myself in for an appointment with an animal doctor? And if so, would he write me the prescription I needed for my migraine medication anyway?

But no need to panic – this was a doctor’s office and the doggies belonged to him. I had my consultation, with the adorable scruffy ginger mutt sitting on my knee. (I seem to have an affinity for shaggy haired doggies – being shaggy haired myself). The prescription was written and doggie kisses received and I left the office thinking, “That would never happen in the US!”

They do love their dogs in California. In fact, I think it borders on the ridiculous. For example, I have a friend there who buys shoes for her dog to wear. She says its because the dog’s paws get sore when it goes hiking with them. I worry about the coyotes… they are barefoot and outside all day and all night long!

I have another good friend who has a stroller for her dogs in case they get tired walking! Maybe they’re wearing the wrong shoes. People dress their dogs in California, some claiming that their pooch gets cold! Cold? In California? For goodness sakes – I only wore clothes there because I was being considerate of others!

But the French are crazy about their dogs in a different way, and in a way I can understand. They allow their dogs to go pretty much everywhere with them, the doc being a great example. (The doggy poop on streets issue seems to have been addressed from what I’ve seen too, thankfully.)

My French teacher allows her adorable Chico to sit in on our lessons, which isn’t really fair since Chico already knows more French than me! 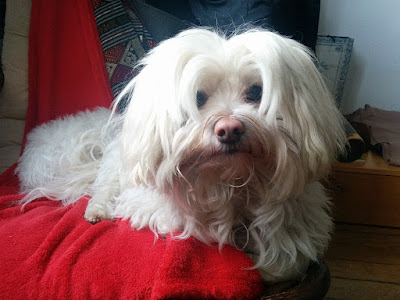 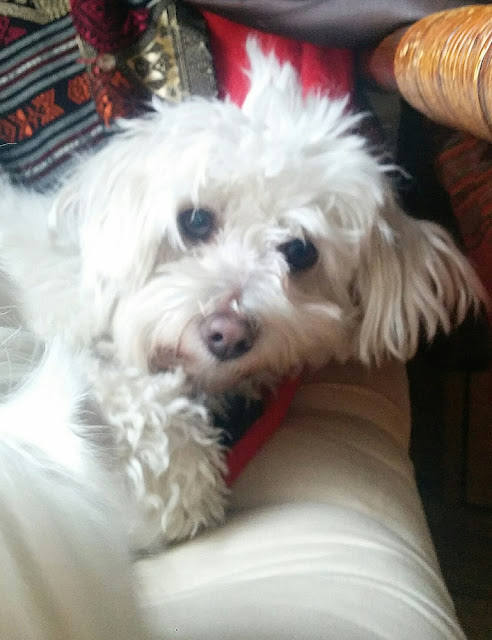 The doggies agree with me – learning French is very tiring! 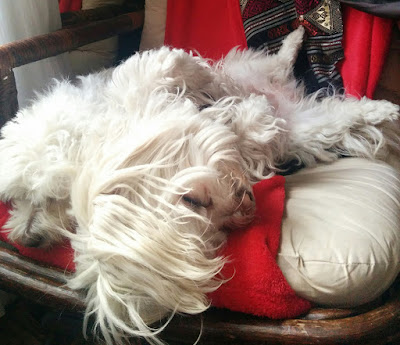 When Chico lies like this my French teacher tuts and says with great sympathy, “Ah Chico,

I was really surprised to see dogs inside restaurants, even fancy ones – by fancy I mean “10th wedding anniversary” fancy. We aren’t just talking “service” dogs here. It seems to me that concept is unknown to the French. All dogs are service dogs here.

This little guy walked up and down a bit during his people’s meal but behaved himself really well! He is the first I’ve seen wearing a coat. What is sad is that his coat is newer and more trendy than the one my husband insists on wearing! 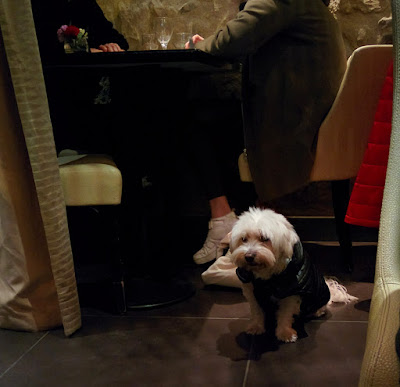 I shudder to think what it would be like to bring My Mums dog Rhubarb into a restaurant! But she too is a cutie-pie and I have to include a picture of her. 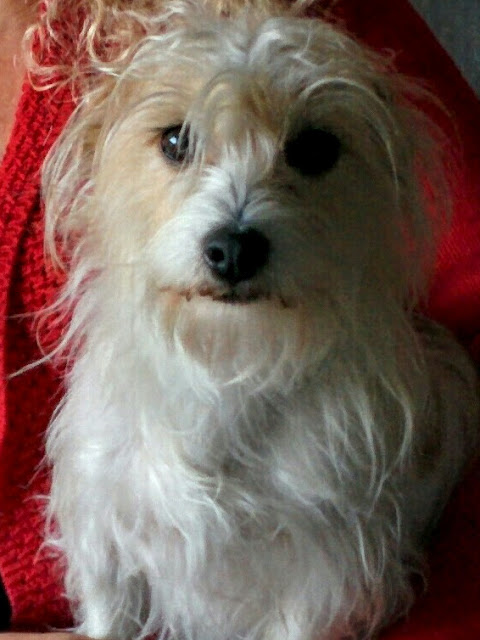 And of course one is never enough! She likes to lie on a golden pillow –mais bien sûr! Actually Rhubarb doesn’t know any french…but she does know how to spell, “Walk!” 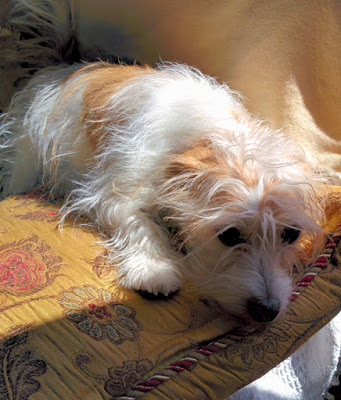 She really is a sweet little thing!