I can’t decide if it is cliche or a meme, but springtime in Paris is most definitely a thang! For the first time since we arrived, I’ve been able to wander around outside without my coat on. Obviously, I didn’t think it was as warm as this gal did! 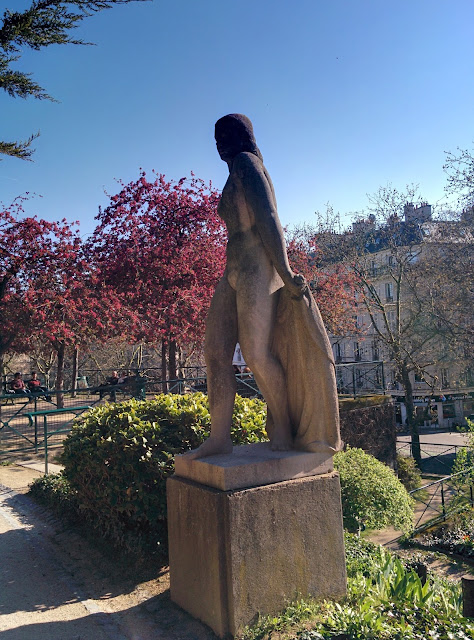 We first arrived in October, plunging from hot Californian temperatures in the 30’s (Celsius) to the brrrrr of 10C, with rain and wind, in Paris. The sky went from permanently cobalt to a kaleidoscope of  grey, white, and blue. And then it got colder still, such that the temperature took on a personality of its own, like having having someone unpleasant around who you just had to rub along with anyway.

This week that unpleasant person left the building – or the city – to be exact!

On Sunday, we decided to explore Le Promenade Planée, a walk along an old railway line that ran from the Bastille to Vincennes. I’ve also heard it called “la Coulée verte” and I’m not sure which is correct. Either way – It’s been landscaped as a park, and I’d been dying to check it since I came across it on a blog called “Cool Stuff in Paris.” I mean, if ya’d just moved to Paris sure ye’d be mad not to read a blog with a name like that, wouldn’t you? It’s directions were spot on and we didn’t even get lost!

We took the metro to the Bastille and exited onto Rue de Lyon. I had a chuckle at this place. 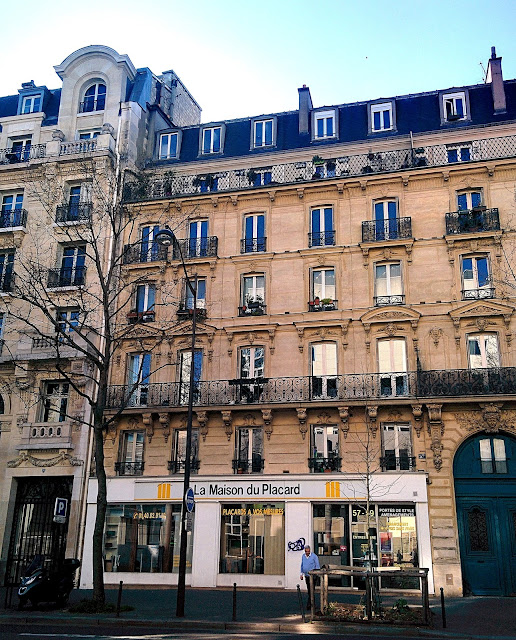 You see, the Bastille is a place where many protests and demonstrations or manifestations take place. How handy is it pick up your placard just 100 meters from the Bastille? It says something about a place that the postal service is complicated and confusing, the rail service a complete mystery, but if you want to protest, you’ve practically got a convenient one stop shop!

Okay – I gotta interrupt myself here to set the record straight – I was at my French lesson the day after I posted this blog post and we were having a conversation about the imperative tense, and I said something along the line of, “Oh yeah, don’t you use that on advertisements and placards and such?”

“Oui,” she said and then told me the French word for  advertisement which I repeated. Then she said,”But the word placard in French does not mean placard.”

“It means cupboard in English.”

Noooooooooooooooo! I had to confess to her about this post (well just the section above) and she had a good laugh.

“Can you imagine taking a placard to a manifestation?”  I said.

“If you got a big enough one you could hide in it, if there was any trouble!” she added. 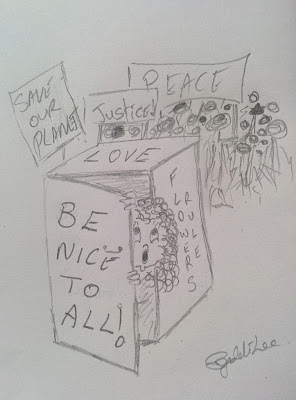 “But really,” my teacher said, “any French people reading your blog…” She stopped and wrote out a phrase in my notes – ils vont être morts de rire – they are going to die laughing!

By this stage I was laughing too – well, where would I be if I couldn’t laugh at myself? I’m okay with being laughed at …when I deserve it!

Before too long we saw what we were looking for. 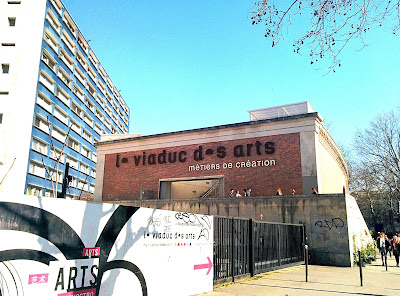 We climbed up the steps and absorbed the beauty of nature as it blossomed around us. 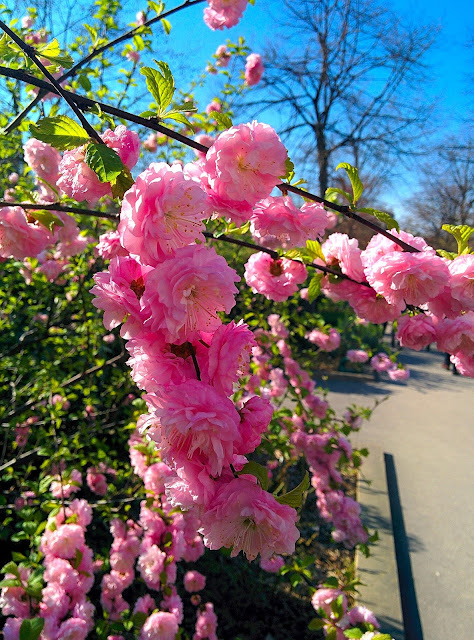 Some late bloomers  were poised right on the edge… 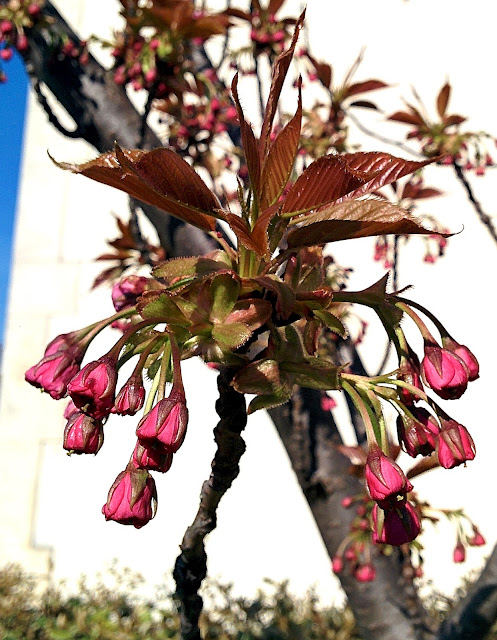 And this yellow blossom seemed to trap the very sunlight itself (as a biologist I must point out, that mostly, only the green parts of plants actually really capture the light!) 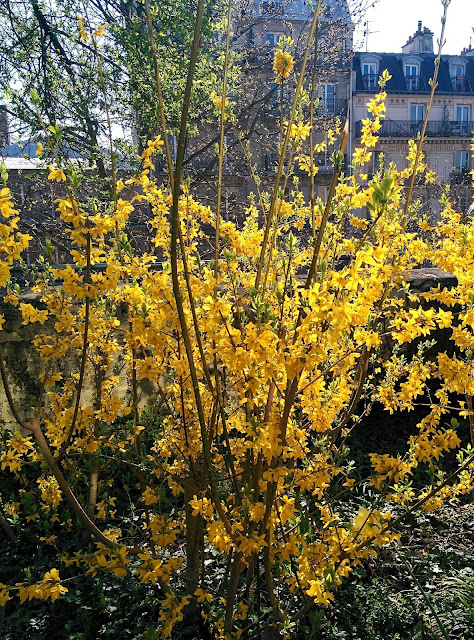 There was even water fountains along the way. 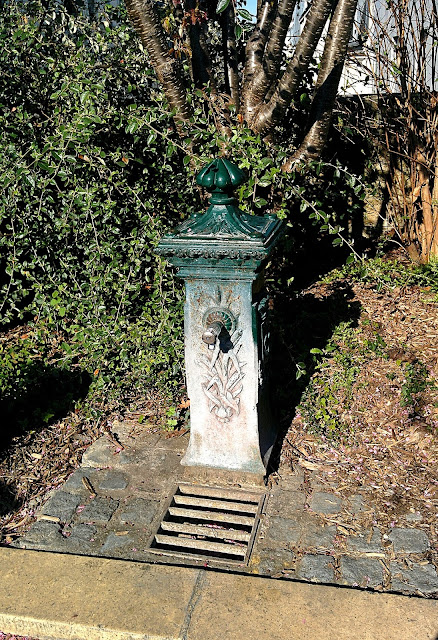 And daffodils – all different varieties – but these were my favorite. 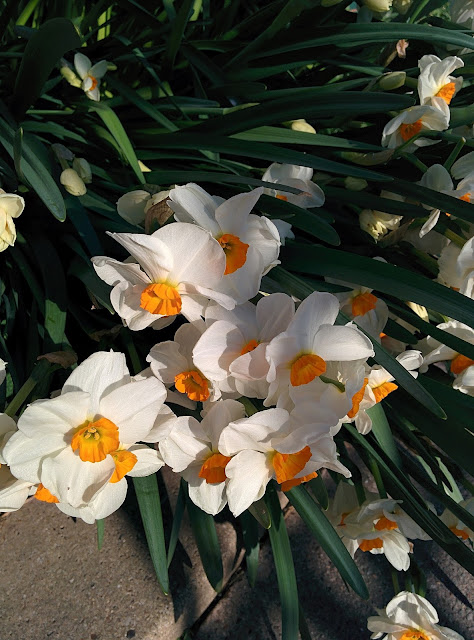 We walked high above other streets, and I loved how this one had all its trees in full bloom. 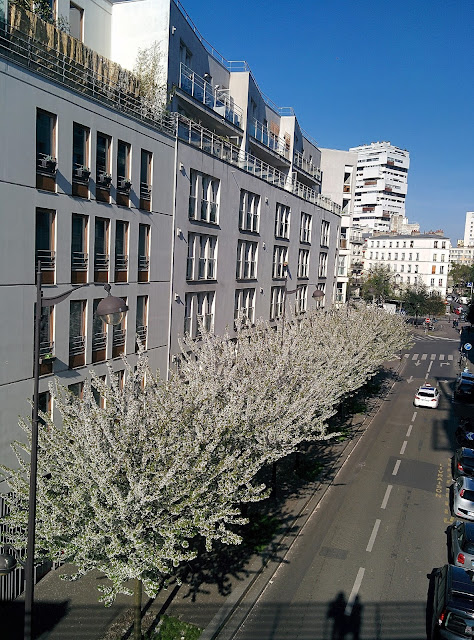 The afternoon sun made it a challenge to get these pictures but did produce some interesting lighting effects, I think. 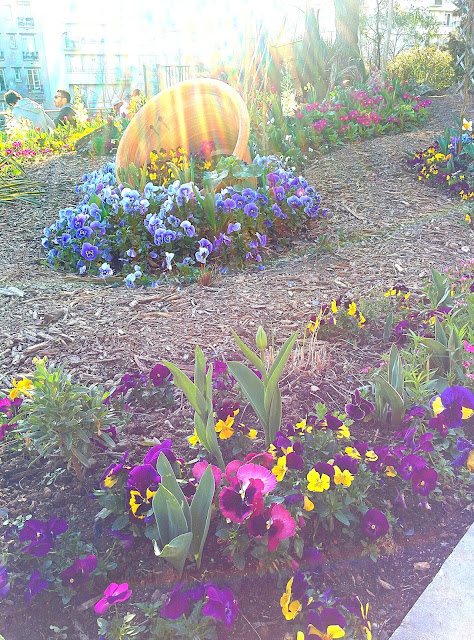 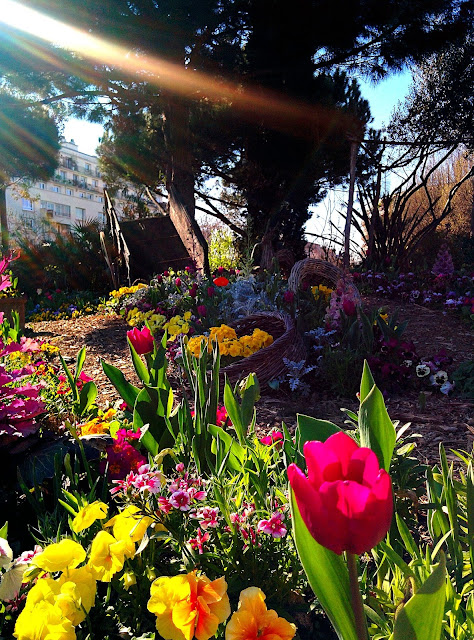 I fought the temptation to show a gazillion more flowers from this walk, preferring instead to add to this post photos that I took later in the week as I walked home from my french lesson in the 13th arrondisment, (South Paris). It has been a glorious week weather wise. So yep, less cleaning more street art had a certain ring to it! 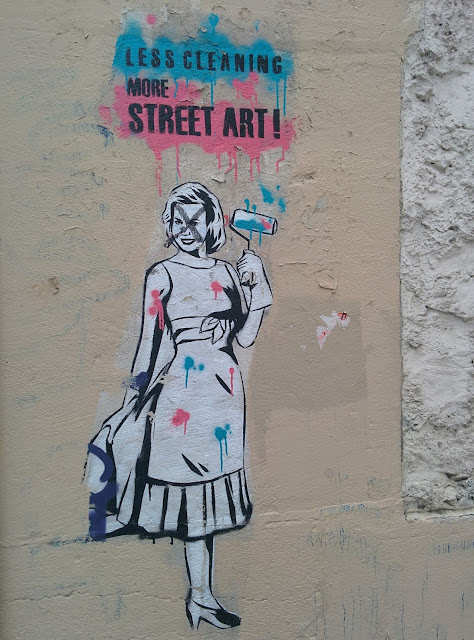 I love this picture of the old lady walking through archways of flowers. 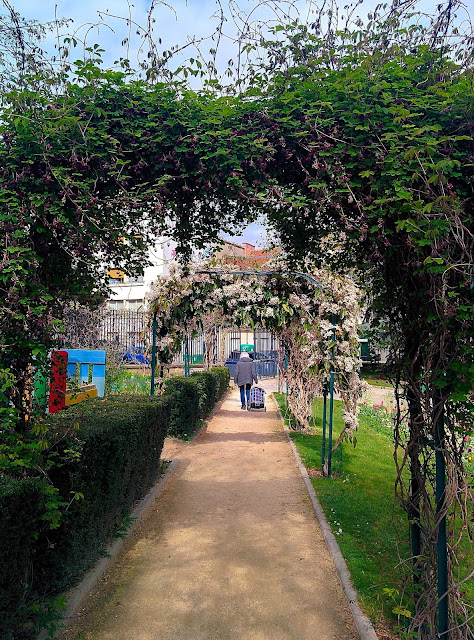 And oh my, the smell of the clematis. Hmmmmm! And the birdsong – pure audible joy! 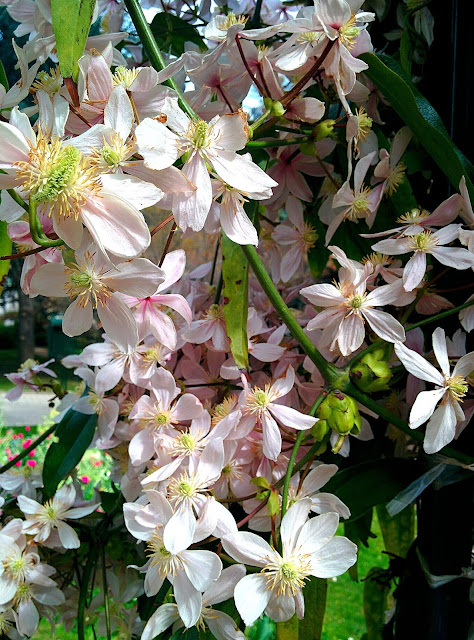 More street art – brightening up the rainy days when they do come. 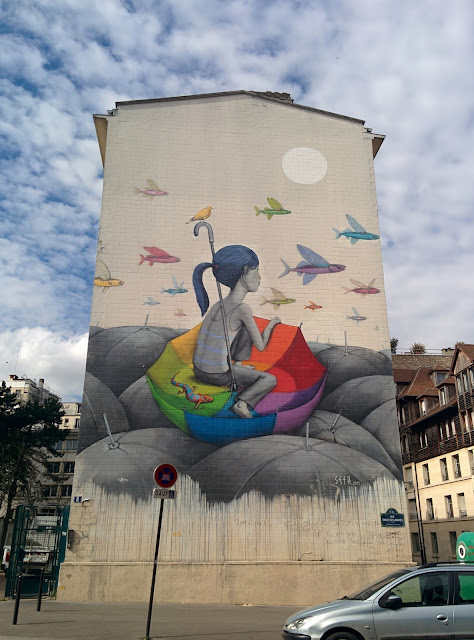 I loved how on one side of the street, there was an old chateau, centuries old. 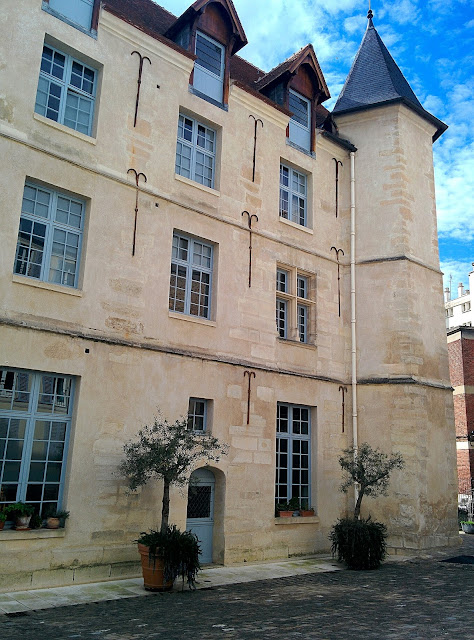 And this directly across the road! 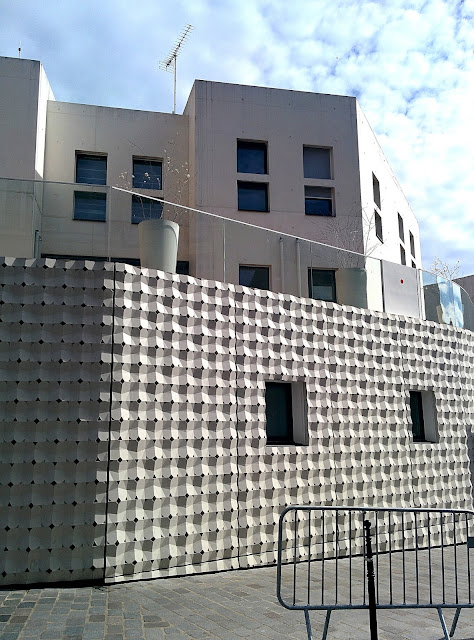 I was just thinking about how in years to come, would people be taking pictures of this quaint old building. Would modern art – when less modern – be as attractive to the people of the future as the old chateau is to me now?

That very same sentiment is echoed in a fellow bloggers post a French Frye in Paris. Have a look at how he saw Paris this week (and other weeks – I highly recommend this blog) The photos are absolutely gorgeous. And if you’re in Paris, his tours are amazing. I’ve been on one and it was a fascinating insight into the city. I certainly planning on attending more!

I hope Spring has sprung just as beautifully for the rest of my fellow northern hemispherers!

2 replies to Springtime In Paris