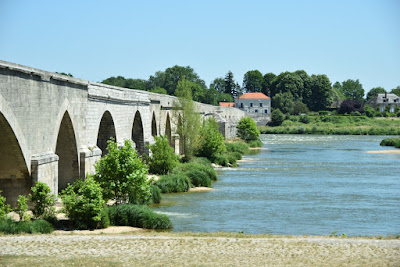 Right on the banks of the Loire River, Beaugency is a bustling little town on a Sunday afternoon, or at least, it was on the Sunday afternoon we arrived to view the Chateau de Beaugency. There was a town-wide jumble sale. 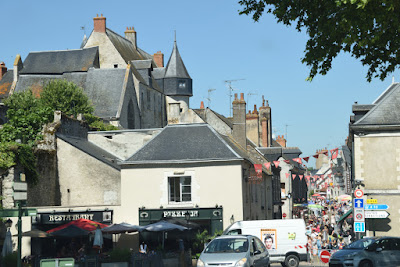 Everyone must have cleared out their attics (Maybe it was laundry day and they needed room to dry the laundry) and put it out for sale – The flea market easily covered four or five streets of the little town. If you love flea markets this is the place to be… 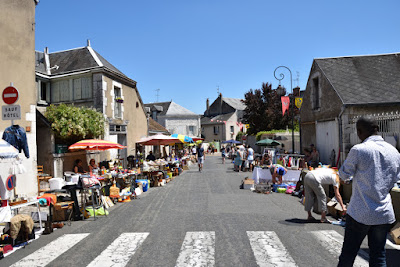 Unfortunately I abhor them. The thought of holding on to my own junk, never mind buying someone else’s, makes me shudder!

Fortunately, I love castles and this place had a massive one right in the center of town. This was another of my heroine, Joan of Arc’s hangouts. You go girl! 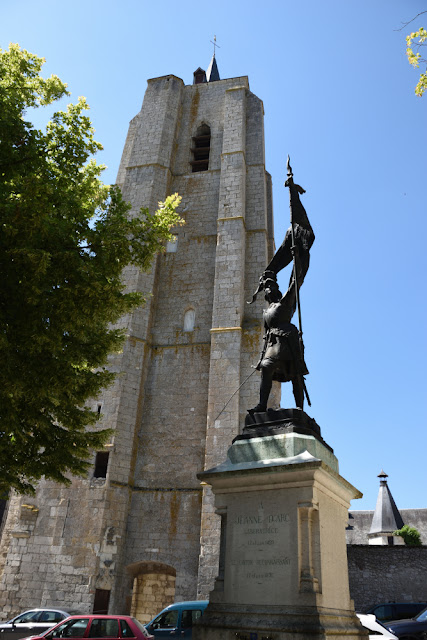 This castle was all teched up – with your entrance ticket you received a tablet that guided you through the castle. 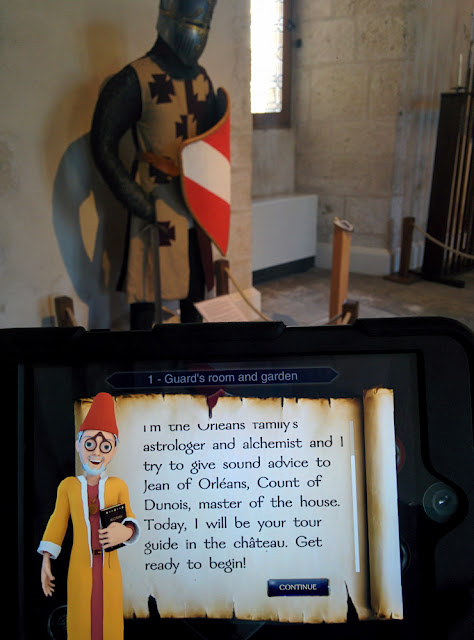 Again, here’s another castle where you could walk around in all by yourself due to the lack of tourists…always a great thing! 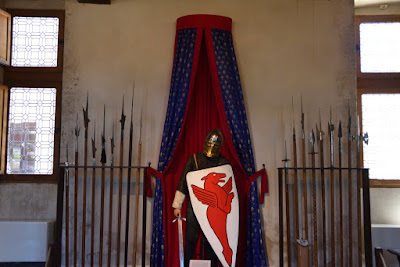 The solitude made the suits of armour that little bit more real, more creepy, and the one of the horse was particularly good. 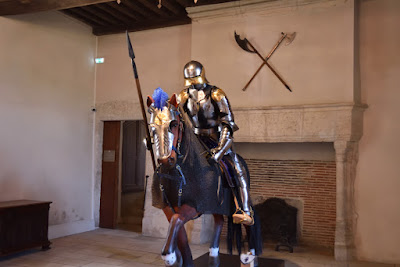 The mock up of the various rooms was really interesting. 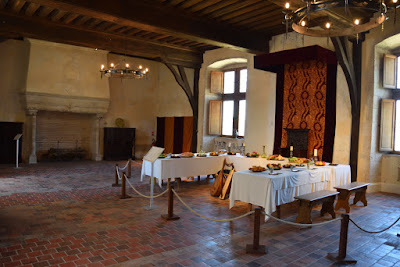 Everything had that “Game of Thrones” feel to it. 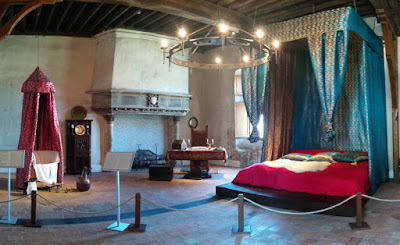 We explored all the way to the top of the highest tower. 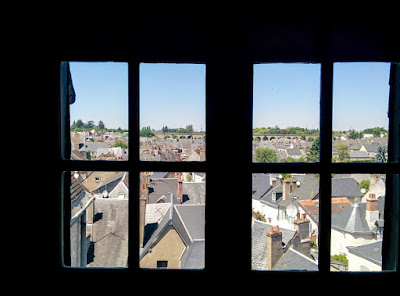 Enjoying the view of this medieval town from the window. 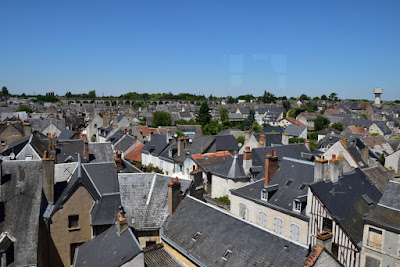 We had to return the hire car to Orly Airport by 7pm so it was time to head northwards. I spotted another couple of castles along the route in google maps (swinging a little west of the direct route but do-able) so we decided to max-out our castle experience and try to see those too.

The first one was Chateau de Chateaudun, but upon arrival we discovered that the castle was closed because they were having a theatre production in the grounds (which we had neither the time nor the inclination for.) But the nice lady at the gate let me take a couple of pictures 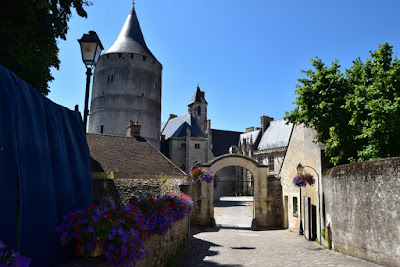 And I helped myself to one over the wall too 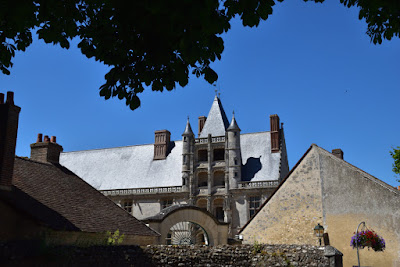 The zoom lens came in handy. 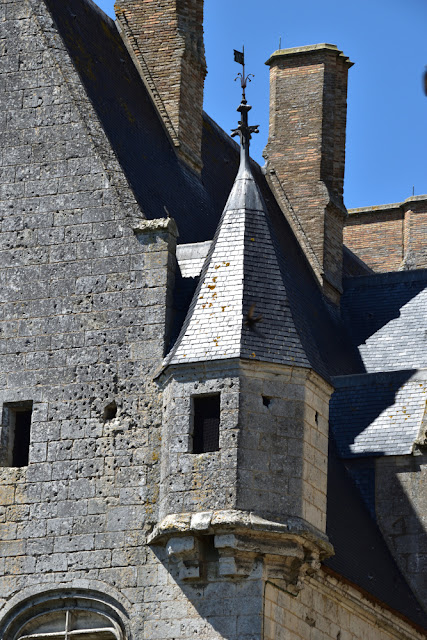 We were back on the road again, leaving Chateaudun as Chateau-not-dun! 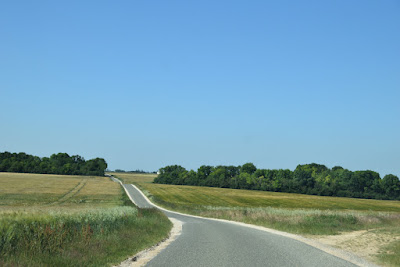 By this stage, we were really off the beaten track – usually a place we like to be, but for being within fifty miles of Paris, this area felt incredibly remote. It was as if the big city had sucked all commerce up and left a vaccum. There was nothing open in any of the tiny villages and no petrol stations at all – more a problem due to my needing to pee than us needing petrol. Still, we were fairly sure that we could remedy that at our next stop – Chateau de Baronville.

As we followed the route on google maps, the roads became smaller at every intersection until were were driving along something that you’d find in a Grimms fairytale! 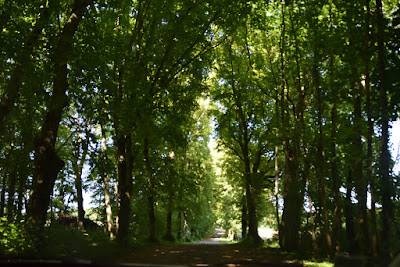 There were signposts for Castle Baronville, but as we closed in very confusing signs told us we were on private property. It felt like such a contradiction to have both, and we pressed on, not least because my bladder was pressing on too!

But the gates to the castle had a massive private sign – one that could not be argued with. So I as talked my urge to pee off the ledge, we turned the car but decided to continue up the tiny lane in the hopes that I’d find a suitable gap…

Suddenly, My Husband swore and said, “I’m not going to be able to stop now, there’s a guy right up my arse.”

I turned to look and sure enough the car behind seemed in a huge hurry. I could almost see the driver’s nose-hair, he was that close.

“Maybe we should pull over to let him past,” I said, forgetting the bladder situation for the moment.

“There’s a junction ahead. Maybe he’ll go a different way, maybe the road’s bigger and he can pass us.”

We turned right onto a main road, and the car behind us… it did a U-turn!!

Then the penny dropped – they had been “escorting” us off their private land. We were completely freaked out by this and decided to head straight back to Orly and get our asses back to Paris ASAP!

In all my travels I can’t remember being so creeped out in a remote area (except maybe for the time in Northern India when we wandered into an area that had old land mines in it. Although we didn’t know there was land mines until afterwards and thankfully hadn’t set any off. Everyone was okay but thoroughly spooked out!)The whole feel of these wee towns was weird and unwelcoming.

It was with great relief that we arrived in Orly and handed back the car. No relief, however, when we got home to a city baking in 35°C. Back to putting the towels in the freezer. Oh, the joys of living in Paris in the summer!