Since the moment we moved in, I’ve been itching to go up the Tour Saint-Jacques, a Gothic tower near our apartment. 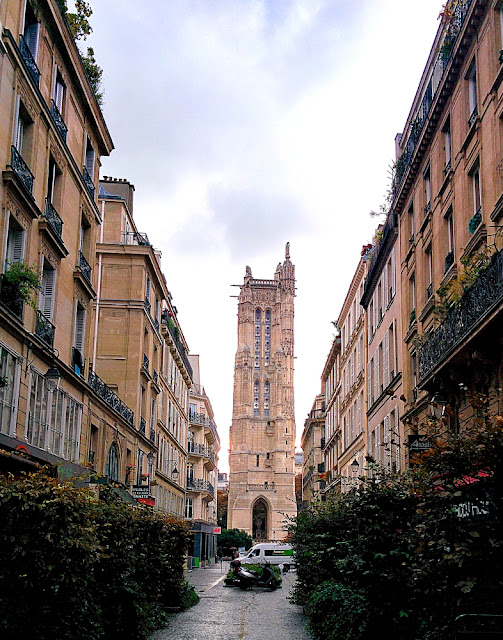 I knew back in October that I would have to wait at least until the spring since you can only go into it on a guided tour and there were none scheduled during the winter. I always liked walking through its little park, or if the park was closed like it is at night, alongside the fence so I could see the plants and the greenery within.

One evening in November, walking home after a writing group meeting, I took the route along the railings on the eastern side of the park. Ahead, out of the corner of my eye, I saw what I thought to be a flock of pigeons scavenging a bag of French fries (well, of course, they’re French fries – I am in Paris!) As I drew closer, I realized they were not pigeons at all but lovely plump, happily feeding rats! About a dozen, maybe more, some sat up on their hind legs and chowed on their grub, like baldy-tailed squirrels!

I stood mesmerized – I’m not particularly phased by rats; wouldn’t want them attacking me, but then wouldn’t want even the cutest of cuddly animals attacking me either. I speak from a position of experience having suffered the trauma of a bunny rabbit attack in Australia. The short version of the story: Cute family-pet bunny on a leash in the backyard hopped over and sank its buck-teeth into my ankle as I innocently stood on its lawn minding my own beeswax! It actually drew blood, but I digress…

Back to the Parisian rats and their very French fries…

I toyed with the idea of taking some photos, but there was a man watching me from the doorway of a nearby restaurant and I figured I’d look like a right weirdo if I went all David Attenborough with the mischief of rats. (What a great collective noun!) I stood for a second more thinking about how a few months ago I had been watching “proper” wildlife in California, listening to the coyotes call at night, hearing the gurgle of the wild turkeys from the hills if the breeze was just right and even skipping out of the way at the hissing jangle of a disgruntled rattle snake after a grass fire in the nearby hills. And now here I was, watching a mischief of Parisian rats snack on French fries.

Before I left the scene, I gave the man watching me a nod and a shrug, which he returned. In Paris that’s as good as a full-on conversation – “Did you see?” “Sure.” “Wow!” “Well, what can you do?” “Nothing, I guess!”

But I guessed wrong.

A few days later, the gates to the park were locked, bamboo screening erected all the way along the fence and a sign posted. The words “Dératisation” jumped out at me. I didn’t need google translate to figure out what that meant!

So that was back in November. The park and access to the Tour Saint-Jacques remained closed all through the winter, spring and into the summer.

It wasn’t until July that we noticed the park had reopened and the tours of the Tour Saint-Jaques were back on – happily in time for My Sister and Nephew’s visit. 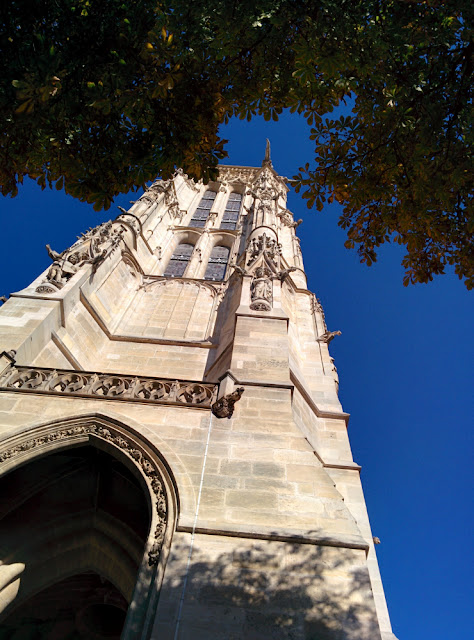 The 50-minute tours leave every hour from 10 am to 5 pm on Fridays, Saturdays and Sundays, and sell out quickly. We had to go down in person to get the day we wanted. No problem there since it’s practically on the doorstep. You can book a Friday visit in advance through this website. 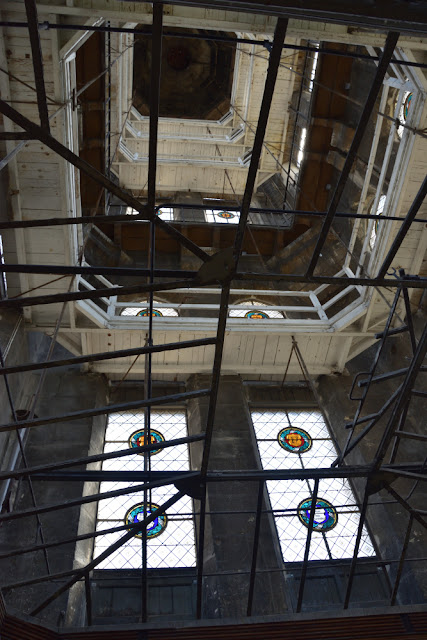 Unfortunately, the tours are only in French, so there was a bit of waiting around inside the tower looking up at the ceiling – which was pretty amazing – with me grappling to understand the tour guide then whispering the key points to My Husband, Sister and Nephews – Facts such as the tower is all that is left of the Eglise Saint-Jacques-de-la-Boucherie, the rest of which was destroyed during the French revolution.

In all honesty, I got most of my information, not from the French tour guide, but from good ole Wikipedia!

So that part of the tour was a bust for us English speakers, but we got to climb the 300 steps to the very top, and oh boy, was the view worth it. 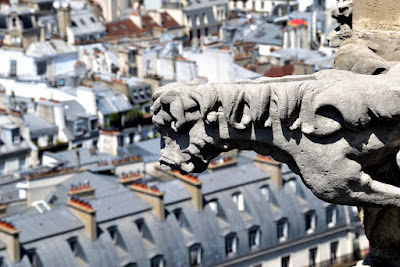 If you only had one day in Paris, go here. You get to see everything from this central high-point! It’s better than the Montparnasse Tower because you are closer to most of the major sights, like the Eiffel Tower… 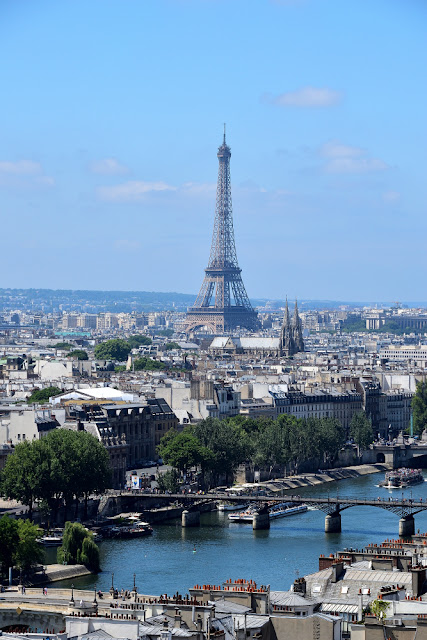 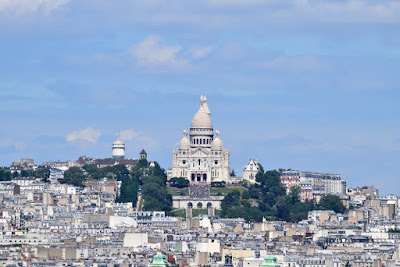 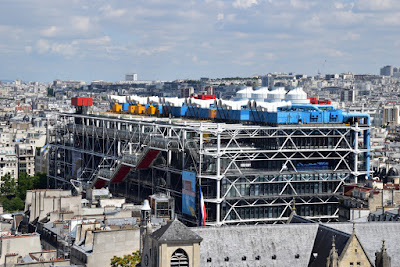 Our apartment – okay so it’s technically not a major sight, but we got excited. Hard to pick out, it’s in the middle of the picture. However, you can easily see our favourite ice-cream shop, N2, where they make ice-cream right in front of you using liquid nitrogen! It’s under the black awning at the end of the street with the red awnings in the foreground of the picture below. 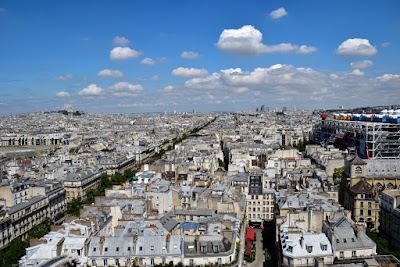 There’s a great view of the Conciergerie, nicknamed the Disney Prison by visiting friends because it used to be a prison – Maire Antoinette was held there before she was executed – and it looks like something from Disney. 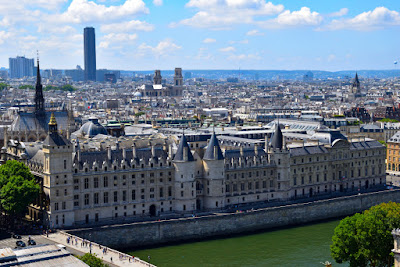 We’ve speculated over many a glass of wine as to which Disney characters should be incarcerated there. When Cruella de Ville was suggested, my friends wondered did she own the Hotel de Ville? 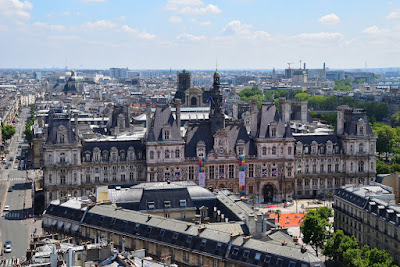 There’s a birdseye view of the rooftop bar, Le Perchoir, above the BHV Marais. 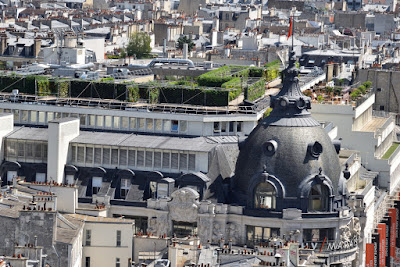 The Panthéon sits proudly in The Latin Quarter across the river from us. 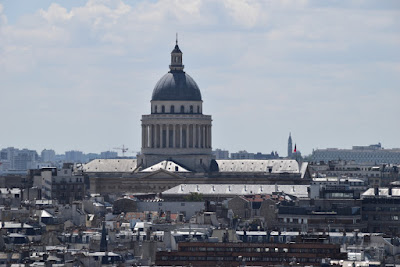 In the distance, the golden roof of Les Invalides glints in the sunshine. 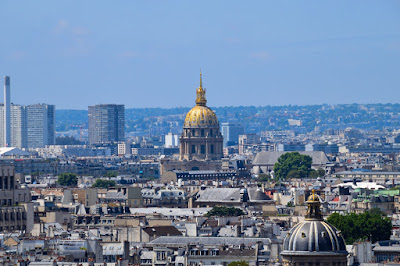 Montparnasse tower looms over everything including the spires of Saint Sulpice. 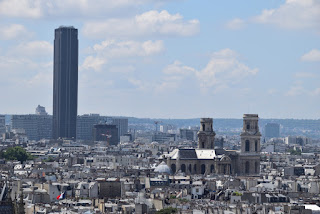