We call our GPS system “Jane”. When my husband introduced me to Jane, I wasn’t happy. I like using maps. The huge Atlas in my father’s study was a wish book to me as a child. I’d flick through the pages, dreaming of visiting those far off lands. Maps give me a sense of where I am in the larger scheme of things, and they help me learn my way around.

“Why this voice?” I asked my husband, who had chosen it from a library of voices, “What about Brad, the surf dude, Aussie voice?” Or even Wolfgang, the Austrian? Though, directions in German weren’t of much use to either of us! It was a double whammy – another female and English!

“What about a nice Irish voice?” I said. It didn’t have one, probably because if you ask an Irish person for directions, they’d say stuff like, “I wouldn’t start from here, if I were you!” or “Keep going, until you see the post office, then you know you’ve gone too far…” and my favorite, which I actually heard in County Cork, “Keep going to the ‘T’ junction, then go straight on.” No matter which way I figure this one, I’m left sitting in a field – albeit one with very green grass!

Mum’s sense of direction is absolutely and unequivocally atrocious! So, we needed Jane to help navigate to the . Another bug bear with Jane is that she has no sense of sight seeing! She will choose the route that is the fastest and that uses the biggest, most popular, craziest driver filled highways. She really needs a “tourist setting”! And because of Jane we nearly missed Route 66!

We drove out of , southbound on highway 93 and very soon came upon Hoover Dam. There are a variety of tours to the Grand Canyon from , by land or air. Those by land always advertise that they include a tour to the Hoover Dam. You have to go that way anyway; it’s not really an extra trip, so you are not necessarily getting extra bang for your buck. It is an interesting stop, though the traffic moves so slowly over the dam right now that you will see enough of it without even having to get out of your car. There are road works there at the moment, and it looks as though they are building a humongous bridge to by-pass the dam.

After this it speeds up again. Mum, the ever cautious passenger, kept telling me to slow down. She didn’t swallow my line that the highway marker was the speed limit – we were on highway 93! We picked up Interstate 40, speed limit here was 75 mph, and headed east.

The was still two hours away. I was getting sleepy, so we decided to take a pit stop at the next exit. We followed the food signs to a little town called Seligman and suddenly discovered that we were on Route 66. I was puzzled. Was this THE Route 66? Why hadn’t it been mentioned in any of the research I’d done on getting to the ? Probably no profit to be made for the big corporations from folks travelling along it. And Jane – why hadn’t she thrown it up as an option?

At the junction was a host of signs, advertising various places to eat. And then we saw the place where I just knew I had to eat – The Roadkill Cafe – Their motto “You kill it, we grill it”! It has a cute row of Western store fronts on site and lots of photo opportunities. 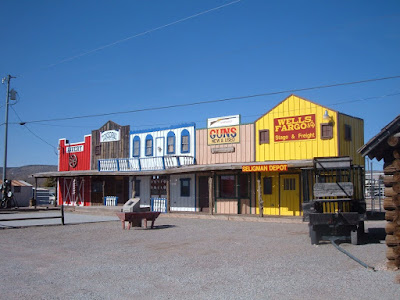 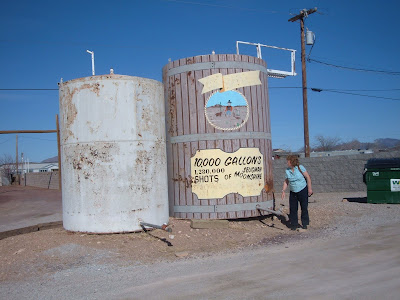 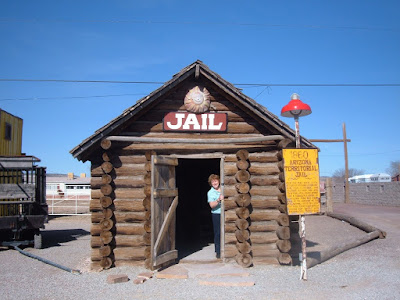 Like I said, Mum’s sense of direction is really terrible – she is supposed to be pointing to the sign above the cafe! 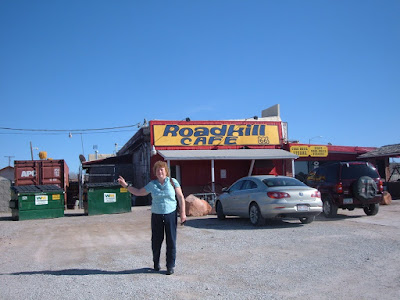 The menu is rib-tickling, if not appetizing. You can savour such delicious delights as ‘One Eyed Dog “Hit in the fog”’ or the “Smatter Platter”! 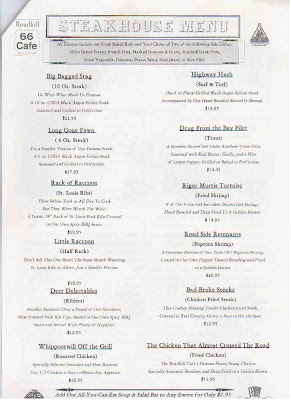 The town claimed to be the birthplace of Route 66, though logically wouldn’t that be either at one end of it or the other – not somewhere in the middle, or even west of middle? The friendly Roadkill staff, (that sounds all wrong!) told me that Route 66 either runs parallel to I40, or merges with it. So, we decided that we would follow it after we’d finished our yummy pies – vegetarian ergo no road kill.

We returned to along Route 66 on our way home a few days later too. Not another car in sight as far forward as we could see up the dead straight road to the horizon, nor back behind us to that horizon. A total movie moment! 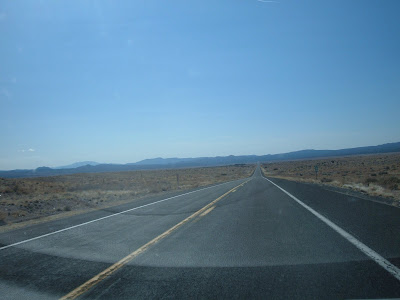 Before we left the Roadkill Café, I happened to get lost on the way to the restrooms and ended up in the bar. Seriously, stuff like that always happens to me! (Blink, blink!) The bar part is called the OK Saloon. I was standing there looking at the heads of the various stuffed animals and asked the barman, Art, if that was a real buffalo. 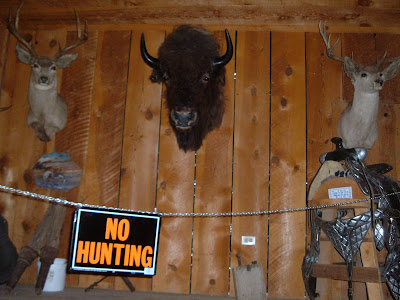 “Sure, it’s real,” he said, paused, then added “Real dead.” And he didn’t even crack a smile. That was okay, as I was laughing enough for both of us. Art is a real character – he kept us entertained, telling us the story behind all the dollar bills with names on them, attached to the walls and ceiling of the bar. Apparently, way back in the day, the cowboys only got paid once a month, and they’d write their name on a dollar and pin it to the bar, so that when they got back from driving cattle, possibly with all their wages spent (though I wondered where they’d spend it?) they’d at least have money for beer, though as Art pointed out –“It’s no good now cos a dollar don’t get ya nothin’!” 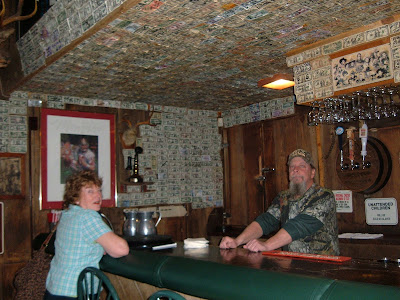 When I asked Art if it was okay to post his picture in my blog he said, “Sure, just don’t let those people in the post office or the FBI see it.” He rated highly on my grinometer!

It’s a 5 hour trip – with no stops – to the . Last time I did it, four of us hired a car between us from Las Vegas, drove the five hours, reached the canyon just before sunset, got out had a look, got back in the car after half an hour and drove all the way back to Las Vegas. Whilst it beats never seeing it, there are better ways to view the .

Initially, I researched staying in the , which is inside the . We are talking about a hole in the ground here, a huge one, but still a hole, so unless you are right on the edge of it, you don’t have a view of it. Twenty meters from the hole and you can’t see it. It’s not like Ayre’s Rock, which you can see from more than 40 miles out, so it’s extremely expensive to get a room with a view of the . The Bright Angel Lodge and Cabins start at $142 fro a cabin on the rim, but these had no availability for our dates – mid week, mid winter! The cheapest I could get was a $248 room, not even on the rim. You need to book really far in advance to get the best value for money. Even with that big price tag, the rooms are basic, according to the general gist of Trip Advisor. Stay in the National Park only if you don’t mind paying big prices for low standard accommodation.

Two miles from the gates of the park there is a small village called Tuyusan. It seems to be mostly of a collection of hotels from the usual big hotel groups. We stayed in the very comfortable Holiday Inn Express for $69 per room per night, and breakfast was included each morning. There were coffee making facilities in the room, as well as a fridge and a microwave. It was a 15 minute trip to the Grand Canyon each day. You paid an entrance fee of $25 dollars for one car and all its passengers, good for one week and for all entrances. This was good to know because when I initially spoke on the phone to a person about staying at BrightAngel cabins, she omitted to tell me that the park fee was good for a week. The way she told it, staying within the park – at the cost of $248 per room per night was better as I wouldn’t have to pay into the park each day! Very misleading information, and whilst I know the tourist industry is struggling in this economy, this is almost fraudulent. I’ll give that our accents may have confused each other. I did ring back a day later, and another nice chap gave me the correct information.

The Canyon is spectacular. “Grand” doesn’t quite cut it. It should have been called the “”. Words can’t describe it, and pictures rarely do it justice! There was about a foot of snow at the top. Further down into the Canyon it gets warmer, so the snow doesn’t go all the way in. I loved the snowy vistas. 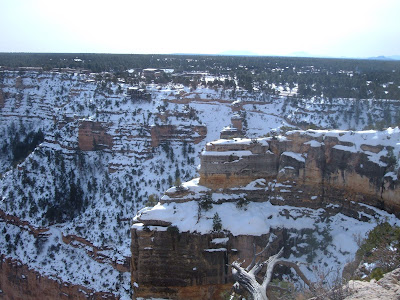 If you do one thing when you go to the it should be… apart from stopping at the Roadkill Cafe ….the helicopter ride!

It was amazing, and so gentle. We went with Papillon on the Eco-Star Grand Canyon Helicopter Tour. The flight was smooth, much more so than the single engine Cessna that my husband has taken me flying in. Mum and I had a great view from the front seat, with the headphones pumping in a great soundtrack, which stirred my emotions to the extent that I felt as though I might cry as we dipped over the rim! I felt so lucky to get the chance to do this, and was delighted that Mum could experience it too.

Next time I go, I will hike it. As I gazed at it from the ground later, I just wanted to go down into it, treacherous and all as the snow made it look. 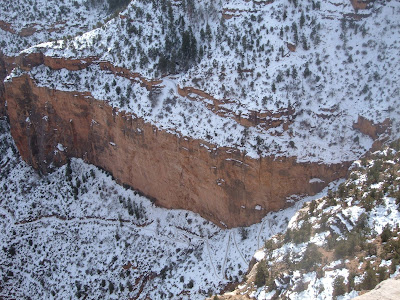 I like to leave something to come back for, just as I did the last time. I’ll finish with an excerpt from what I wrote about the in May 2004 and a slide-show from February 2010.

“And the itself – Absolutely Unbelievable!!! We were driving to a vantage point and thought we would see it from a distance when through the roadside bushes we saw this almighty hole in the planet. We gasped – awestruck, and Baz pulled over, and we all got out and walked to the edge. To think a river did this!!! And all it took was lots of time – I saw it as a testament to perseverance – time and patience can do anything, and I was humbled at how the could, over millions of years, carve this out. A tribute to the grace of God and Nature! And yet, 4 hours down the road was a monster of a tribute to humanity’s lack of grace – what a contrast! We could have sat and watched the changing colours all day but were beat back to the car often to warm up, as it was surprisingly cold! It even snowed a little!”

1 reply to Route 66, Roadkill and The Grand Canyon!