In my efforts to research native Irish vegetables, I found it impossible to get past the potato. The problem is that potatoes are not native to Ireland at all, having only been introduced to Ireland in the 1580’s.

Originally potatoes came from Peru. Laura Stadley from “Whats cooking America” has a very interesting article on the history of the potato. I was particularly tickled by her reference to an Irish legend that told of potatoes coming from the shipwrecked Spanish Armanda. However, most historians agree that Sir Walter Raleigh introduced the potato to that part of the world.

Potatoes were easy to grow and the Irish embraced the little white tubers, slathering them with butter and salt, turning them into a veritable feast. They became completely dependent on them which is why when the potato blight hit in the mid 1840’s they had nothing else to eat and the country quickly spiraled into famine. Over a million people died and many more fled to the new world. The population of Ireland shrank from 10 million to 3 million in that decade.Even now the population of Ireland is still only 6.4 million.
I still panic if my spuds aren’t doing well, but I do plant other crops, and well, if they fail there is always a Safeway’s up the road. I have great respect for the billions of people on our planet to whom the failure of their crops can be a life threatening event.
Growing your own potatoes
You can buy seed potatoes at most good nurseries or you can plant potatoes that you get at the grocery store and that have sprouted shoots. These grow equally as well as the seed potatoes, but the seed potatoes will have less risk of carrying disease. I haven’t had any disease on my potatoes and I use both.

Potatoes are very frost tender so plant after danger of frost.

I plant my potatoes in a trough that is about 6 inches deep. When I fill in the soil I heap it up into a drill that means the potato is under about 8-10 inches of soil.  If I’m burying my potatoes in a pot or a grow bag I will usually only plant them about 4 inches deep and then add soil to them as they grow. This is called “hilling up.” I have found both ways work equally well. The bottom line is that you want a long stem under ground. Potatoes are not roots, but are tubers that have grown from the stem.

Whilst under the soil they remain white (blanched), but if they have sunlight on them they will turn green and this causes a build up of poisonous alkaloids. Green potatoes should not be eaten. Remember that the potato is a member of the deadly nightshade family. The only part of it that is NOT poisonous is the potato tuber. Never eat any of the rest of the plant.

It takes a while (up to six weeks) for the potatoes to emerge – especially the deep planted ones. 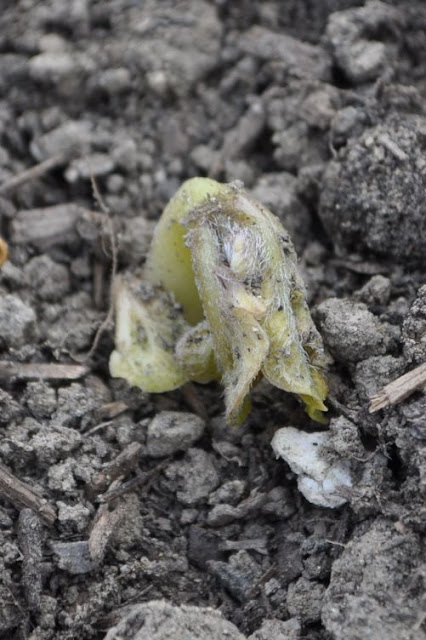 Once they unfurl they are like green roses against the soil. 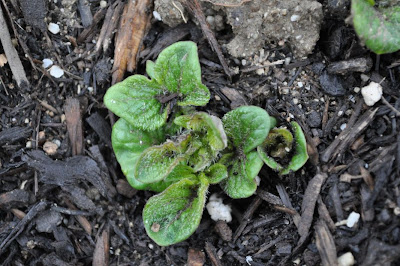 They need plenty of fertilizer,cow manure being one of their favorites! They like lots of water, though I do have a volunteer potato in the far flung reaches of my yard that has received no additional water. I’m surprised it has survived this drought-winter we’ve been having. 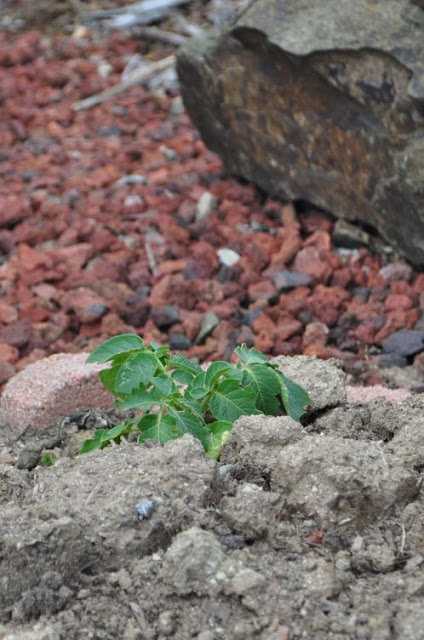 Well, when I say drought , I mean until this week! Although the rest of the Bay Area has had a nice thorough soaking, we seem to be in a rain-shadow and the moisture in the air has not even wet the ground. However, the cloudy skies have tricked the spuds into thinking they are in Ireland, and they are loving it! 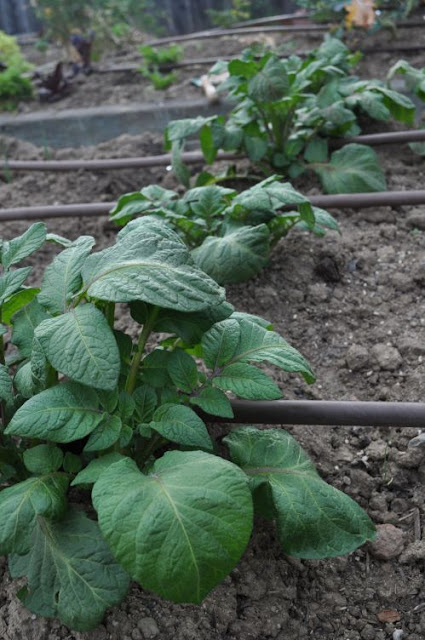 One thing that potatoes have in common with the Irish is that they get absolutely everywhere. If you have planted potatoes at all in the past, you will find them popping up everywhere. I like to think of volunteer potatoes as growing menu choices!
Here we have champ growing – potatoes in the scallion bed – just add butter and salt. 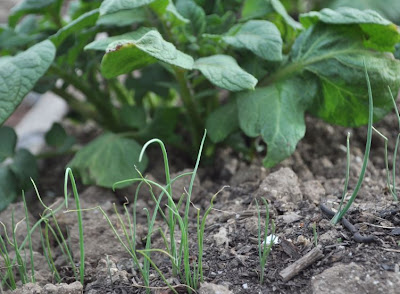 And who’s for garlic potatoes? 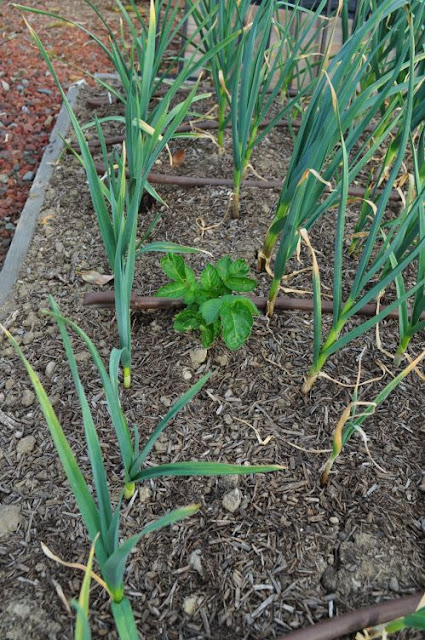 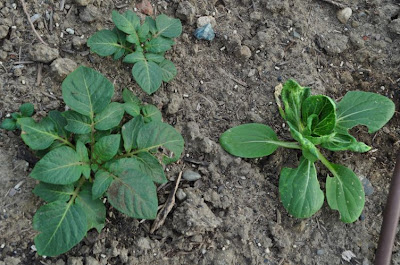 The leaves on this potato look a little different, a night shade for sure, but could it be a volunteer potato leaf tomato? It is extra pointy and a slightly lighter shade of green. Time will tell – in the meantime I’ll keep eating the chard! 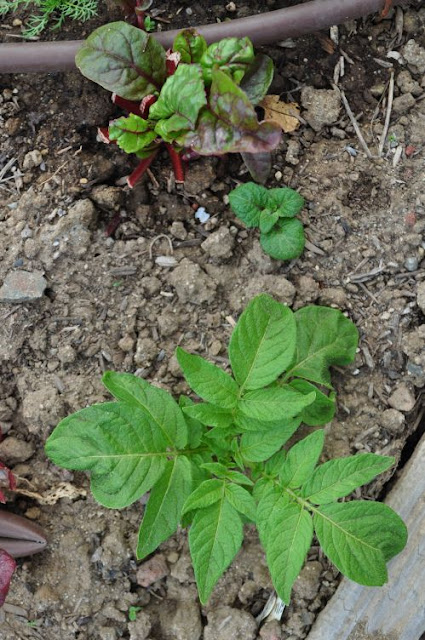 The other members of the deadly nightshade family have started to germinate. 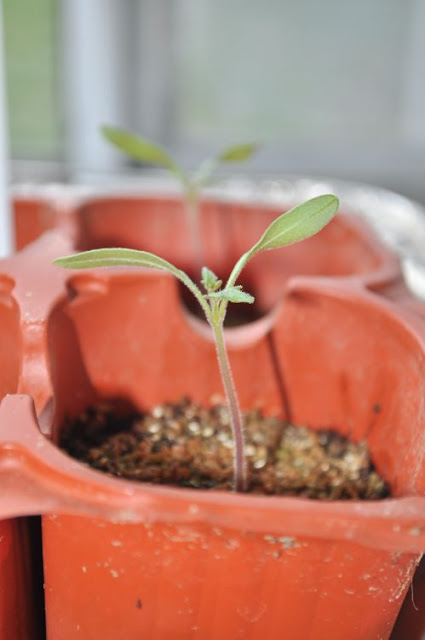 Above and below are tomatoes 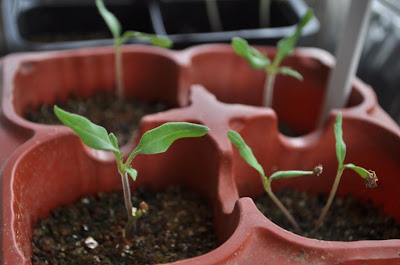 And a pepper – I don’t use heat mats, but these guys do get babied and even get to sleep in our bedroom! 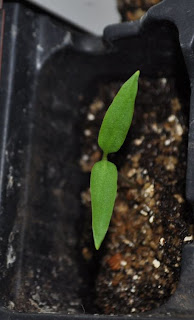 In previous years I’ve posted about the man himself, St Patrick, and the shamrock  in case you were interested, seeing as it is the season!
Wishing my readers a Happy St Patricks Day – have fun drowning your shamrock!

Filed Under : growing your own potatoes, potato famine

2 replies to A Piece on Potatoes for St Patricks Day