It wasn’t until I’d undertaken to put in a drip system by myself that I realized how easy it could be. I’d always been frighten off by the talk of valves, pressure regulator, PSIs and GPHs. And what on earth is a “faucet”?

After I discovered that “faucet” was the American for “tap”, I began to calm down. You don’t need a degree in plumbing to install your own drip system, especially if you have an outside faucet/tap that any hose will attach to.

A valve simply refers to an on/off device i.e a faucet, tap or an automatic timer of some sort that will do the switching for you.

PSI is the pressure measurement, or the “push” of the water as it comes out of the tap and stands for “pounds per square inch.” Water in your taps should around 60 PSI and too high for direct connection to a drip system. But we’ll get to that.

GPH is gallons per hour. Ideally you’ll be able to figure out exactly how much water your drip system is delivering to your plants so that you don’t waste water by over watering. Though, even when I know the GPH it’s not an exact science, so I go by how the plants look, and I use my moisture meter to ensure that the soil is as damp as I want it to be.

As you may have noticed, I’m not talking in metric – these units and measurements are USA specific and so will differ in other countries. For example the taps here are 3/4 inch and the piping is 1/2 inch and the drip-piping is 1/4 inch. I don’t know what that translates to in Ireland because, well, I never needed drip irrigation there! Your local DIY store or irrigation supplier should be able to help with the details, though the principle is the same.

There are many systems on the market, and available at the big box stores, to install drip systems. I’ve been told that going to a dedicated irrigation store ensures better quality components than the same brand choice in the big box stores. I’ve ignored this good advice through sheer laziness and can happily report that the fittings I’ve used for the past three years have lived up well to the task at hand, despite the fact we have very hard water.  It is best to choose a brand and buy all its fittings and components at the same time. This prevents sizing problems when you try to put the system together.

So, you’ve located your outdoor tap. It’s a good idea to attach a double valve so that you can still attach a general use hose. This one divides the tap into two taps, but you can get ones which divide it four ways. You can also split this up further down the hose giving you water zoning options so you can set separate timers and flows to different areas of your garden. 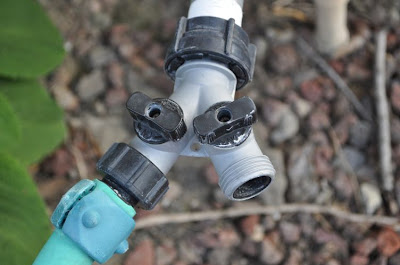 You also need to prevent the water from the drip system washing back into the tap and  back into your water line. To do this, use a backflow-preventer. Many come with a filter, and a filter is recommend if you have hard water or if your water might have particles in it that may clog the drip emitters, for example, if you are using grey water or well water.
Then you will have to decrease the water pressure to avoid breaking the emitters, decreasing the PSI to less than 30 will be sufficient for drip systems, sprinklers and misters. 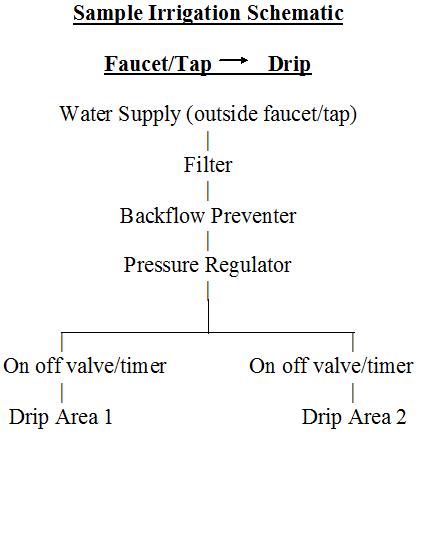 Your drip system can be inline emitter tubing for a vegetable bed. The spacing depends on the GPH the emitter delivers and the type of soil. Clay soil, with its water clinging properties, can have the tubes spaced a little further apart – 36″ for 0.5 GPH emitters, 48″ for 1 GPH emitters. You can find more information online, but use the figures as guidelines. Most soil is not exactly all clay or sand but somewhere along a scale from one extreme to the other. Remember to watch your plants and use your moisture meter to check soil dampness. It’s hard to beat gut instinct too.

My project was to supply water to my pots at the front. I’d been hand watering them for years and I was sick of hauling the hose around. It often banged against other plants and broke them. Even as I started this project, I was moving the hose out of the garden, and I snapped my white sage in two. Not happy! But it did prove that this was a very necessary project.

I used Rainmaker from Homedepot. The packaging was very helpful, providing information on all the components I needed to ensure backflow-prevention and stepping down the pressure. 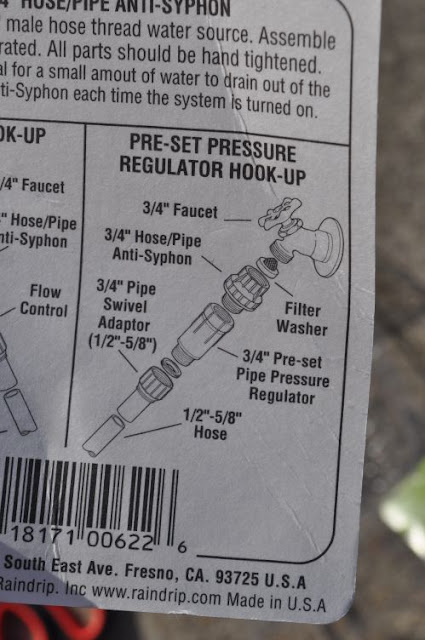 Here’s how all those diagrams translate into real life! I’ve added a hydro-port to show some of the gismos available to fine tune the system. It allows 8 tubes to come from a central hub. The flow on each one can be adapted – useful for differing sizes of containers or plants with differing water requirements. Really this stuff is just Lego for gardeners! 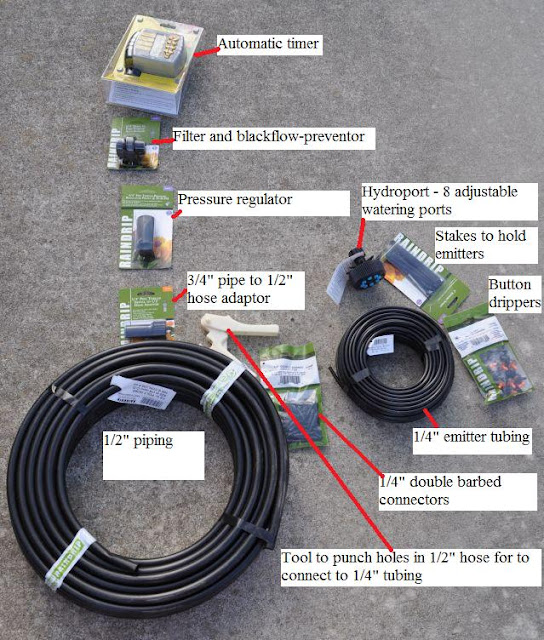 Here’s what the first four components look like joined together. I took the timer off to test the parts on the tap. 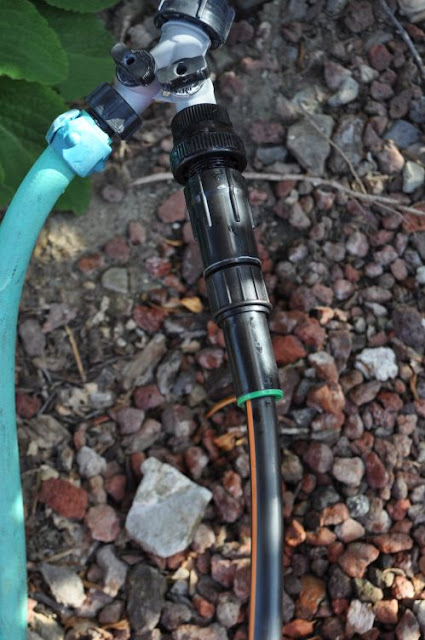 I measured out the 1/2″ pipe, cut it with scissors and used a cable-tie to seal the end. Specialized plumbing tools are not needed. 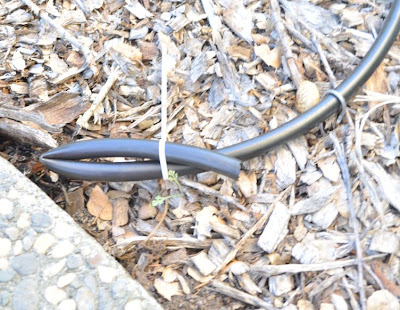 Then I used the gadget I bought in the store to punch a hole in the 1/2″ pipe. It was the only tool I had to buy and it was really helpful. After measuring the 1/4″ tubes to their required length, I fitted one end with the button emitter and the other end with a double barb to connect it to the 1/2″ pipe. 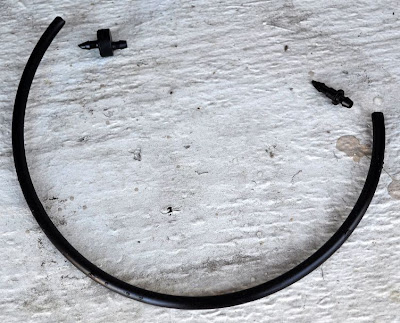 These were hard to push on to the tubing until I had a stroke of genius and put the end of the tube into hot water. 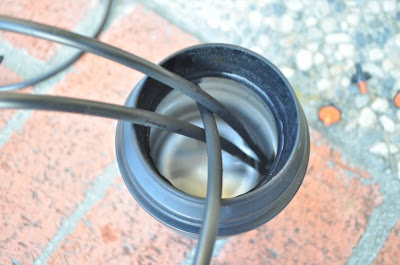 This expanded and softened the tube and the job was much easier. As soon as it cooled down it fitted snugly in place. 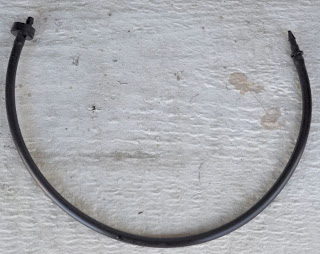 The barbed end needs to be pushed into the hole in the 1/2″pipe. It takes a little effort but is completely do-able. Be careful not to nick the pipe – like I did! Fortunately, it did not go all the way through but it is a potential weak spot. 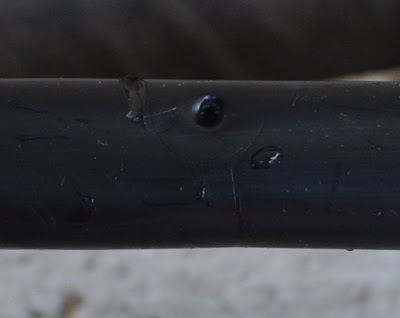 The other end with the drip emitter goes into the pot. 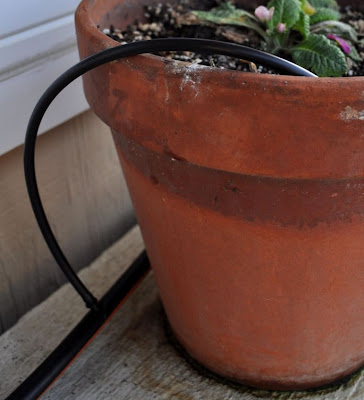 And that’s all there was to it.

As soon as I finished the sky clouded over and it rained for two days! But I’m organized now for the summer ahead…