Hardscaping is hard! It’s that part of gardening that doesn’t really involve plants or even soil. It’s hard on your hands, your back and especially your wallet.

But hardscaping is literally the back bone of the garden design – the rigid backdrop against which the plants will grow and drape themselves.

In June I began the lawn removal journey by solarizing the lawn. So far, so good – not a single weed/plant has grown back, even after that great day of rain we had last week.

I went berserk with spray paints and gave the garden furniture a makeover in July.

In August my friends helped me to build Wee Lee Canyon – a dry creek around the perimeter of the lawn.

September saw the grand hardscaping finale – the pergola and the patio.

I wanted a redwood pergola and the big box stores didn’t seem to offer redwood. Plenty of cedar, precut and self assembly that cost way more than buying redwood lumber and getting a real carpenter to build it.  The redwood lumber for the pergola cost so much that I knew it would be foolhardy to attempt to build it myself. Besides,I knew an excellent carpenter who would give me a reasonable price on the labor. My friend, Jimmy Quenelle and his helper Steve did the entire job from start to finish in two days.

Jimmy helped me settle on the design for the pergola and pretty much made it to measure for my yard. He laid concrete foundations for the four posts and sunk steel braces into the concrete. These then held the upright posts so that none of the wood would be touching soil. 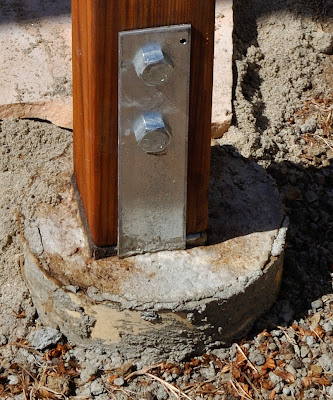 This structure is probably sturdier than our house. You can hang a swing from it. In fact, Jimmy and Steve swung hand-over-hand like moneys from it to prove how strong it was. They are both over 6’4! When the big earthquake comes it will be the only thing standing on our property. Jimmy did an amazing job, with great attention to detail, making sure that I got exactly what I had envisioned in my head. If anyone who lives in Santa Clara wants more details, send me a comment (not for publishing online) and I’ll put you in touch with him.

With the pergola built, the next step was to get the sandstone pavers. My Husband and I went to Evergreen Supplies, a family run business near us in San Jose. Everyone who works there claims to be one of a squad of brothers…even the girls. Okay, I jest…

A recurring problem with small garden projects like ours is that the shop would not deliver anything smaller than a pallet of pavers and that was more than twice what we needed. So we borrowed a truck from our friends Cathy and Tom (who have just launched a great kickstarter project – click here for more details if you love Lord of the Rings.)

Neither My Husband nor I are very big, so it was with a great deal of effort that we hauled eighteen huge twelve-foot-square slabs of rock home. It took a couple of runs, but we got there in the end.

We’d researched online how to lay pavers. We wanted a more “crazy paving” style with ground cover growing in between the cracks. After much debate we settled on a layer of sand as a base rather than setting them on the bare dirt, or the base gravel, cement foundation rigmarole they talked a lot about. I hope the whole damn thing doesn’t disappear when the rains come! 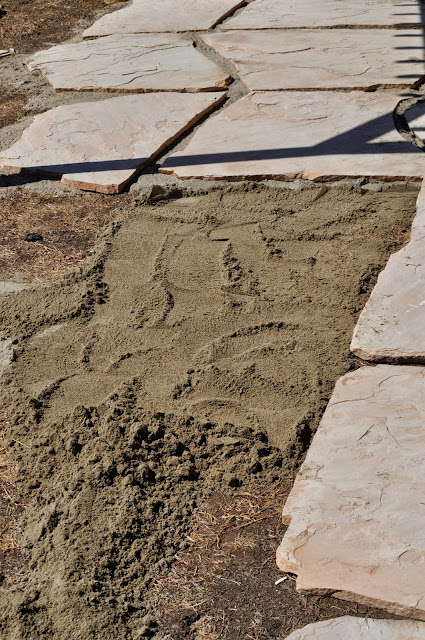 My Husband still marvels at how our giant jig-saw puzzle all seemed to just fit together. What he should really be marveling at is how his wife managed to maneuver them into place by herself when he was at work! It was another one of those days where I thought, “If I had a job I’d not have to do hard labor…if I was in jail I wouldn’t have to  work this hard!”

But finally, it was done. 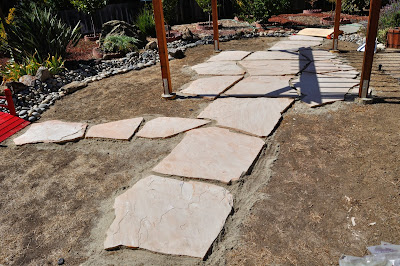 After not one, not two, but three trips to the local DIY store, I had all the bark mulch laid. I really should have measured and calculated rather that cast an eye and guestimated.

The mulch is really just to keep moisture in the soil when I plant it out. Although all the weed seeds were killed in the soil by the solarization, wind-born seeds will have been deposited in the short time the ground has been left bare. You never completely win the war against weeds.

I couldn’t decide which of the photos of the finished job was the best so I posted them all. 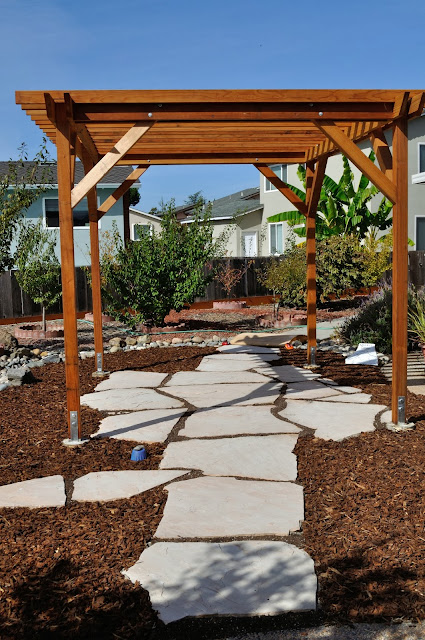 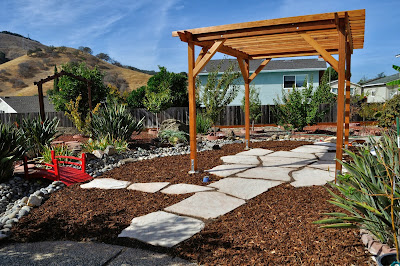 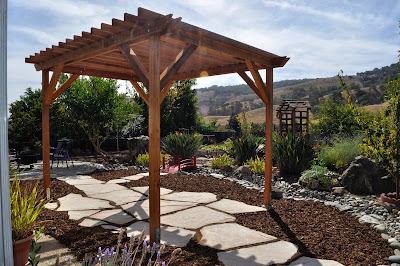 When the rain comes I’ll get to the soft furnishings…plants! I’ll probably leave off putting up shade cloth, curtains and furniture until after the winter.

In the meantime I’m looking forward to using the green thumb again!