My wonderful neighbor, Al, let me strip his tree of the ripe peaches that were threatening to drop. They were simply perfect. 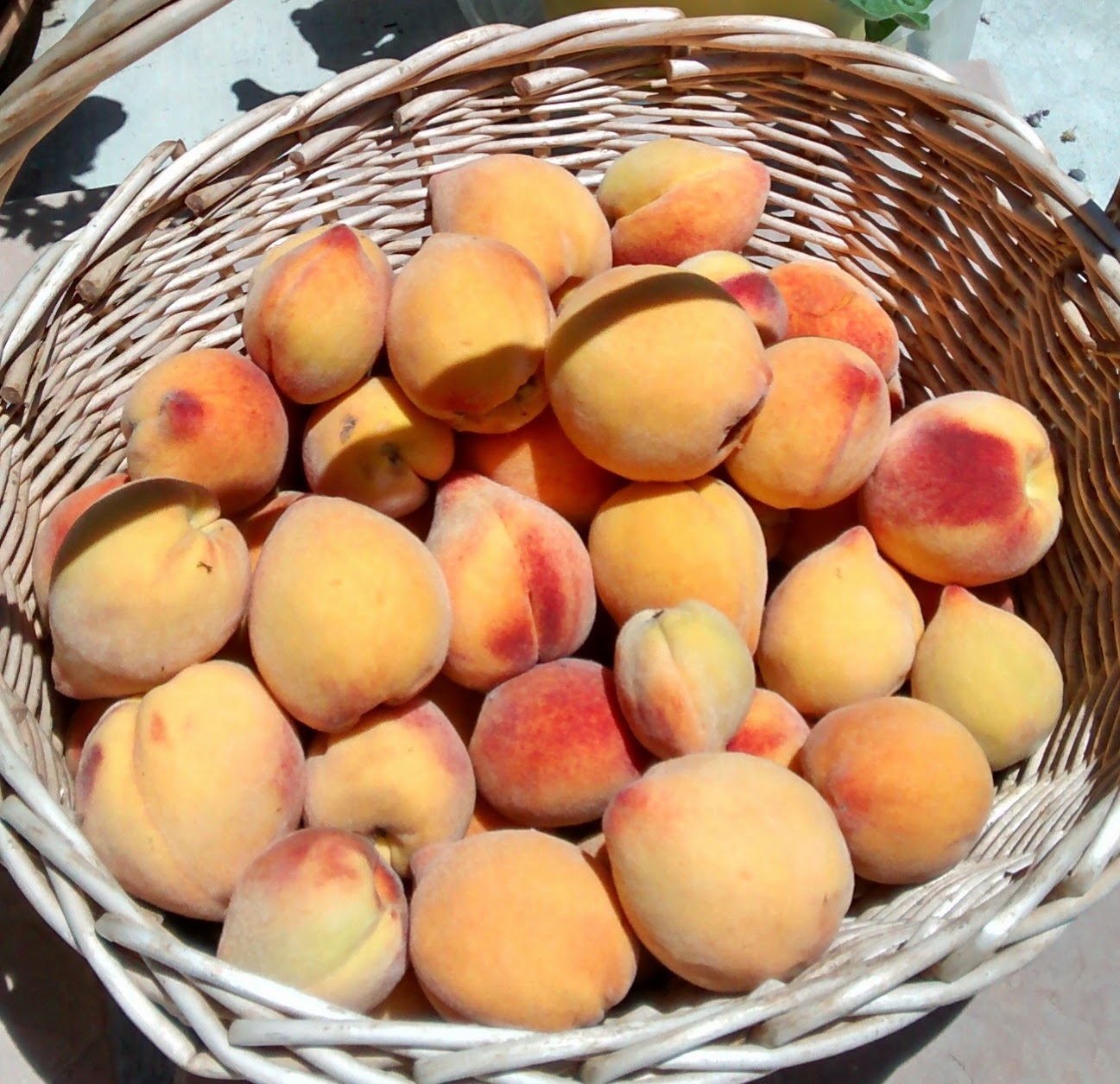 I went online to see how I could freeze peaches. Lots of articles gave advice using sugar, and some even used some chemical to preserve the color, but I really didn’t like to add any of these. Then I saw a post in a chat room about simply freezing the peaches whole with their skins on. So I experimented and am happy to report that, yes, it works quite well. When thawing, simply pop the peach into warm water and the skin slides off. The rest of the peach defrosts in about 10 minutes. The texture is affected – its not quite the same as eating it fresh but it is great for use in smoothies – mine was a tomato, spearmint and peach smoothie – total yum! The frozen peaches can also be used in baking and making sauces and jams. Speaking of which…

Yesterday I made a jam, a salsa and a crumble…

Click on the title to take you to the recipe on the Love and Olive Oil Blog.

I loved how they extracted the lavender taste from the leaves giving a delicate hint of floral flavor –soak two tablespoons of lavender flowers in boiling water for twenty minutes, strain off the flowers and add the water to the fruit. 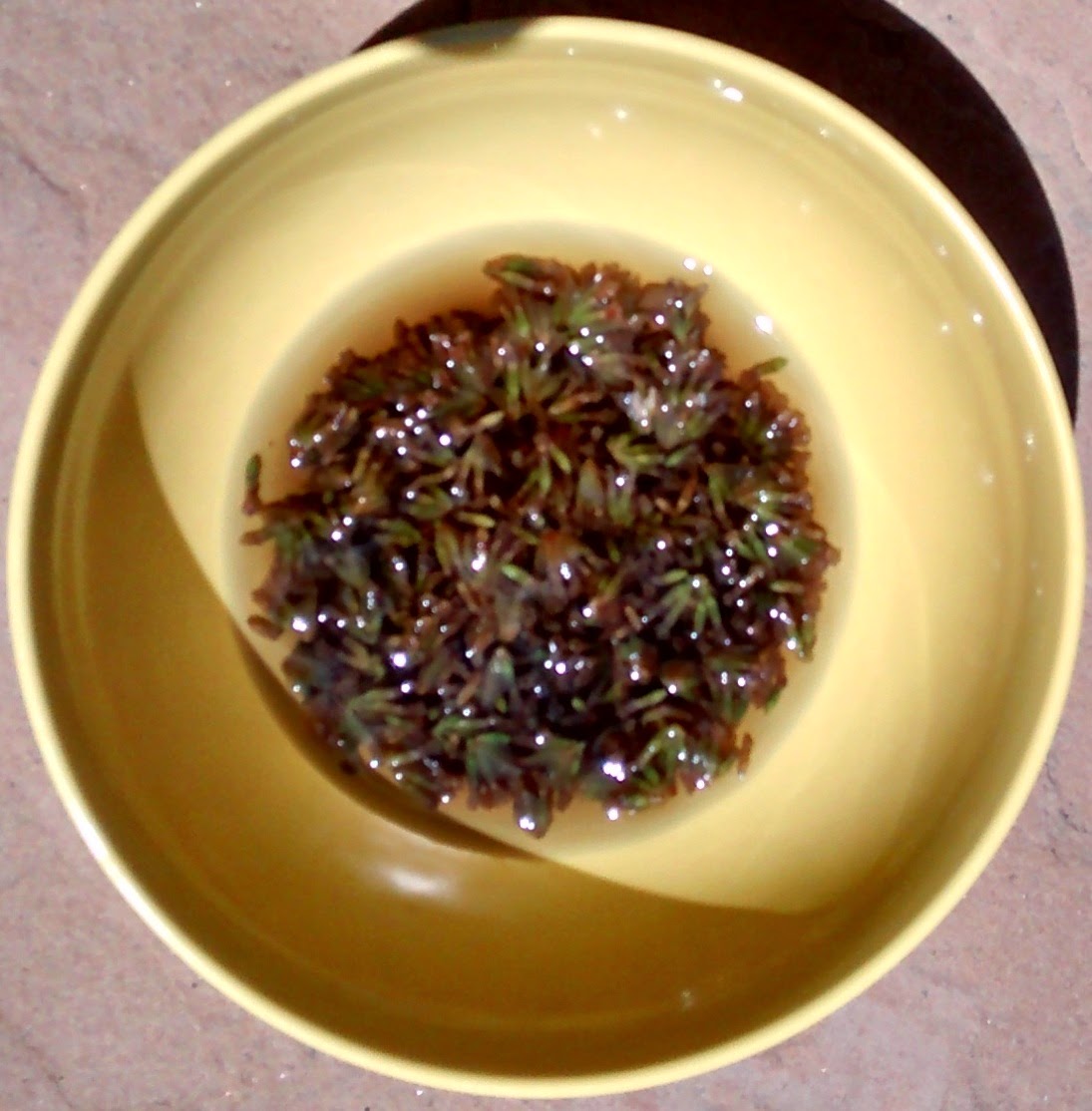 You can do this to add lavender to a lot of recipes. I even made up a recipe of my own. More about that later…

The jam was amazing and My Husband practically took a spoon to it. He’s exasperatingly picky with food, so I was very pleased!

This recipe is from the blog “She Wears Many Hats.” (Don’t we all, darlin”?)

I’m not very up on Mexican food, and I don’t know if cilantro is a must in salsa, but the aim of this salsa was to prepare it from ingredients that came from either Al’s garden or mine. Therefore, I had to substitute some items…like basil instead of cilantro, since cilantro is currently blooming in my garden only and therefore not so nice to eat. Also, I used a bunching onion instead of a red onion and lemon instead of lime since Al’s lime tree is still in recovery after the cold snap that nearly killed it last November. 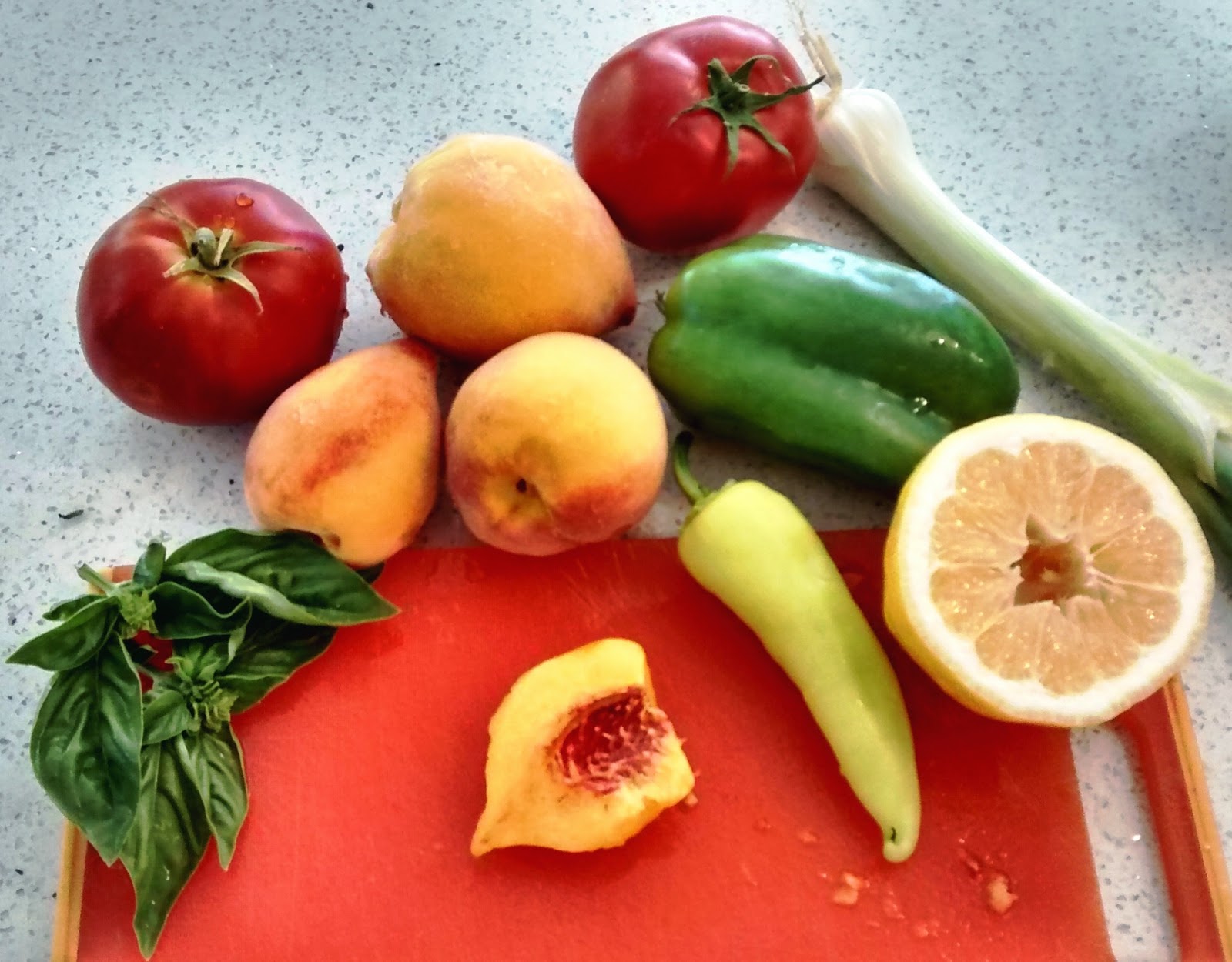 Don’t the ingredients make a pretty picture? The tomatoes, peaches and lemon were from Al’s garden. 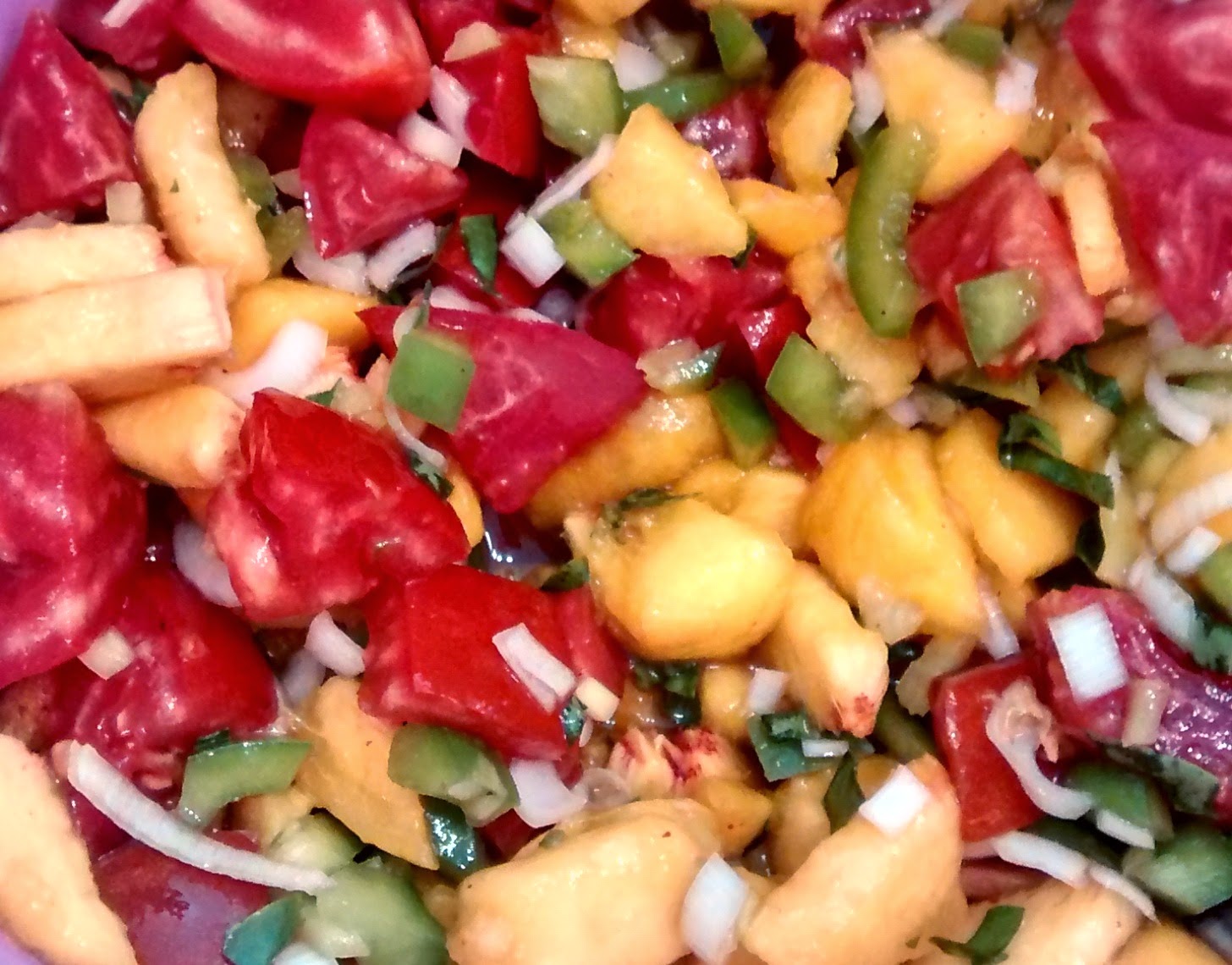 The salsa tasted even better than it looked.

I followed the recipe in the link above but doubled the ingredients for the crust as I typically find there isn’t a thick enough crust. 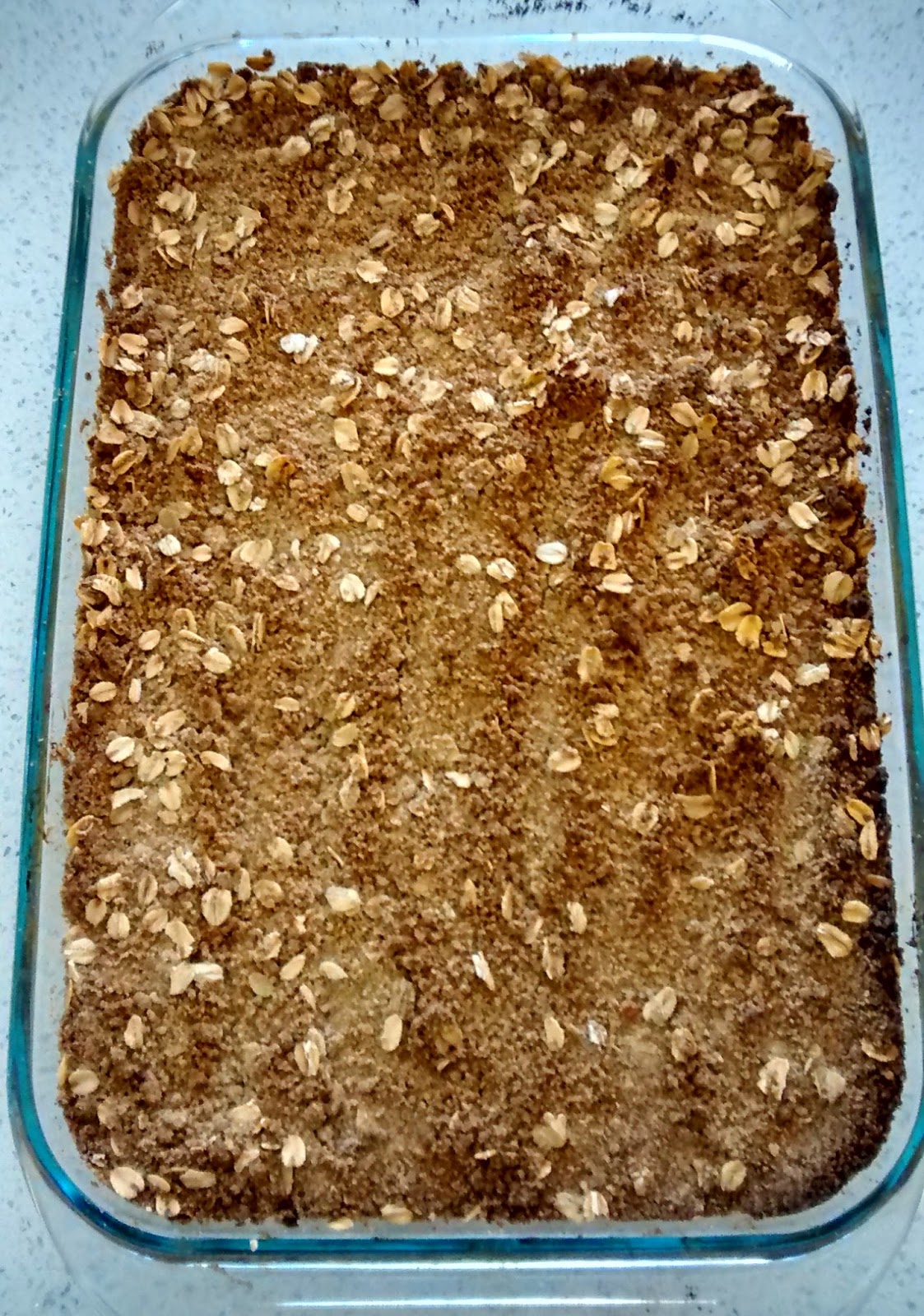 The crust was great, but the layer of peaches was too thin and seemed to get absorbed totally into the crust. 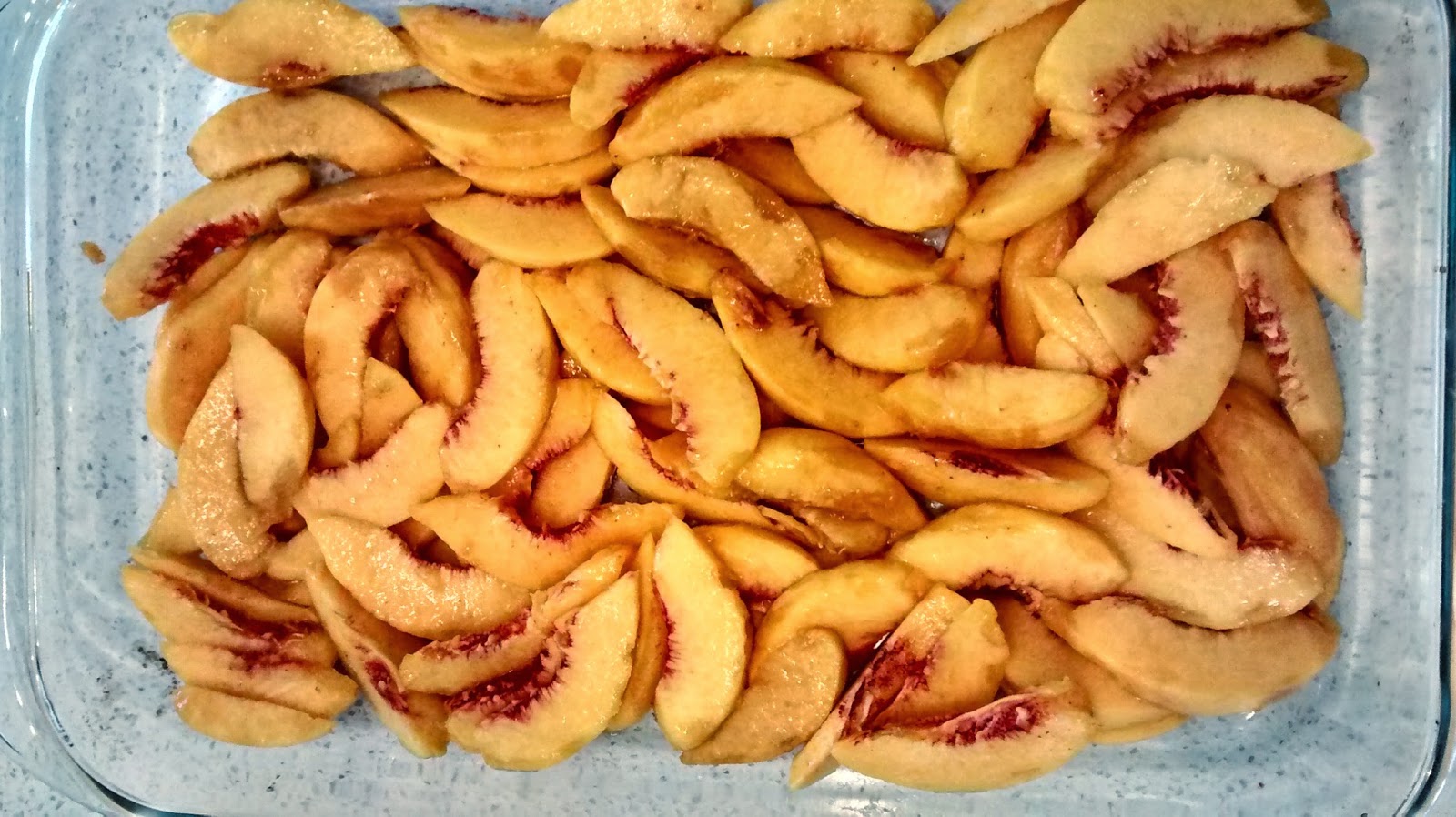 My Husband prefers a dryer crust dessert anyways, so he was happy, but I’d have liked more peaches. Next time I’d use a smaller dish 8X8, with the quantities from the original recipe.

So this is where I invented my own sauce to go with the crumble. When I researched the recipes, every single one of them  added cinnamon. It’s not that I don’t like cinnamon, but why does it have to be added to every single dessert in America? Apple pie, pumpkin pie and now this?

So here’s what I came up with… 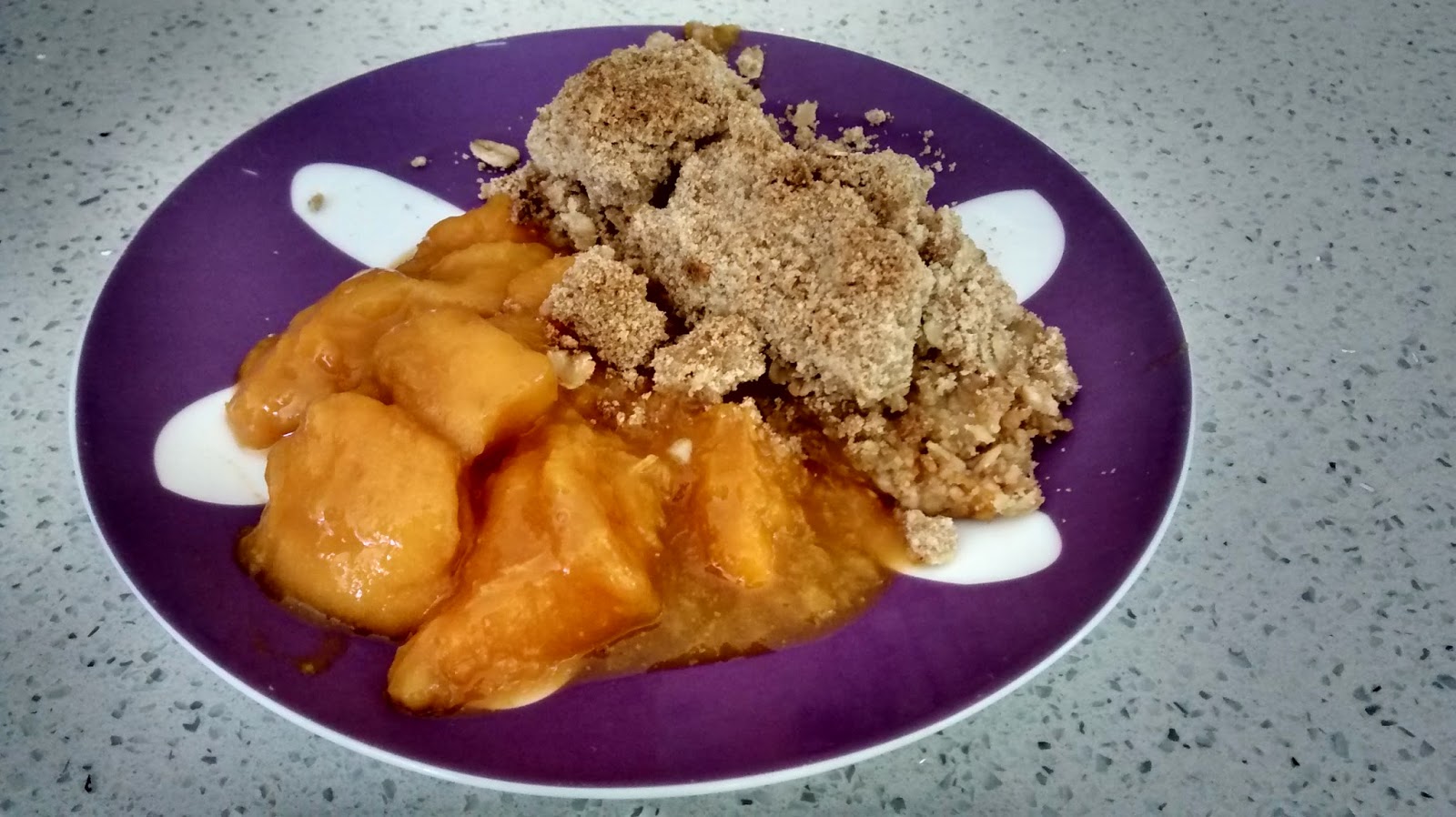 Now you can have it any way you like – so long as it’s peachy!